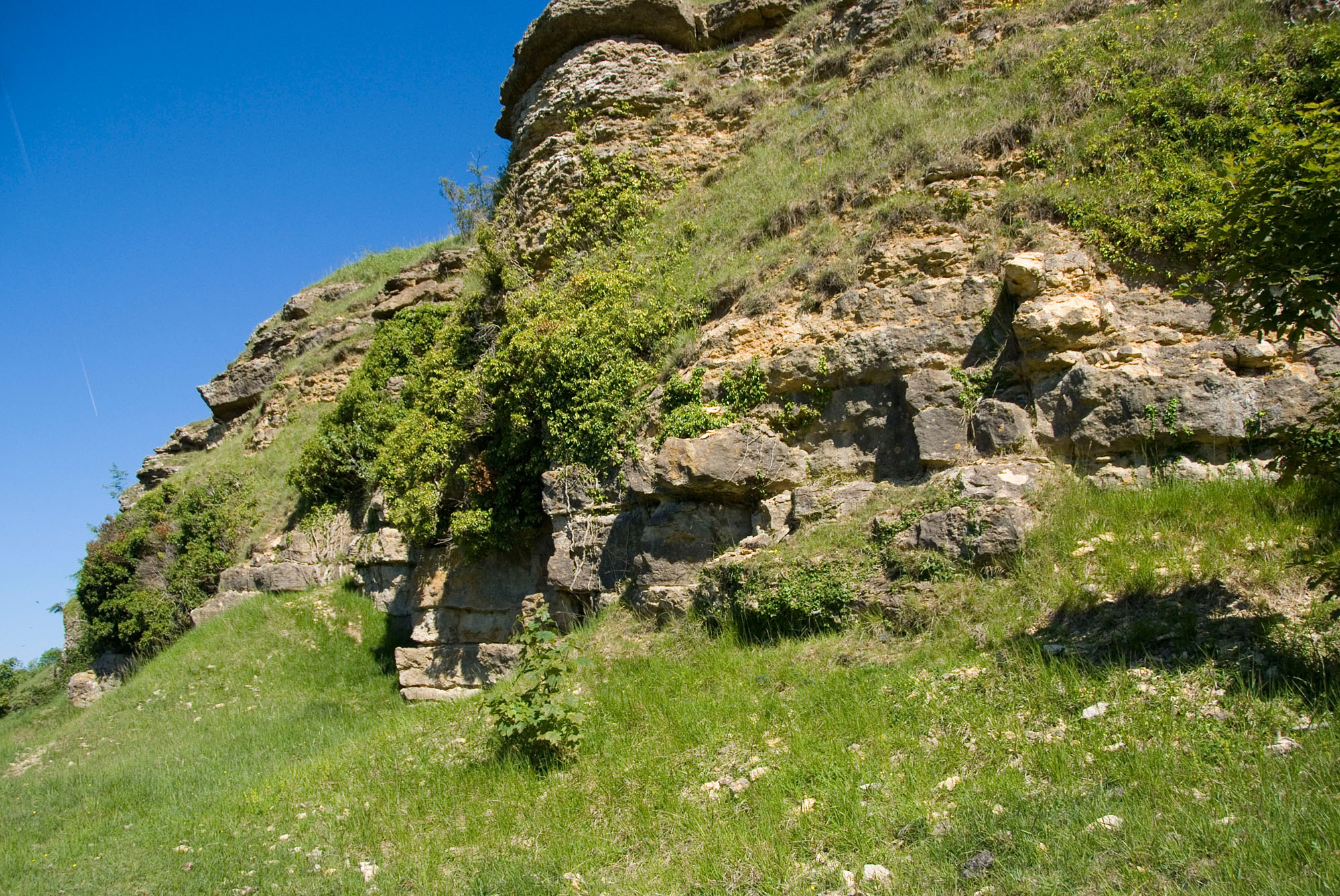 Crickley Hill is now part of a national park, where there is an official geological trail with an Iron Age hill fort nearby. There are a few sites along the official guide taking you through the geological history of the area, but this guide concentrates on the Crickley Member (formerly known as Pea Grit) quarry of the Birdlip Limestone.

♦ From the A436, immediately after the roundabout (if travelling from the west), you will see a signpost to the Crickley Hill Country Park. Follow this road.
♦ Shortly after the turnoff, another road will turn off to the left also signposted to the Crickley Hill Country Park. You will arrive at a large car park with a visitor centre.
♦ Walk past the visitor centre and, just before the road that goes down to the lower part of the car park, there is a gate with different trail colour bandings. Take this gate and follow the path round.
♦ The footpath will come to an open area. Walk across the open area in the same direction until you reach the wall. Here, you can find a suitable area to descend or follow the wall to the right.
♦ Ref: 51.84474°N, 2.10333°W

FIND FREQUENCY: ♦ – This site is over 100 years old and part of an official trail that is over picked by collectors, so the chance of finding good fossils is low.
CHILDREN: ♦ – The site has steep sides and access is difficult. The actual country park is suitable for children, but not for collecting fossils, especially this quarry.
ACCESS: ♦♦ – The country park is easy to find, but the quarry is not and is difficult to access, in spite of being part of the official geological trail. Toilets, a visitor centre and large car park are all onsite.
TYPE: – This is a disused quarry, which is over 100 years old. Fossils can be found in the scree slopes.

The formerly-named Pea Grit, now the Crickley Member is extremely fossiliferous and contains echinoids, brachiopods, bivalves and corals. These can all be found at the Pea Grit Quarry. The quarry is now over 100 years old and mostly overgrown. However, since the quarry is quite large, there are still faces and scree to search through.

The problem with this site is that the actual quarry is difficult to access. Once you arrive at the site, you will notice a wall running around the edge of the hill and, over this wall, is the quarry. You will have to descend the hill and get over the wall to reach the beds. This is not easy and it can be both steep and dangerous.

However, there is an alternative site. Follow the wall around to the right and, where the wall ends, you will find some scree slopes and outcrops along the southeast of the hill. These are much easier to access, but are not anywhere near as productive as the main quarry.

Since this site is now over 100 years and part of an official trail, it has been picked over by many collectors. Being also overgrown, it is uncommon to find any good fossils at this site. Having said that, complete echinoids and brachiopods do turn up.

This old quarry was once worked by hand to supply stone for walling and mending roads. The quarry cuts through the Pea Grit (Crickley Member) and runs up into the base of the formerly named Lower Freestone, now the Cleeve Cloud Member. The Crickley Member of the Birdlip Limestone Formation intervenes between the Cleeve Cloud and Leckhampton members.

At Crickley Hill, the rocks are all part of the Birdlip Limestone Formation (Inferior Oolite Group), which is Middle Jurassic (Aalenian) in age.

The quarry is along the edge of a hill with steep sides. Access to the main part of the quarry is by climbing over a wall and descending steep slopes. Therefore, this site is only for experienced walkers. Take extreme care and do not visit when the rocks are wet, as this will make the descent too dangerous.

All you need is a good eye. This site is a SSSI, so you can only collect from the scree slopes. A pick might be handy to split any material in the scree slopes, and paper to wrap your finds.