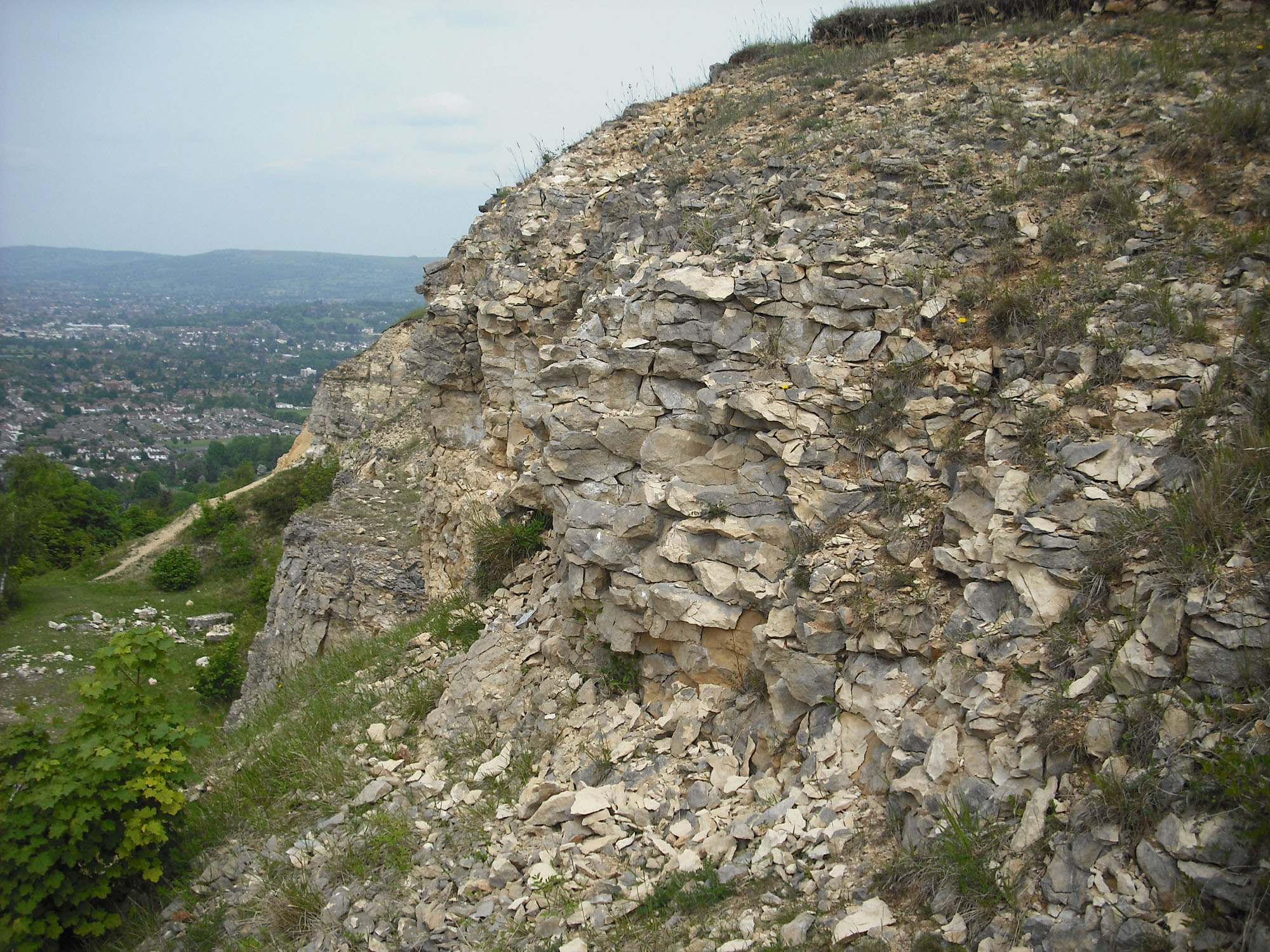 A pleasant few hours can be spent at Leckhampton Hill. There are numerous old quarry faces with piles of scree to investigate. Fossils are not abundant but, with patience, some should be collected. The views from this hill are impressive and the walk to the various sites is an enjoyable (if hilly) one.

♦ Leaving Leckhampton going south on the B4070, take Daisy Bank Road on your left, just after you turn right while on the steep hill. You will soon come to a car park. Park here.
♦ From the car park, follow the path on the right into the woods.
♦ Keeping as far to the right as possible, climb the hill and, at the top, you will come to the first fossil hunting site, which is an old quarry with the bases of old lime kilns still in place.
♦ Ref: 51.85820°N, 2.07955°W

FIND FREQUENCY: ♦♦♦ – At the first site, careful searching of weathered material on the right hand side of the exposure should produce some brachiopods and possibly other fossils. At the second site, you may find rock with many bivalves and brachiopods, but these are mostly broken. The third section yield imprints of the bivalve Trigonia and brachiopods.
CHILDREN: ♦♦♦ – There is quite a walk to investigate all of the available hunting areas and the landscape is very hilly. In some places, there are high, unfenced drops. This site is unsuitable for very young fossil hunters, but older children, properly supervised, should be fine.
ACCESS: ♦♦ – There are no toilets or other facilities here. The car park can be hard to find, so consult a map first. Similarly, the old quarries may elude you if you do not have a good map and a compass. The walk to the fossil hunting areas is not for the unfit. This walk takes you along a geological trail and there are six sites to visit in total. We recommend the guide referred to at the bottom of this page, as it will explain access for each site.
TYPE: – Fossils are mostly found in the scree, weathered rock and the earth below fossiliferous strata in the old quarry faces. Searching through the earth below weathering outcrops is the best way to find fossils. There are around six sites to visit along the route, with five main quarries. We recommended the guide featured at the bottom of the page, if exploring this area.

Various fossils can be found at this location with some effort. There are three main exposures to visit, each offering different strata. You may not go home with too many specimens, but you should be able to pick up a handful.

At the first site, it is worth investigating the weathered material below the cliff face, but the best collecting is at the right hand end, where brachiopods and other fossils can be found in the earthy material at the top of the face. However, the ‘peas’ of the Pea Grit has weathered to effectively camouflage the brachiopods, as they are of a similar size and shape. The quarry faces and their scree accumulations above this site are unfossiliferous.

To get to the next fossiliferous site, carry on up the hill, heading southwest. You should come across a large quarry face on your left. Check the rocks at the base of this for fossils. From this point, it is a short walk to view the Devil’s Chimney, a relic from the hill’s quarrying past.

To reach the third site, you need to climb the hill to the right of the face, up to the top. Walk east and a little north across the plateau, past the Iron Age camp and barrow. Continue until you see a gate to your right, which has a path cut into a metre rock on the left hand side, and a fence and field on the right.

Walk along this path, investigating the exposure where it appears weathered. This rock is Trigonia Grit in which you may be able to find impressions of the eponymous bivalve, Trigonia, in it. Continue along this path until you get to a gate. Just before this, to your right and below, is a small exposure of weathered material. It is worth looking through this for brachiopods. Through the gate and to the right are the remains of a very shallow quarry. Look in the weathered material at the top of the quarry sides for brachiopods.

The Jurassic rocks of Leckhampton Hill are Bajocian and Aalenian in age and are part of the Inferior Oolite Group.

Leckhampton Hill contains many natural and quarried rock outcrops as well as gravel pits and landslip features on the top and the slopes of the Cotswolds scarp.

There are six sites to visit along this trail, with four main quarries covering different geological times:

Dead Man’s Quarry. This contains the base of the Lower Trigonia Grit Member of the Aston Limestone Formation at the base above which are the Scottsquar Hill Member and lowest beds of the Cleeve Cloud Member.

Firsbrake Quarry. This contains the middle part of the Cleeve Cloud Member of the Birdlip Limestone Formation

The Cleeve Cloud Member corresponds with the Lower Freestone of previous accounts. Within the Farmington area, it rests directly on the Leckhampton Member.

To the west, the Crickley Member (formerly Lower Limestone and Pea Grit) intervenes between the Cleeve Cloud and Leckhampton members.

The Cleeve Cloud Member crops out on steep lower slopes of the valleys of the area. Typically, it is a thinly bedded, very well-sorted, fine to medium grained, compact ooid grainstone, which forms a brash of platy fragments. Coarser-grained beds also occur, and in some cases these contain a certain amount of shell debris.

White, grey and black clay above limestones of the Harford Member are now totally obscured.

The Aston Limestone Formation is exactly equivalent to the Middle Inferior Oolite of previous accounts. It is divisible into three members,

NOTGROVE MEMBER. Formerly the Notgrove Freestone, this rock is a grey, well-sorted, medium-grained ooid grainstone. The upper surface, beneath the Salperton Formaton, is commonly encrusted by oysters and intensely bored by annelid worms.

The Upper Trigonia Grit Member forms the basal unit of the Salperton Limestone Formation (Upper Inferior Oolite) over much of the Cotswolds region. Typically, it is a hard, grey to brown, very shelly, shell fragment and ooidgrainstone to packstone.

The beds are commonly fossiliferous, with common echinoids (Clypeus ploti especially near the top), brachiopods (notably Stiphrothyris spp. and Sphaeroidothyris), and moulds of myid bivalves.

The key value of the geology of the area is the potentially complete exposure of the whole of the Lower Inferior Oolite formation in one outcrop area – a feature almost unique in the Cotswolds.  The rock exposures are all classified as nationally important and the landslip and gravel sites as Regionally important.

The site exposes a 60 metre section of Jurassic sediments. These rocks were laid down in a shallow marine environment some 165 – 170 million years ago. These rocks exposed in the quarries on and under Leckhampton Hill, are a thick series of limestones that extend along the Cotswold scarp. They are important for the fossils they contain and the evidence of past conditions and processes they represent.

The exposures cover over 1 mile of broken outcrop and are predominantly within the Cleeve Cloud member (Lower Freestone). The main cliffs rise from 720ft at the top Whitby Mudstone (Upper Lias) to 955ft at the top of the cliffs within the Notgrove Member.

In some places, there are high, unfenced drops. This site is unsuitable for very young fossil hunters but older children, properly supervised, should be fine. Ensure that you keep well away from the cliff face, from which rocks can frequently fall. We recommend wearing a hard hat and be aware that it is easy to slip on the scree slopes, so care must be taken.

Sturdy footwear, some packing material, a bag and some food and drink should suffice at this location. However, a small trowel might also come in handy for sifting through the earth below the faces. A hard hat is highly recommended if collecting near the cliff faces.