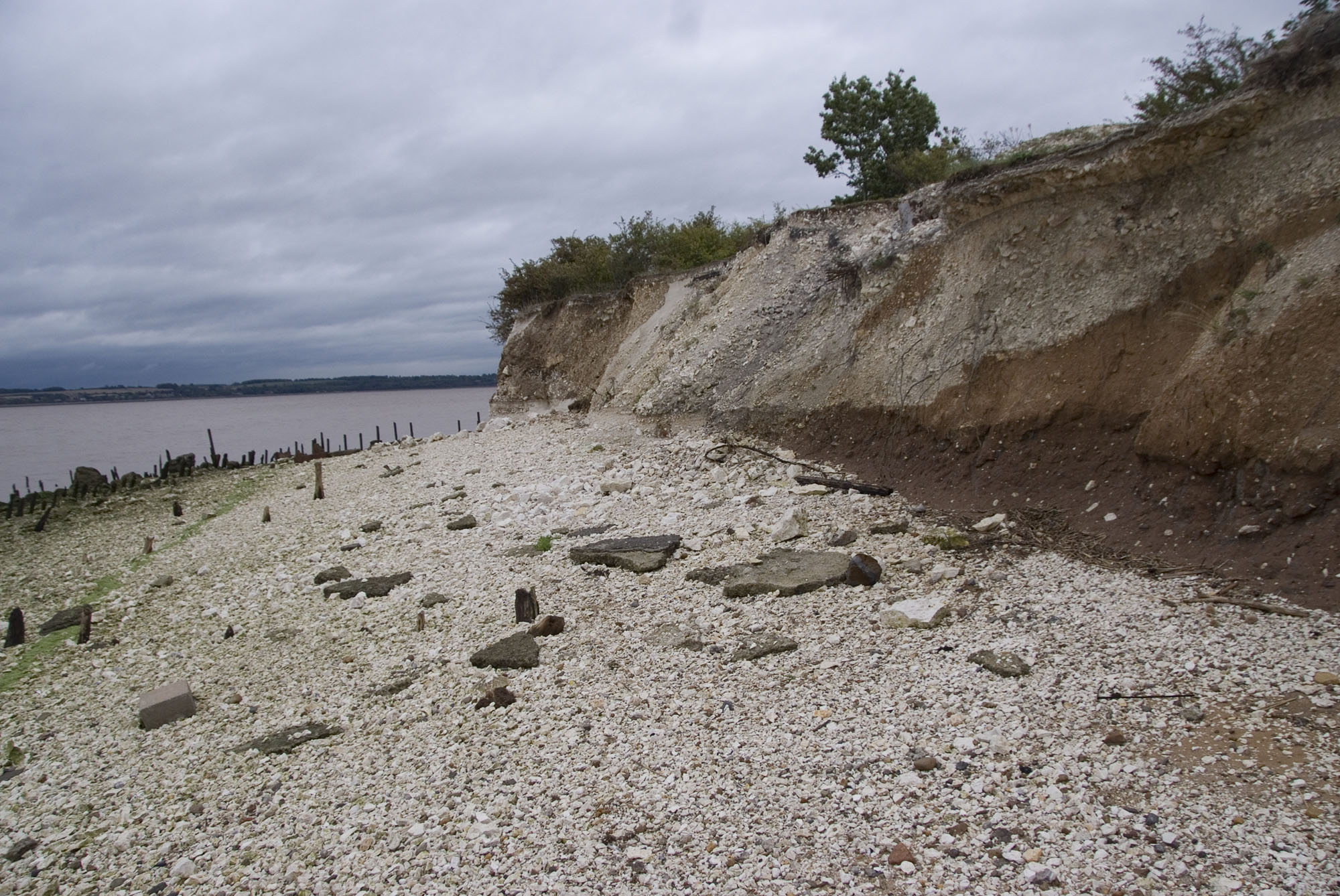 The South Ferriby Quarries used to be a classic site for fossil hunting. Since becoming disused and the land privately owned, the sites are now overgrown and/or have prohibited access. However, the back of these quarries are now being eroded by the River Humber. As a result, public access to the cliffs along the river banks provides plenty of opportunity to find fossils.

♦ From the A15, head towards South Ferriby along the A1077. As soon as you reach the town, where the road descends the hill and veers southwards, take the road on the right.
♦ Follow this northeast, where you will see quarry warning signs stating there is no right of access. Park here and walk up the road. Just before the quarry, which is on the left at the top (you can’t miss it, as it has plenty of red warning signs of private and no access), you will see a spoil heap on the left.
♦ Follow the footpath, which will take you to the banks of the River Humber.
♦ Walk eastwards and you will come to cliffs of quarry scree and rocks. The river foreshore here is full of rocks and pebbles for you to look through.
♦ Ref: 53.686502, -0.493574

FIND FREQUENCY: ♦♦♦ – It may take time, but after splitting a few rocks and searching the scree, you should be able to find some fossils here. Ammonites and bivalves are the most common.
CHILDREN: ♦♦♦ – Providing children are supervised, they can visit this site. However, keep away from the water’s edge at all times.
ACCESS: ♦♦♦ – Park outside the old quarry road, just before signs saying no vehicles beyond this point, and walk down the road. From here, it is a short distance to the foreshore and the old quarry spoil heap.
TYPE: – This location is a series of cliffs along river banks. The cliffs cut into the scree slopes at the back of the disused quarries, access to which is strictly prohibited. However, the foreshore of the River Humber is publically accessible. There are no restrictions for collecting and visiting the cliffs at South Ferriby Cliffs. However, you must not visit the disused quarries themselves.

Once a classic site for Kimmeridge Clay (Upper Jurassic) fossils, the old quarries are now not publically accessible. However, in recent years, erosion along the banks of the River Humber is cutting into the back of the quarry. As a result, the foreshore is full of chalk boulders and pebbles, with (very occasionally) red chalk and rock from the Jurassic. However, nearly all the rocks are from the Lower Ferriby Formation and can contain echinoids (Holaster), ammonites and bivalves.

If you are really lucky, rocks from the red Chalk (Albian) can be found, containing fossils such as bivalves, brachiopods and belemnites, and in the Kimmeridge Clay brachiopods and some superb ammonites. However, since the Jurassic layers were at the very bottom of the old quarries, these rocks are rarely seen along the banks, although you should find some red chalk lying around. Split open the boulders lying around on the foreshore and search the scree for loose fossils.

The cliffs at South Ferriby are made up of red and white chalk scree from the disused quarries, together with the occasional Jurassic rocks.

The old quarries at South Ferriby used to be extremely interesting, consisting of both Upper Jurassic and Cretaceous strata.

The scree slopes along the river consists of potentially all of various zones from the old quarries, which can all be found along the foreshore and in the scree.

The foreshore can be steep and slippery, so care must be taken when walking to the location. In addition, the trackway is used by large vehicles, so keep away from any using this road, and park outside the gate.

A hammer and safety goggles are essential for splitting open boulders. Suitable footwear should also be worn. Fossils are very fragile here, and should be wrapped up carefully and placed in containers.