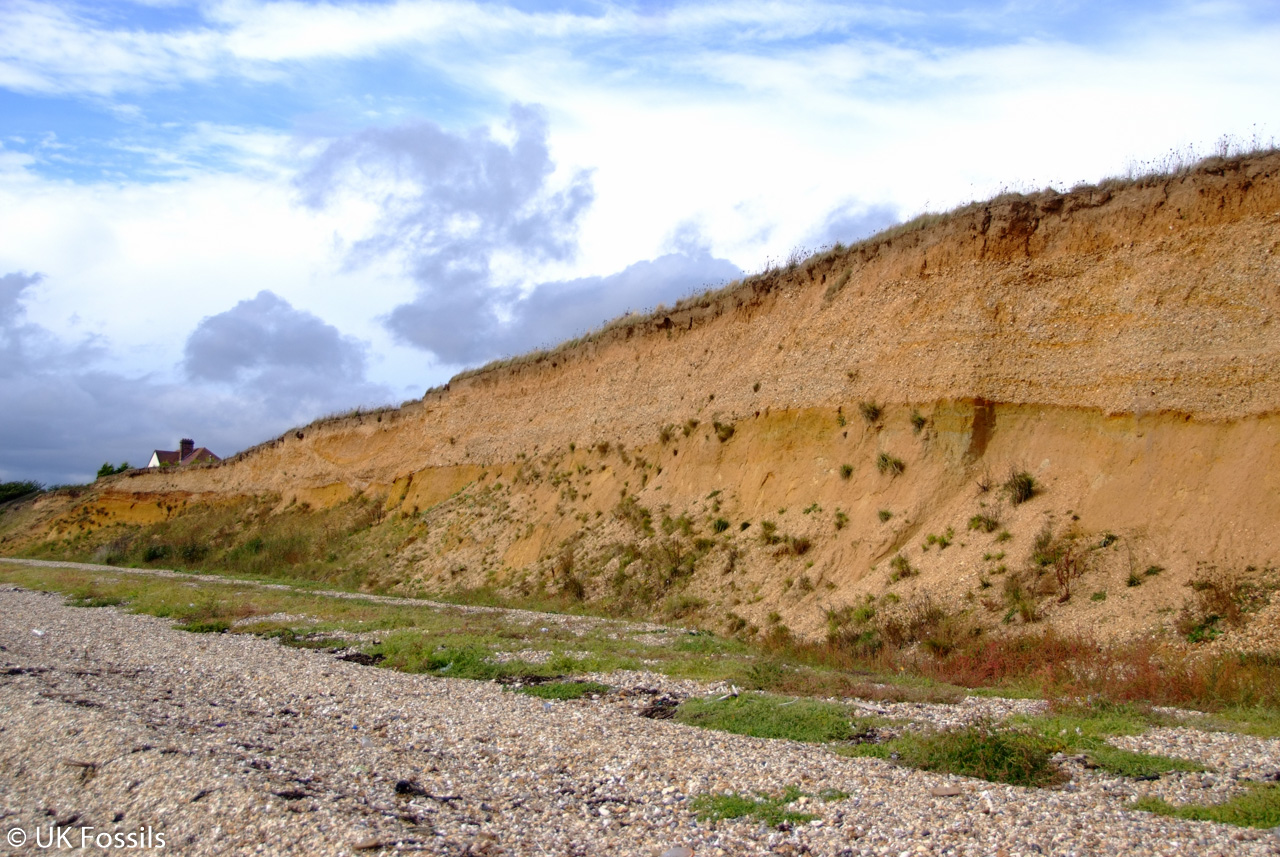 At Brownwich Cliff, fossiliferous septarian nodules of Bracklesham age are washed onto the shore from offshore deposits. The cliffs at both Brownwich Cliff and Chilling Cliff can occasionally yield fossil molluscs, but the best deposits are those from below beach level, which are full of brachiopods and other molluscs. Pleistocene remains can also be found washed from the gravel beds.

♦ Due to restrictions on access from Brownwich Farm along a private road and at Chilling, where the road is now closed by a gate, the only real access is from the main car park west of Stubbington, near Hill Head.
♦ From the M27, exit at Junction 9 and head towards Fareham. Keep on the A27 until you reach Titchfield and then take the B3334 towards Stubbington.
♦ From here, make your way down to the coast and follow to the west, until you reach a car park with toilets, which is just past the bird reserve (Titchfield Haven) and the lighthouse.
♦ You can also get here using the narrow road from Meon.
♦ From the car park, walk west to the first cliff, which is Brownwich Cliff, and the second cliff, which is Chilling Cliff.
♦ Ref: 50.819042, -1.248995

FIND FREQUENCY: ♦♦♦ – Fossils are only really found in the very hard septarian nodules along the foreshore. Usually, there are only just a few of these lying around and so collecting can be limited. However, once you do find one, it will be full of fossil bivalves and gastropods. In addition, bones of mammals from the brickearth can be found washed out along the foreshore.
CHILDREN: ♦♦♦ – This location is suitable for children, with toilets onsite, and a suitable, although stony beach. It can be a long walk to Chilling Cliff for younger children, so we suggest that if you have young children, you should only visit Brownwich Cliff.
ACCESS: ♦♦♦ – Once at the car park, it is a long walk but easy to find. The problem is getting to the car park. Being part of the Southampton/Fareham district, this is a very busy area in which is easy to get lost. Therefore, an OS 1:50,000 map will come in very handy.
TYPE: – Fossils are found on the foreshore in large nodules washed onshore. Pleistocene bones can also be found washed from the gravel beds, especially at Chilling Cliff.

The Brickearth has revealed the bones of various mammals, although none of these have ever been recorded in an official study of this area, unlike other locations in Hampshire with similar Brickearth deposits. This layer is found at the top of the cliff and, after cliff falls, tides wash any bones (which are very light) along the foreshore. However, these tend to be fairly uncommon.

The Pleistocene gravels are mainly not fossiliferous, apart from the occasional mould of a mollusc. The fossiliferous beds are actually beneath beach level. For this reason, you are unlikely to find anything in the cliff, so you should rather search the foreshore for nodules.

The large brown, septarian nodules can be seen from some distance and can be found along the foreshore at either cliff. These look like nodules containing poorly preserved mollusc moulds. However, if you break them open, you will find brachiopods, gastropods and bivalves in excellent condition. However, the nodules can be a little hard to break, so a heavy hammer is recommended.

At the very top of these low cliffs (which are about 7m high) is Brickearth, a brown silt deposit with clay minerals suggesting it originated from nearby outcrops of chalk.

Below this at Brownwich Cliff, some good sections of Pleistocene river gravels can be seen. These overlie the Middle Eocene, Bracklesham Group of the Selsey Formation. The Bracklesham Beds consist of marine sandy clays with glauconite weathered to a brown colour at the surface. Large septarian nodules, which are highly fossiliferous, are found washed onshore from the fossiliferous Bracklesham strata below beach level.

Common sense when collecting at all locations should always be used and prior knowledge of tide times is important. However, at high tide, the water rarely reaches the base of the cliff, but during winter months and times of higher water, it is possible to get cut off. Cliff falls and landslips do occur, so keep away from the base of the cliff.

You will need a good heavy hammer and safety goggles to split the nodules and paper to wrap up any fossils. The outer shell of the molluscs can come away easily, so take with you some preserving liquid, such as PVA, or take larger lumps home for splitting in more convenient circumstances.