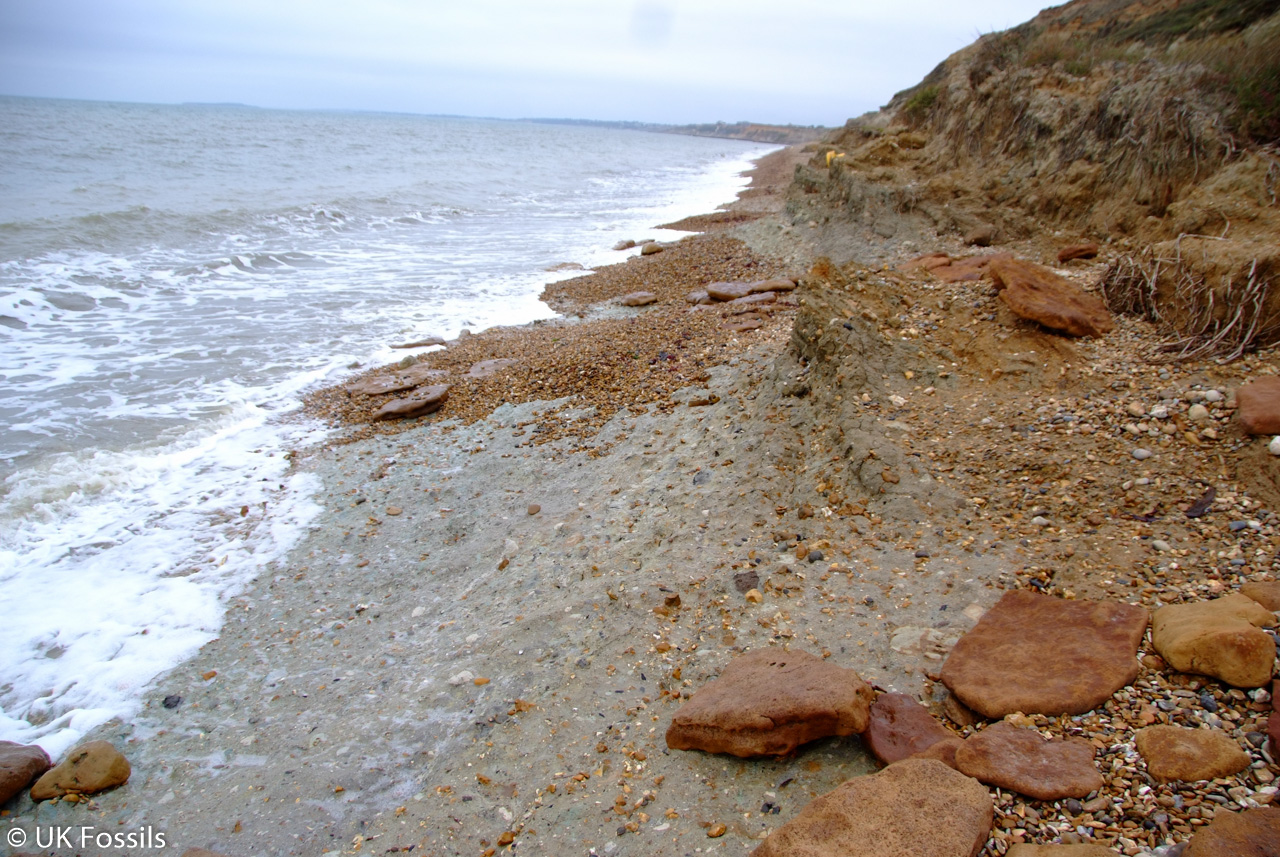 Milford on Sea provides an excellent opportunity to collect a wide range of fossil seeds from the Headon Hill Formation. These are in very good condition, but you will need to take samples home for processing using a sieve. Ironstones can also be found containing bivalves and gastropods.

♦ Take the B3058 from Barton on Sea to Milford on Sea, passing the Taddisford Gap (Hordle Cliff) car park. Continue until you get into Milford on Sea itself, where you will find a car park with toilets.
♦ From here, follow the steps and path down to the shore in between the beach huts. The beach is quite stony and it can be a difficult walk to the site.
♦ Continue along the beach, past the beach huts, until you come across a more vertical section of cliff with a clearly visible black band running along the middle of the cliff.
♦ Ref: 50.724972, -1.610559

FIND FREQUENCY: ♦♦♦ – The seed bed is packed with a large variety of well-preserved seeds. The only problem is finding it. While the bed can be easily identified by the black band, sometimes it can be obscured by slippages.
CHILDREN: ♦♦♦ – This location is suitable for older children. The beach is fairly safe up to the point where the cliffs become sheer. However, at the time of writing, the seed beds had slumped and you would now have to climb the slump along a narrow ledge to reach them. We do not recommend doing this and they are probably too high to collect from at the moment.
ACCESS: ♦♦♦ – The walk from the car park to the seed bed is not that far. However, it is along a stony beach, which can be hard going, especially if bringing back samples. Bear this in mind when collecting your samples.
TYPE: – Fossils are found by taking samples from the beds within the cliff. This can be dangerous, so take extra care.

This guide deals with the beds from Milford on Sea to just before Hordle. We have another guide – Taddiford Gap – that examines the main section at Hordle. Milford on Sea is an outstanding location for fossil seeds and the bed here is packed full with many different species. It can be identified by a black or dark blue band running between the pale clays. It is best to take samples from this dark band and sieve at home using 0.5mm sieves under running water. It is also best to let the samples soak in water for a few days to break down the clay before sieving.

The sediments above this band are also rich in small bivalves and gastropods, although these tend to break up fairly easily if you are not careful. On the foreshore, blocks of ironstone concretions can be seen washed out of the base of the cliff, which can contain very good bivalves and gastropods specimens, although they are very hard to break open.

The seed beds are part of the Uniobeds of the Headon Hill Formation. These make up nearly all the cliff at this end of Milford on Sea.

At the base of the cliff, the Chama bed contains large blocks of iron concretions. The shining, “mother-of-pearl” shells of the freshwater mussel Unio are common here, but often broken. They are not the most abundant fossils.

Gastropods, particularly Viviparus lentus, are conspicuous in almost every unit here. The very small gastropod Potamaclis turritissima (Forbes) is common but almost needs a hand lens to see it well. At the base of the fossiliferous beds in the cliff is a thin band with numerous seeds of the Water Soldier or Water Aloe.

At the very top of the cliff, Pleistocene gravels are followed by a thin ‘rodent’ bed, although rodents are rare.

Common sense when collecting at all locations should always be used and prior knowledge of tide times is essential. The sea at Milford on Sea often reaches the base of the cliff, where the seed beds are being washed out. The cliffs are also quite sheer and can be dangerous during wet conditions if they were to slip, or after fresh falls, when you can become stuck in the mud if you are not careful.

A trowel is important for taking samples and we recommend sieves of no greater than 0.5mm for sieving onsite. Sample bags are also essential if taking samples home with you.