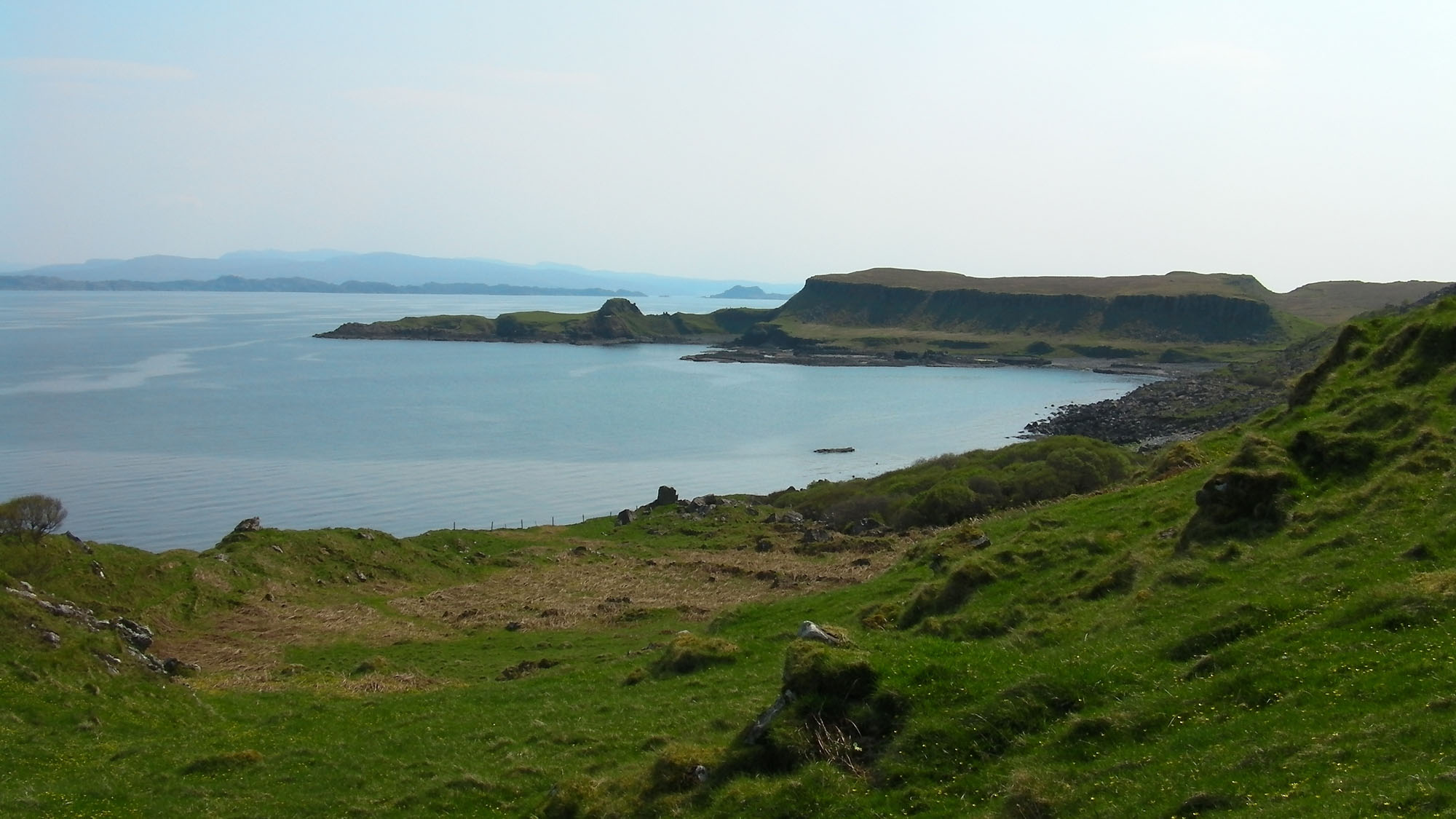 Valtos has the dramatic landscape to match its splendid name. This is the place to see some of Skye’s famous dinosaur footprints. As well as these amazing trace fossils, the Bathonian Upper Jurassic sedimentary rocks have yielded dinosaur bones in the past, and they are on display in the Hunterian Museum in Glasgow.

♦ From Portree, head north out of the town and take the A855 to Staffin.
♦ After Culnaknock, there is a memorial stone and lay-by on the left hand side of the road, which is just before the houses and a high, flat-topped cliff at Valtos.
♦ There is a small place to park for free at the memorial about 100m before the gate and point of entry. There is quite a short and easy descent to the shoreline, but it is here where you need to take care with the huge boulders.
♦ Ref: 57.59391°N, 6.15972°W

FIND FREQUENCY: ♦♦♦ – Fossils are not found in great numbers at Valtos, with fragments of wood and tiny bivalves being the most common. However, finding and photographing dinosaur footprints is a joy. These are in huge boulders and should be left alone for others to enjoy. There are also fossil fish remains, although it takes a trained eye to find them. The sedimentary layers and the number of fossils taper off the closer you get to the Kilt Rock waterfall. Valtos is best visited during a low tide, even although the famous Dun Dearg rockfall is well above the high tide line. There is also a small cliff, which the tides can reach.
CHILDREN: ♦ – Like most of the Skye locations, this is not for the faint-hearted. This is a tough terrain for small legs and the Dun Dearg rockfall has a lot of huge blocks lying on a tilted incline. Children should probably avoid this location. In addition, the closest cafe, shop and toilets are to the north in Staffin.
ACCESS: ♦♦♦ – There are a few tiny lay-bys on the road near Waterloo on which to park. Just ensure you do not block any entrances. This is a shortest walk for any Skye location.
TYPE: – There is a small place to park for free at the memorial, 100m before the gate and point of entry. There is quite a short and easy descent to the shoreline, but once on the foreshore, you need to take care with the huge boulders.

This is a SSSI and the dinosaur material must not be removed. This is a place to visit for the thrill rather than expecting to find a huge amount of fossils. However, dinosaur footprints can be quite common – you just have to look closely. There is also the chance of finding fish fragments (including teeth) and if they are in small loose rocks, they are better collected and studied at home rather than let the fierce Skye seas destroy them.
Skye has become famous for its recent dinosaur-related discoveries and Valtos has provided most of them. Sauropod and, more commonly, theropod footprints can be seen here once you get your eye in. These are found in very heavy rocks and boulders, and you should not attempt to remove them. Photograph them and leave them for others to marvel at.

A huge rockfall several decades ago has brought down huge blocks of sandstone. The Dun Dearg rockfall has an array of trace fossils throughout, and a tooth and a tail bone from a Coelophysis-type dinosaur were also discovered. Huge sandstone concretions protrude from the cliffs to make this an amazing sequence of Middle Jurassic rock.

Take time to visit the museum at Staffin, a couple of kilometres or so north of Valtos. Skye’s dinosaur bones, footprints, ammonites and other amazing fossils can be seen here. Opening times are hit and a miss, but you can arrange a visit. A personal guide by a local geologist, who is very familiar with the site, may be arranged. Contact Anthony Rybak on 01471 822640 (mobile no: 07931 512972) or e-mail him at: anthonyrybak321@btinternet.com.

The rocks here are upper Jurassic in age, being about 185myrs old. The Valtos Sandstone Formation is from the Bathonian stage and is part of the Great Estuarine Group. The rocks are interbedded sandstones, limestones and mudstones, 165 to 168 million years old. Two phases of progradation occurs here and the sandstone facies represents both deltaic and lagoonal conditions.

The formation is dominated by sandstone, medium- to coarse-grained, white to pale yellow, friable, cross-bedded in sets up to about 6m thick with prominent large (up to 1m in diameter), ovoid to near-spherical calcareous concretions or doggers produced following burial. Some of the medium-grained sandstones are significantly carbonaceous.

There are two lenses exposed at the foot of the fall to the waterfall at Kilt Rock, which contain the remains of a mass mortality of bivalves. These occur in massive numbers, but are quite soft and hard to retrieve.

This is a good place for trace fossils, including theropod footprints, ripple marks and worm casts. The famous Dun Dearg rockfall provides hours of rock hopping among huge slabs of tumbled boulders. Plant fossils can also be found.

There is very slow erosion here, but a hard hat is the safe option if you want to take a closer look at the cliffs. Visiting is best on a low tide. Dun Dearg rock fall has lots of massive rocks lying at obscure angles, so great care should be taken when clambering around on them.

A large mallet of at least 8kg and a cold chisel will suffice. Note that mobile phone reception is poor at best.

You will need a sharp cold chisel and an 8kg hammer. If you are approaching the cliffs, you should wear a hard hat. Mobile phone signals are poor here. Take a camera to record any dinosaur footprints you find (do not hammer them).