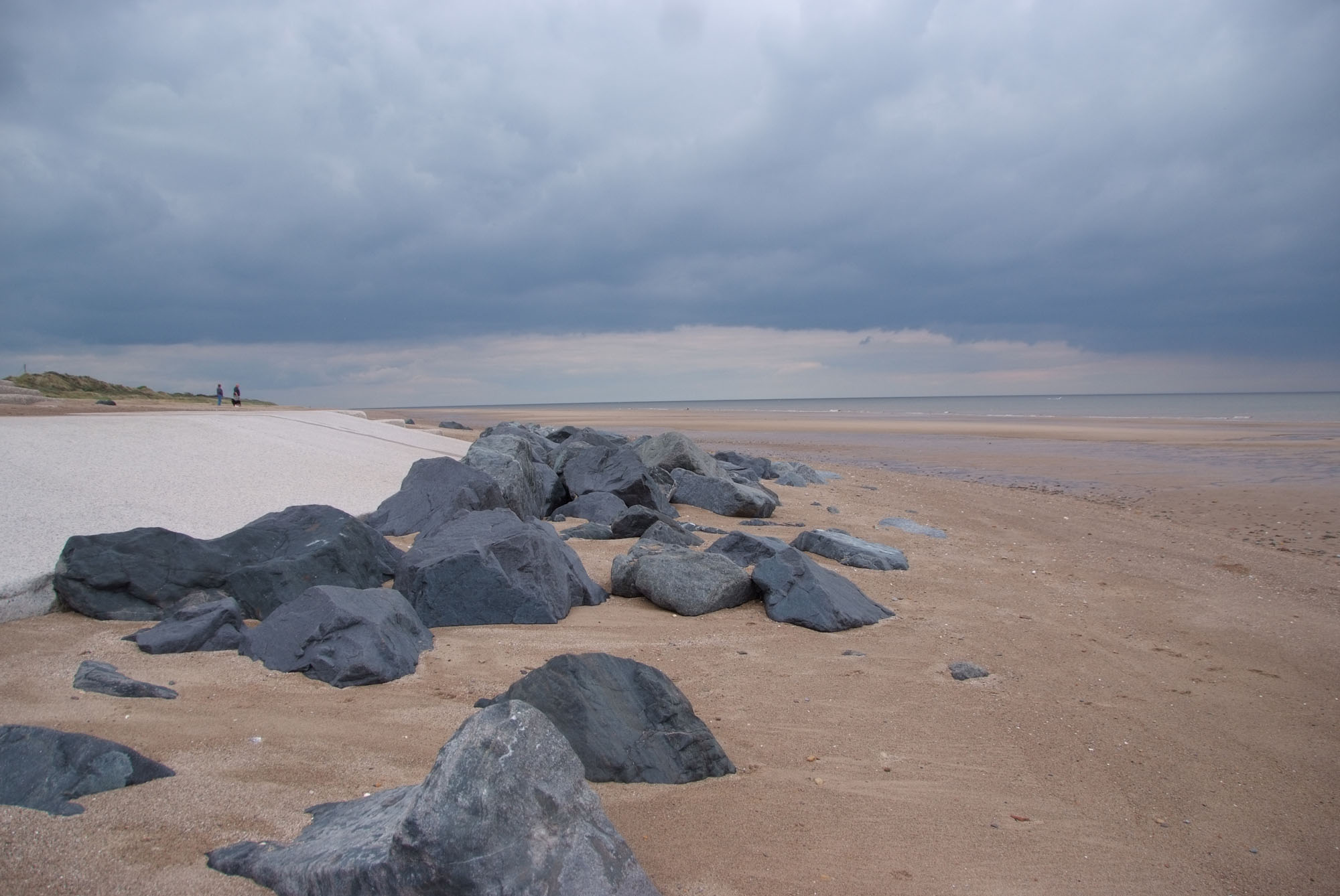 The area around Skegness is a very popular tourist area. While Lincolnshire is not a great county for fossils, rocks washed down from the Holderness coastline are dumped along its beaches. At low tide, these rocks can be seen at Chapel Point.

♦ Chapel Point can be found at the north end of Chapel St Leonards, along a minor coastal road. There is a free car park here, just on the corner of a bend, as you drive out of Chapel St Leonards. Park here, from where you will find easy access to the shore.
♦ The fossiliferous rocks can be found during low tides, around the concrete headland area.
♦ Ref: 53.223700, 0.33977151

FIND FREQUENCY: ♦♦ – Fossils can be found in boulders that have been washed down from Holderness. These are a mixture of rocks from the Carboniferous, Jurassic and Cretaceous. However, unlike at locations near Holderness, they are limited in number.
CHILDREN: ♦♦♦♦ – As with nearly all the beaches around Skegness, they are ideal for children. This location would have been rated ‘5-star’, except that the few granite boulders along the beach, which act as a coastal defence, can be dangerous if climbed by children.
ACCESS: ♦♦♦♦♦ – There is free parking, with very easy access. As soon as you reach the beach, you can start looking for the rocks (if they are not covered up). Make sure you visit on a low tide.
TYPE: – Fossils are found in rocks and boulders along the beach. Most of these can be seen at low tide in a channel along the bottom of the beach or around the concrete headland at Chapel Point.

Lincolnshire is not a great place for fossils and most of the best locations are quarries. However, parts of the coastline, especially around Skegness, are some of the most popular tourist areas along the east coast of England. Therefore, we tend to get the most questions about the existence of fossil sites near Skegness and, in spite of the lack of cliffs or foreshore bedrock, fossils can indeed be found, albeit not as frequently as at other locations.
The best time to visit is after scouring tides. If you visit on high tides, the fossiliferous rocks will probably be under water. At Chapel Point, fossils can be found in both the channel referred to above at low tide and also around the concrete structure at the Chapel Point itself. They have come from Holderness, and have been moved by the process of long shore drift.
The fossils are erratics. In other words, they do not come from the actual deposits that they are found in. They were brought down during the last ice age, dragged from the north and trapped in giant ice sheets, to be dumped along the Holderness coastline.
You can find almost anything from the Jurassic and Cretaceous rocks of Yorkshire, and also a number of Carboniferous rocks. Fossils include ammonites, belemnites, echinoids, corals and bivalves. While this makes it more exciting, you can never properly date these fossils, as it is impossible to tell exactly from which bed they are from.

There are no cliffs or bedrock at Chapel Point. Rather, rocks have been washed down from along the Holderness coastline (from the Boulder Clay, which was deposited as the glaciers retreated at the end of the last ice age) and have been moved down the coast by the process of long shore drift. They tend to get dumped along certain parts of the Lincolnshire Coastline and Chapel Point is one of those places. Rocks of Carboniferous, Jurassic and Cretaceous age can be seen at low tide along the foreshore and can contain a variety of fossils.

Common sense when collecting at all locations should always be used. The beach at Chapel Point is an ideal place for children. It is extremely hard to get cut off by the tide and there are no cliffs to worry about.

A good eye is all you need, but a hammer and safety goggles will come in handy for splitting open any large boulders you find.