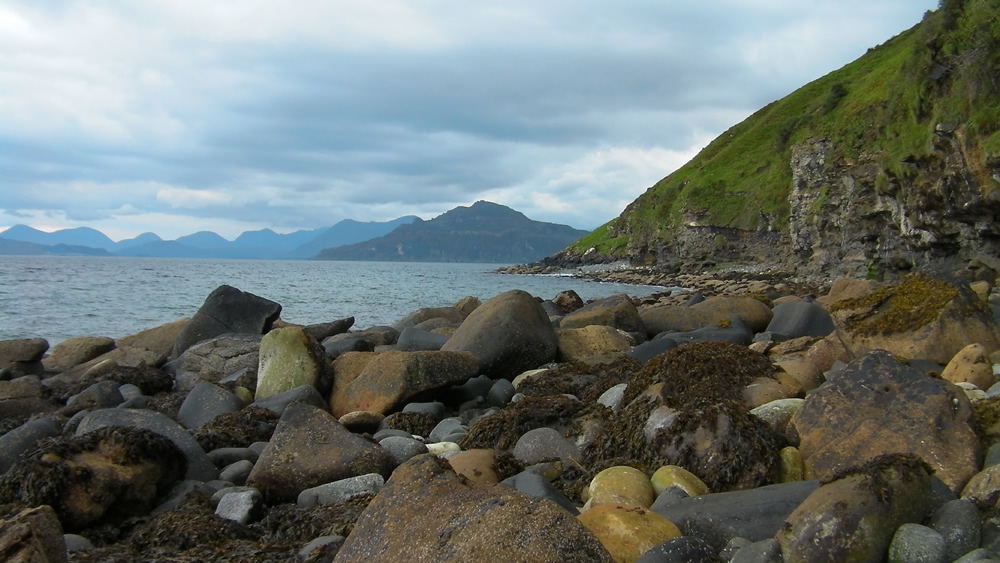 ♦ Take the A855 to Uig from Portree. From the end of the Storr lochs (Loch Leathan and Loch Fada), take the small road to the left at the bus stop. ♦ Follow this over the dam and on as far as the car park at the powerhouse.
♦ Either take the path down to the beach or follow the sheep trail south up and over the top. Then, follow the fence at the top of the tree line.
♦ If you take the upper path, once past the fence, descend carefully towards Holm Island. This avoids Bearreraig, saving you precious time. Note also there are two different ‘Prince Charlie’s Caves’ on Skye.
♦ Ref: NG 51780 48309

FIND FREQUENCY: ♦♦♦♦♦ – There are lots of fossils to be found all the way along the shoreline.
CHILDREN: ♦ – This is a long walk over a very rough boulder-strewn shoreline. Therefore, it is not for the young or unfit.
ACCESS: ♦♦ – Prince Charlie’s Cave is awkwardly located, about 5.5km from the car park at Bearreraig and the same distance from Portree. And there are very few fossil bearing areas from Portree to the cave. There are also several caves, only one being Charlie’s, but there is no need to go as far as the cave if you are tired or feel that the tide may be too far in. The area between Holm and the first two caves will provide more than enough material to look at. The best approach is from the free car park at Bearreraig.
TYPE: – The beauty of this walk is that it takes in the Middle Jurassic stages of Bearreraig and Holm Island, and then changes to the Lower Jurassic stages, including several ammonite zones. And there are lots of loose rocks stuffed with fossils all along the walk.

This is a SSSI and should be respected. Recent damage to the foreshore in this area has put a spotlight on activities in the area, so only take a few specimens home and restrict your efforts to the smaller rocks. There are plenty.

It would be easy to be delayed at Bearreraig while walking among the many fossiliferous rocks from the Bajocian stage and, should you feel the need to stop and explore, then the trip to the far side of Holm could be postponed for another day. Unfortunately, there is not enough time to cover it all. Note that beyond Holm Island, the Toarcian and Pleinsbachian stages can be found and the variety of fossil species change.

When you reach the first cave, which has two entrances close to one and other, you will see signs of the huge pecten bivalves from Pleinsbachian sediments. Evidence of ammonite zones like the Tenucostatum zone, Spinatum zone, Margaritatus zone and Falciferum zone begins to appear in the loose rocks, and a good variety of bivalves and a few brachiopods can be found here. This is a place demanding effort and organising, but the rewards will be variety and the potential for finding rare ammonites. When you reach the shore between next two overhangs, there is no need to proceed to Charlie’s Cave, as the fossils begin to thin out.

The Prince Charles’ Cave site is remote and poorly documented. Through

a combination of relative inaccessibility and poor exposure of the Toarcian shales the amount of data available about this area is very limited.

The succession at the site includes a virtually complete uppermost Pliensbachian to Bajocian (Jurassic) sequence of the Hebrides Basin and presents several differences from other correlative Hebridean successions. In particular the Portree Shale Formation is thicker and more complete here than elsewhere, and this site accordingly is proposed as the type section for the formation.

Avoid the wet slippery lower shoreline, if possible. Take your time to avoid twisted ankles. However, there are a lot of fossils here, but, to cover it all and to safely negotiate two tidal corners; this walk is best done on the lowest tides on a full moon. You must allow time for the return and passing of these two tight spots. It is a very long wait for the next low tide, by which time it may be dark and dangerous.

A small mallet and a cold chisel should suffice. Make sure you keep the weight to a minimum and take lots of refreshments. A torch is essential, in case you end up returning in the dark. Note also that mobile phone signals are not available here.