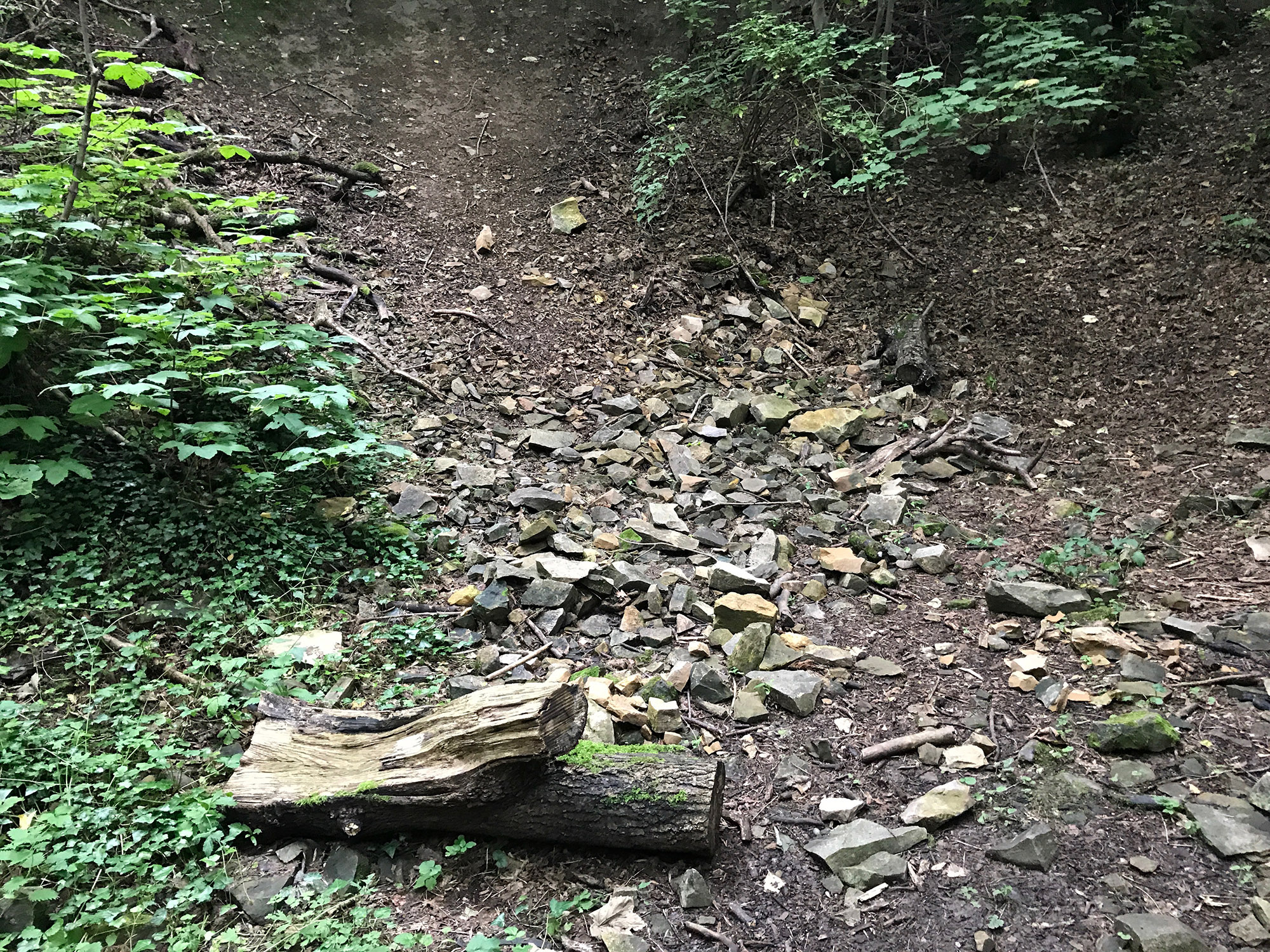 This is a disused Carboniferous limestone quarry, within a small wood. It is very rich in fossils. Studies indicate important changes in the palaeo-environments of the deposits and in the varied macrofossil assemblages from the surrounding Carboniferous sediments, which are of similar age. Due to the importance of the site, keep collecting to a minimum.

♦ Take the A1 and turn into Haddington at the roundabout.
♦ From the crossroads and traffic lights in the northeast of the town, take the A6093 to Pencaitland.
♦ From the garage in the village of Pencaitland, turn left into the B6355. Follow this road to the village of East Saltoun. Park here and walk the end of the village, turning left at the end of the wood and keep going until you reach a gate near to the southeast corner of the wood. It is now only about 180m to gate of the quarry.
♦ Ref: 55.90216°N, 2.83718°W

FIND FREQUENCY: ♦♦♦♦♦ – Fossils are common throughout the quarry and much of the limestone marl has a good cleavage. In fact, fossils can be found in several horizons.
CHILDREN: ♦♦♦♦ – There are no shops or toilets in village. However, this location is child-friendly, as long as they stay away from the face of the quarry.
ACCESS: ♦♦♦♦♦ – Access is easy, as there is a gate and entrance leading to a path through the wood. Note that parking is easiest in the village of East Saltoun. A short walk alongside a very quiet country road leads to the gate. Although there is an entrance to the wood on the other side, this is on a busy farmers lane with no parking, so should be avoided.
TYPE: – Fossils can be found in the many small spoil heaps, but the quarry face must not be touched. The piles of broken limestone heaped at the foot of the face are rich in fossils, but note that this is an important site that is currently being researched. However, the wood is used by the public and limited fossil collection should not need permission.

The disused limestone quarry at East Saltoun contains an unusually rich macrofossil fauna. Fossils can be found throughout the wood in spoil heaps close to the quarry face. As well as molluscs, nautiloids, trilobites, gastropods and sponges, a shark fin spine and scales, and two species of sharks teeth have also been found, and the official faunal list is ever-growing.

The strata are of Blackhall Limestone of the Lower Limestone Formation, from the Brigantian substage of the Dinantian (Lower Carboniferous), which is about 326-331 Mya.

The Blackhall Limestone is pale to dark grey, crinoidal, bioclastic, earthy to hard limestone, interpreted to be of marine origin, with thicker occurrences comprising calcareous mudstone and lime mudstone beds, thinly bedded above and massive below.

The accessible strata are approx 80m in length and 5.5m in height. The face of the quarry runs in a north-south direction and has an approximate dip of 5‎°.

The top horizon consists of a hard grey ochre intrusion of amorphous, argillaceous limestone, which has no apparent cleavage horizons. This overlies approximately one meter of hard crystalline limestone marl. Below this is four meters of softer limestone marl. All three rock types are found in the spoil heaps.

Studies have shown that this succession was laid down a shallow marine lagoon, which was protected from the elements by a crinoidal reef, enabling nursery conditions for the juveniles of many species. This reef was breached at various intervals, leading to turbid disruption to the ecosystem.

This is a child friendly site, but ensure that they stay away from the quarry face, as well as the top of the high spoil heaps. Collecting from these parts of the quarry is not be necessary, due to the richness of the site.

A small geology hammer, a splitting chisel and safety glasses are all that is required. Mobile phones work fine here.