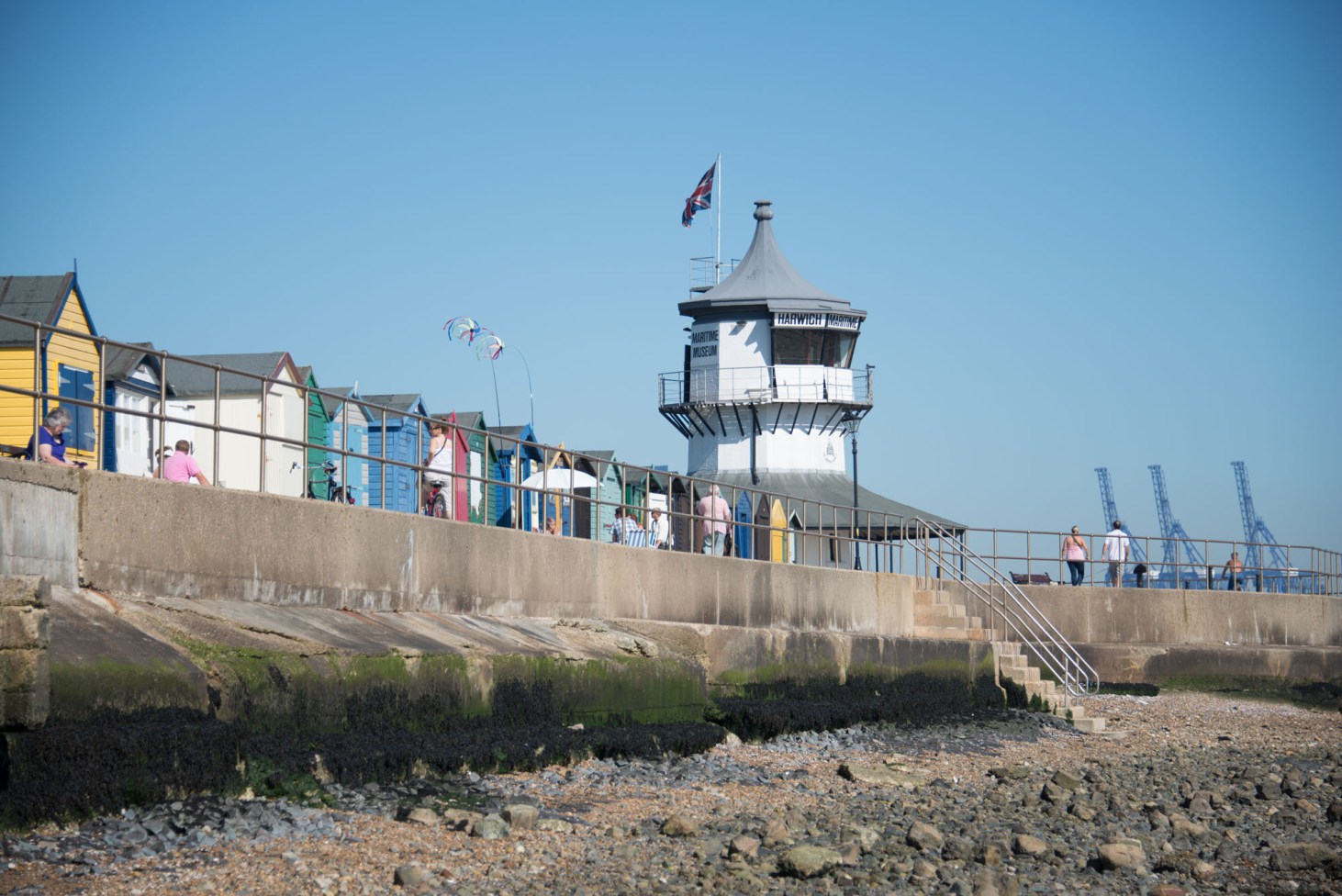 What looks like a flat beach behind a concrete seawall actually yields plenty of shark and fish teeth, plant remains and much more. People have been collecting here for years. However, success at this location is subject to beach conditions.

♦ Follow the A120 into Harwich and then take the B1352 to Dovercourt (to the southeast of Harwich). The collecting area is found just to the south of this part of Harwich and is easily recognised by the two lighthouses.
♦ Park along Harbour Crescent and then walk to the lower of the two lighthouses. If you need toilets, these can be found near the taller lighthouse, close to the railway station. The collecting area starts at the smaller lighthouse, to the south of the worn sea groyne.
♦ Ref: 51.93228°N, 1.27671°E

FIND FREQUENCY: ♦♦♦♦ – Harwich can at times be very productive, but much depends on the beach and tidal conditions. From time to time, the estuary of the River Stour is dredged to ensure the large container vessels can access the ports, but in recent years dredging has not been carried out resulting in fewer fossils being found.
CHILDREN: ♦♦♦♦ – This location is ideal for children. However, be aware of sharp metal objects along this beach and also deep mud. Do not venture out too far.
ACCESS: ♦♦♦ – Harwich is easy to find with free parking, toilets and food. Right next to the site is a fantastic children’s play area, a green, open space for ball games and a cafe, which does very good cups of tea.
TYPE: – This is a foreshore location and is a ‘hands and knees job’. If you crawl along the beach, you should be able to find fossils among the shingle. It is best visited on a warm, dry day.

Fossils from Harwich have been noted for about 300 years. Several nautiloids, large turtles and fossil mammals were recorded in 1796. Recent finds include many different types of fish, reptiles (including turtles), crocodiles, bird bones and occasional mammals.
The most common finds are the highly polished sharks’ teeth and ray palate fragments from the London Clay, with whale bones and shell fragments derived from the Red Crag of the Pliocene. Pine cones, (Platycarya richardsoni) have also been found from the London Clay.

To find fossils at Harwich, you need to collect on a low or falling tide. Collecting is best further out from the promenade. In addition, fossils often get trapped around the large areas of shingle. However, sometimes the beach can be covered with sand and so collecting is poor. The best area is the beach around the shorter of the two lighthouses, and you will need to get on your hands and knees to find the fossils.

The Harwich Formation is marked by patches of silty clay with blocks of sandstone and beds of black pebbles. The latter beds are normally only exposed during low spring tides. The same bed contains attractive veins of calcite and the volcanic ash but tends to yield few fossils. The veins of green banded calcite (calcium carbonate) which can be cut and polished and is one of the few decorative stones native to Essex.

Between the two exposures, there is a fault in which the London Clay (which is from Division A1), has cut through the Harwich Formation. The foreshore is of prime importance for London Clay fossils, particularly for fossil fruits and seeds from the Eocene rainforest. Also found are fossil sharks’ teeth amongst the beach shingle.

Fossils come from both the London Clay (Eocene ~50 Mya) faulted at the Southern end, and from the dredging of London Clay deposits from the riverbed. Material can be dumped on the beach or stirred up after dredging the river. This used to be a location that was highly rich in fossils, but since dredging has stopped, the number of fossils has dramatically decreased and the beach has become more silted up.

Common sense when collecting at all locations should be used and prior knowledge of tide times is essential, but, it is virtually impossible to get cut off by the tide. Sometimes, pieces of metal junk can be seen sticking up from the beach, so one should take care, as these can be quite sharp. However, generally, Harwich is ideal for children to collect fossils.

Harwich is a foreshore location, where most fossils are collected by crawling along the beach on your hands and knees. However, remember to take something to put your finds in, such as a small plastic container or specimen bags.