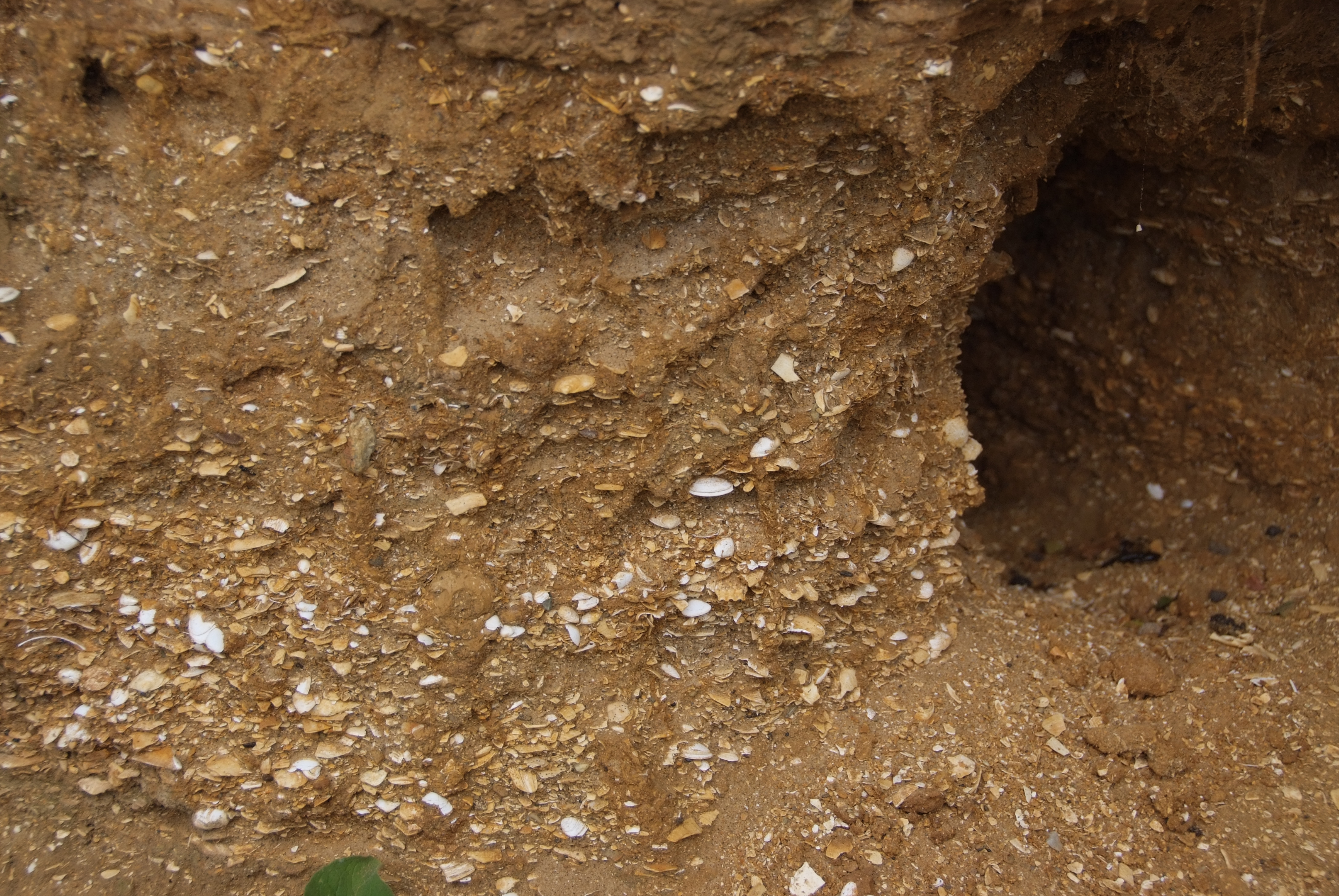 This is the only place where the Norwich Crag can be seen deposited on top of the Red Crag. These Pliocene crags are rich in bivalves and foraminifera, but the shell beds are dominated by just one shell. Due to its geological importance, this site is an SSSI, but bivalves can be easily collected from the scree slopes without the need for any tools.

♦ From Chillesford, follow the B1084 to the west. On your left hand side, you will see Church Farm, and on the right hand side of the road, the church.
♦ Just after the church is a public bridleway, you can drive down this track and park right next to the pit, which is situated behind the church to the west of Chillesford. Alternatively, park at the church.
♦ Once in the pit, the back of the pit contains the best exposures.
♦ Ref: 52.117623, 1.479340

FIND FREQUENCY: ♦♦♦♦ – This location is extremely rich in molluscs and foraminifera, and the shell beds are tightly compacted and only a few metres thick. Although you will definitely find plenty of shells in the scree slopes, the shell beds are dominated by the bivalve, Stifula sp.
CHILDREN: ♦♦ – This location is suitable for older children, but due to snakes (adders) sometimes being present in the pit, they should be supervised at all times. In addition, if you are concerned about the snakes, wear tall boots with trousers.
ACCESS: ♦♦♦♦ – The pit is easy to find and right next to Chillesford Church. You can park at the entrance or at the church, and it is only a few metres away. Sometimes during the summer, the pit floor can be a little overgrown. We advise that you wear long trousers and boots due to a small number of snakes possibly being present.
TYPE: – Chillesford Church Pit is a classic geological site. It is fairly overgrown, but still has a good clean section for study, and also scree slopes from which you can collect fossil shells.

Fossil bivalves can be collected from the Chillesford Crag, which is a sub-division of the Norwich Crag. The Red Crag here is obscured by talus and scree, but there are still around two metres of exposed clean Chillesford Crag shell beds on view. Since wind and rain play a large part in weathering here, the shells tend to drop out and add to the scree. Despite the SSSI restriction on digging within the bedrock facies, bivalves can easily be found in these slopes.

The only problem is the Chillesford Crag here is dominated by one shell – Stifula sp. Expect to find vast numbers of these, and a few other species such as Macomia sp, and bryozoans. Other bivalves can be found, but are far less common and much smaller. For those interested in microfossils, the crag is also rich in foraminifera. Small samples can be scooped up from the scree slopes for study at home.

This important site is the only location known where the Norwich Crag Formation (Chillesford Crag and Chillesford Clay, which is about 1.9myrs old) lies directly on top of the Red Crag. The formation is marine, with the clay members being estuarine

Even in boreholes, there is no other place that has been found where the two Pliocene crags occur together. The pollen spectra of the Chillesford Crag indicate temperate conditions.

The Chillesford Crag has been correlated with the Bramertonian Stage of the early Pleistocene.

Common sense should always be used when visiting any site. The cliff faces here are fairly stable, since this pit is now quite old and overgrown in many areas. However, care should be taken as the pit can contain snakes and wasp nests within the crag walls.

Due to SSSI restrictions at this site, digging tools are not allowed to be used on the bedrock. However, fossil shells can easily be collected from the scree. For the scree slopes, a small knife or trowel will come in very handy. We advise wearing long trousers and boots due to a small number of snakes being present.

This site is an SSSI. This means you can visit the site, but hammering the bedrock is not permitted. For full information about the reasons for the status of the site and restrictions please download the PDF from Natural England – SSSI Information – Chillisford Church Pit