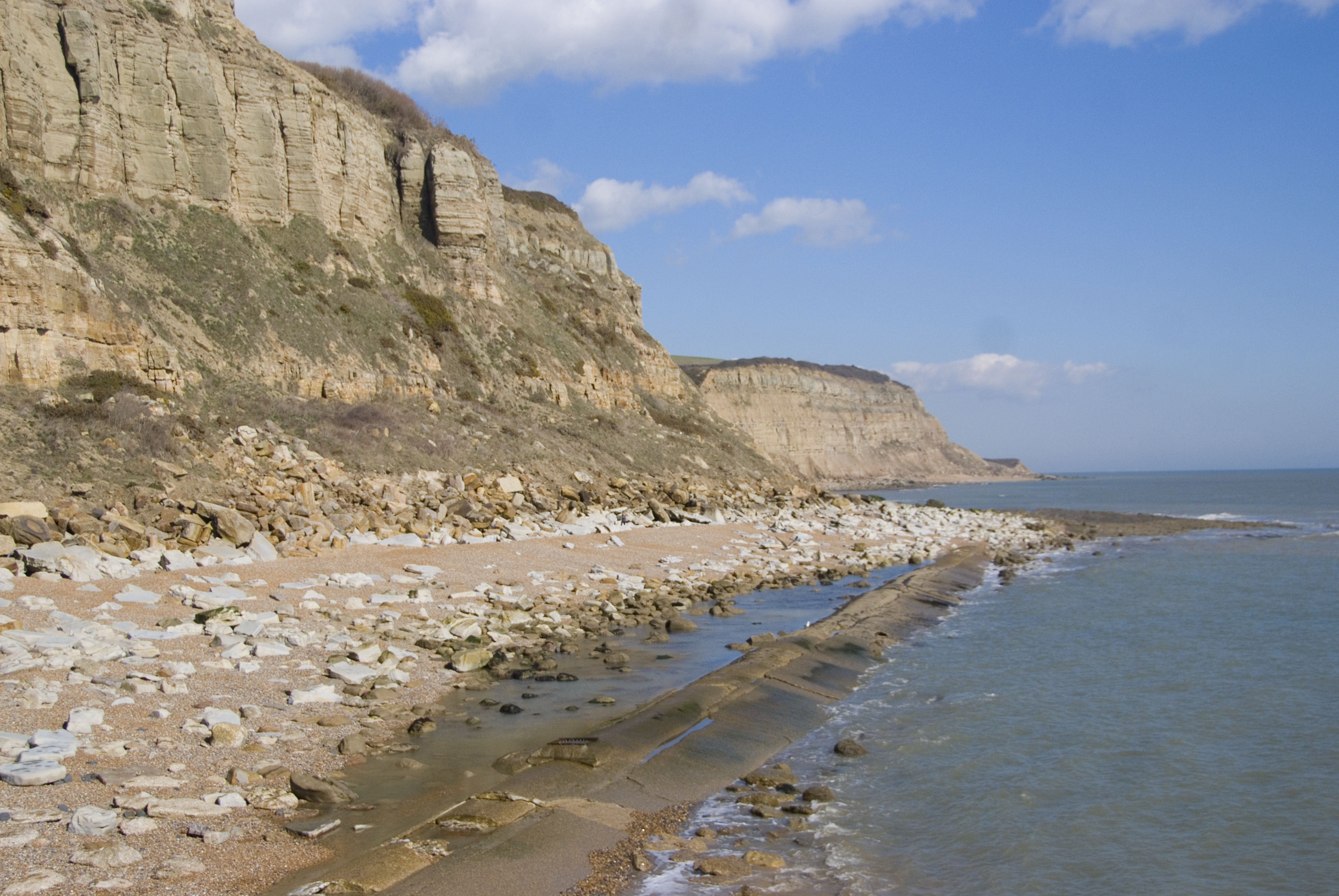 Hastings is one of the only places outside of the Isle of Wight where dinosaur bones can be found and this popular and important site has yielded some important finds over the years. Fish, shark, plant, reptile remains, bivalves and gastropods can also be collected. Keep a look out for dinosaur footprints.

♦ The cliffs at Hastings are best accessed from the large car park at ‘Rock-A-Nore’. Simply follow the Hastings seafront eastwards and head towards the ‘Old Town’. This is also the road to the well-known fishing tackle shops.
♦ Nearby, there are toilets and several food outlets/shops. You will pass a sea life centre and a fisherman’s museum.
♦ Continue to the end of the large car park, where you will have to pay to park. Access to the beach appears to be blocked off with a bar put across what once was a footpath to the beach. This is for safety reasons, since the old concrete ramp and steps down have become badly eroded.
♦ You can still access the beach safely by climbing over the bar and descending some concrete blocks. However, as this is no longer an official access point, this is entirely at your own risk.
♦ Ref: TQ 83330 09699 – 50.85773°N, 0.60345°E

FIND FREQUENCY: ♦♦♦♦ – Hastings has yielded excellent fish specimens and dinosaur fragments, but is also over collected due to its popularity. The best time to collect is after the winter storms and scouring conditions.
CHILDREN: ♦♦ – Access to the beach can be difficult for younger children now that the old official way down is badly eroded. The foreshore is also very rocky. Keep away from the base of the cliffs.
ACCESS: ♦♦♦ – Access to the foreshore at Hastings is easy to find, being right next to a very large car park, where there are toilets and several food outlets/shops. You don’t have to walk very far, but, be warned that the beach can be very rocky and access can be difficult, due to the heavily eroded ramp and steps.
TYPE: – Fossils can be found in the chalk of the foreshore and also within boulders. However, the cliffs should not be hammered into.

There is a wide variety of fossils to be found at Hastings, from dinosaur bones (mostly fragments) to complete fish. Small teeth are quite common, especially sharks’ teeth, such as Hybodus. The most common fish is Scheenstia, the scales of which can be found in the rocks and clay.

Keep an eye open for dinosaur footprints, the most common being from Iguanodon. These are quite hard to find, but look for three indentations, where it looks as if something has pressed into the soft rock. In addition, you can find crocodile bones and teeth (other reptile remains have also been found here), a number of different bivalves and gastropods, and a few varieties of plants (especially Equisetites, which is a horsetail). Success at Hastings is often subject to beach conditions.

The ideal time to visit is after exceptional high tides and storms. A good scour will clear away the shingle and allow you to search the foreshore for bones, shells, teeth and plants. Fossils can generally be found anywhere along the foreshore. You should search around the areas of clay and examine the rocks, because most of the bones and fish remains are found in these hard blocks.

Many small teeth can be collected from the clay, especially at Rock-A-Nore itself. Search in the clay and mud of the scree slopes, especially after heavy rain. In these conditions, fossils are washed out and often just waiting to be picked up.

The high sandstone cliffs at Rock-A-Nore are part of the Upper Ashdown Formation and are overlain by shales and sandstones from the Wadhurst Clay. These are from the Wealden Group from the Valanginian Age of the Lower Cretaceous. The Ashdown formation is split into two parts, with the majority of the cliff at Rock-A-Nore made up of the Ashdown Sandstone, but, as you walk towards Ecclesbourne Glen (where there is a large waterfall), the Fairlight Clay is exposed in the lower part of the cliff and foreshore.

As always, common sense when collecting should be used and you should check tide times before going, as the sea always reaches the base of the cliff at high tide. Note that many people each year are cut off by the tide. The other important thing to note is the danger of falling debris from the high cliffs. Stay away from the foot of the cliff and, if you are breaking rocks, do so well away from the cliff, as hammer vibrations can cause debris to fall. Hard hats should be worn.

Many fossils can be found on the foreshore and in the scree slopes, but the best fossils are normally found in the hard rocks on the beach. For this reason, you will need to bring a hammer and chisel to extract them.