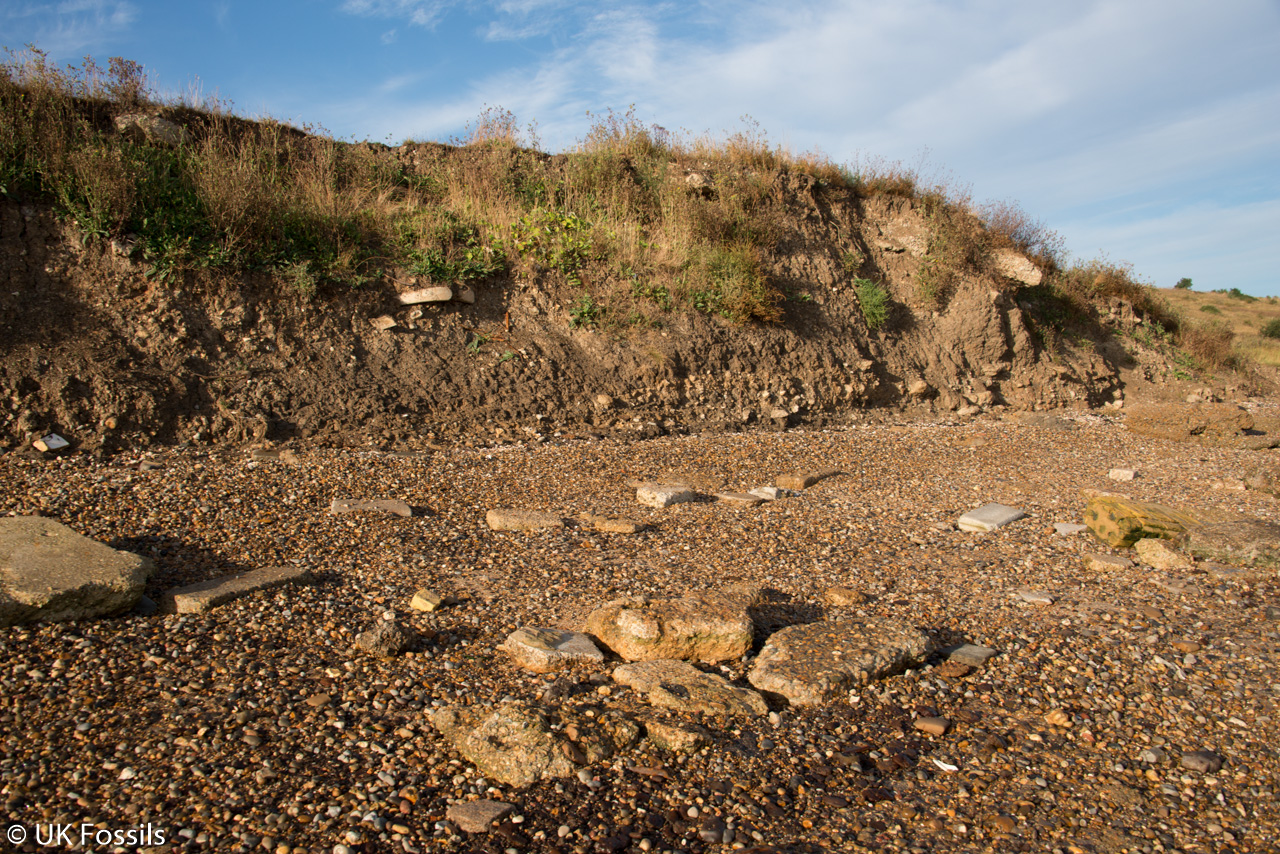 Minster on the Isle of Sheppey is another excellent site for collecting London Clay fossils and often has different fossils from those at Warden Point. Plant remains (especially seeds and fruit) are particularly common at this end, with the smaller fossils amongst areas of pyrite being the easiest to collect. However, a longer walk is required to get to the fossiliferous areas, compared with Warden Point.

♦ Minster is located on the northern side of the Isle of Sheppey. The island is accessed from the A249 from the M2. Once over the main bridge to Sheppey, take a left turn at the first roundabout and stay on the A249.
♦At the second roundabout, take the A250 towards Minster. At the ‘Halfway houses’ junction, go straight over onto the B2008 towards Minster and follow it through the town centre. Then head to the northern part of the town towards the promenade (most roads will lead here).
♦There are two car parks along the promenade. Park at the one towards the southeast.
A walkway will take you down to the promenade seawall. Follow this all the way southeast until you reach the start of the cliffs.
♦ Ref: 51.40953°N, 0.90807°E

FIND FREQUENCY: ♦♦♦♦♦ – The coastline between Minster and Warden Point is extremely rich in fossils, with a very huge range of species to be found. Several excellent publications have also been written on London Clay fossils, with most of the documented finds occurring along this part of the coastline. Fossils can be found all year round and finding good specimens is not dependent on beach or tidal conditions.
CHILDREN: ♦♦♦♦♦ – While Minster is suitable for children, they need to be supervised at all times. The extensive foreshore can be very sticky and tides nearly always reach the base of the cliffs. There are also a number of sharp objects from a large number of shipwrecks along the beach, which could be dangerous for younger children.
ACCESS: ♦♦♦♦♦ – The site at Minster is very easy to access, but does have a longer walk than the Warden Point end of the section. However, the longest part of the walk is along the promenade, so most of it is easy going.
TYPE: – Although Minster has both cliffs and an extensive foreshore, it is unlikely you will find many fossils in situ. Most of the fossils have been washed out by the sea, like a giant sieve, and can be found in nodules and in the areas of shingle exposed along the foreshore clay platforms. Note that this site is also an SSSI, so digging in the cliff is not permitted at any times. In addition, the cliffs here tend to be covered in vegetation and badly slipped.

Minster is an ideal location for families, but those wishing to visit should be aware that this part of the coastline (along the northern side of the Isle of Sheppey) can be dangerous due to the tides, deep mud and cliff falls. Minster tends to be safer than Warden Point, due to the slumped vegetated cliffs with less areas of extremely sticky mud. However, it can still be a dangerous place to collect. Please read our safety notes (below) and be aware of these dangers.

The best way to find fossils is to get on one’s hands and knees, and search in the shingle exposed along the upper part of the beach. There are far more areas of shingle and pyrites at Minster to look through than at Warden Point, with smaller fossils being more common here than at any other London Clay location. Generally, these can be found all year round.

Besides searching the shingle areas, larger fossils can generally be found either along the upper part of the beach after the sea has washed the clay cliffs or along the extensive foreshore. The lower foreshore does not normally have any areas of shingle to beach crawl. Instead, fossils here are mostly found in phosphatic nodules, which run in bands along the foreshore. The best specimens are found in these nodules, but are not as common as the smaller fossils found by beach crawling higher up the beach.

Of particular interest at this location is the large number of fossil fruit, seeds and other plant remains that can be found, especially Nipa fruit, which are quite common and often found complete. Indeed, there is always something for everyone to find if you are new to Sheppey, including small fossil fish teeth, small shells (especially gastropods), fossil worm tubes, fish vertebrae and, of course, sharks’ teeth. Larger fossils, although less common than at the Warden Point end of the section, can be found, including snake bones, shark vertebrae, crabs, crocodile, turtle and much, much more. In addition, there are several excellent publications, which show the extensive number and types of fossils that can be found and another excellent resource is the website, Sheppey Fossils (www.sheppeyfossils.com).

Common sense should always be used at all locations and prior knowledge of tide times is essential. Minster tends to be a safer location to collect from than Warden Point, since the cliffs are badly slumped and often covered in vegetation. However, it is still just as easy to get cut off by the tide here as at Warden Point, since the tide often reaches the base of the cliffs. In addition, the cliff landslips are very dangerous and should never be climbed, as it is possible to become stuck in the deep clay. Care must also be taken on the foreshore, as this can be very muddy and it is easy to become stuck (although this is less common than at the Warden Point end). Along the coastline, there are also a lot of sharp metal objects and sharp spikes are present at Minster from old shipwrecks. However, if you keep away from the cliff face, double check tide times and keep an eye on what you are stepping on, then Minster can be a safe place to collect.

Fossils are found on the foreshore, so it is best to take a trowel and a knife. In fact, a long handled trowel comes in very useful for picking up nodules and fossils, reducing the need to constantly bend down to inspect objects.