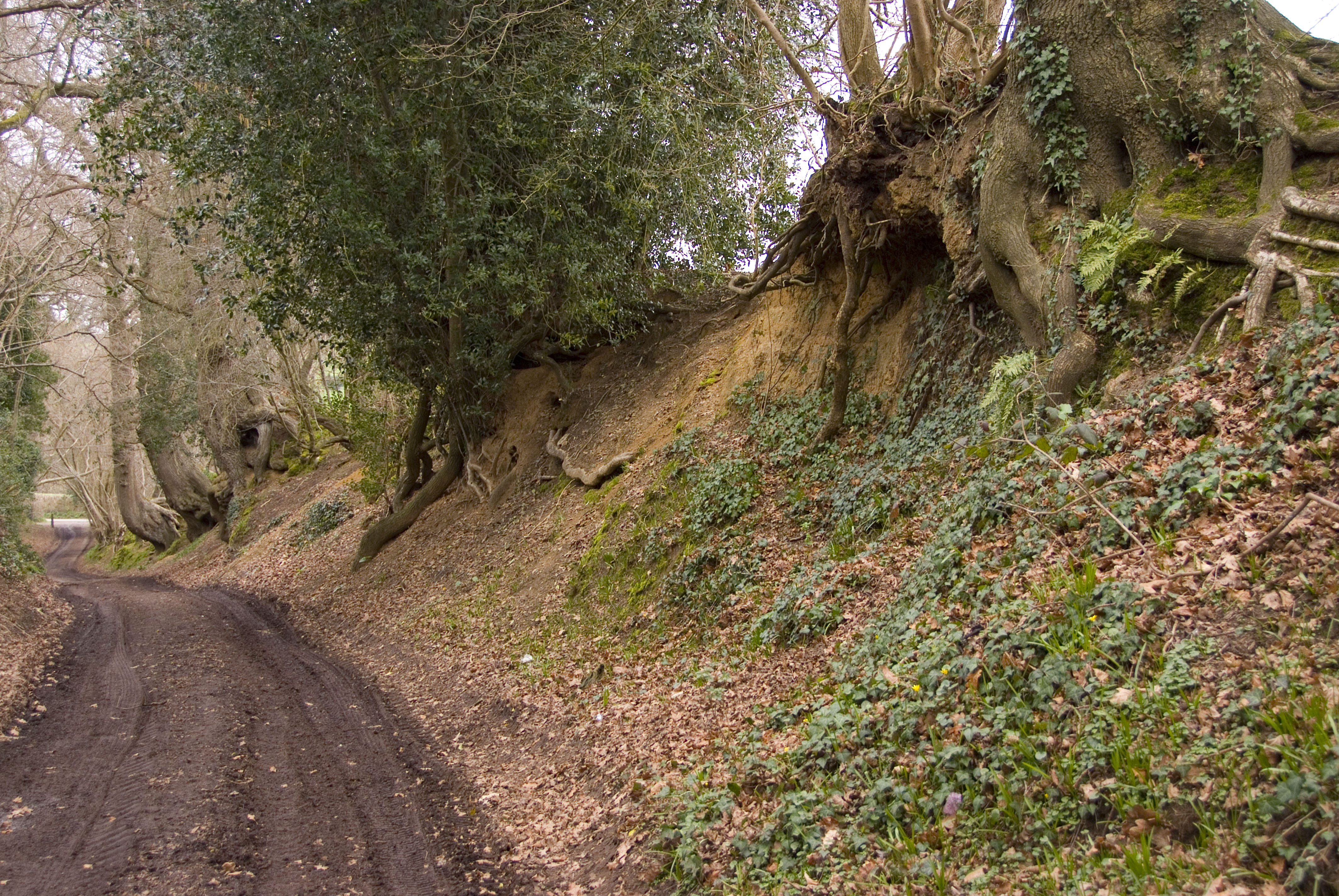 The Farm Cutting site is a road cutting in Pulborough that exposes the Sandgate Formation. Hard ironstones within the layer yield a variety of well-preserved bivalves. Although overgrown, the ironstones are highly fossiliferous. Therefore, once the bed is located, plenty of specimens should be found.

♦ Park Lane is an unmarked road, found just to the west of Pulborough. From the A29, there is a minor road heading west (Coombelands Lane), which passes a church and then crosses a railway line.
♦ Beyond the railway, you will pass over a public footpath on both the left and right hand side of the road.
♦ Continue on until you will see a narrow road heading up hill on the left. This is also a public footpath. This is Park Lane. Park on the grass and walk up the road. It is a short lane that leads to a farm.
♦ The fossiliferous exposures are found in the banks of the cutting. Park Farm is found just east of the Pulborough Park Plantation and east of the railway station at Pulborough.
♦ Ref: 50.960159, -0.521239 – TQ 0395 1890

FIND FREQUENCY: ♦♦♦ – The main fossiliferous bed at this road cutting is now fairly overgrown, but it can easily be located under, and either side of, a large tree. The formation is quite sandy, with the relevant layer being a hard ironstone containing bivalves. Once located, you should find plenty of specimens.
CHILDREN: ♦♦ – Although the road is rarely used, this is not really a location suitable for children. Rather, it is more for enthusiasts looking to collect specimens from the Sandgate Formation.
ACCESS: ♦♦♦ – It is quite easy to find, with limited parking for one car, not too far away at the side of the road. It is best found using an OS 1:50,000 map or GPS device to find the lane, as it is not signposted. Without a map or GPS, it is difficult to find.
TYPE: – Fossils at Park Lane are found in the banks of a road cutting. It is now somewhat overgrown, although there is still plenty to be found. Please only take a few specimens.

As you walk up Park Lane, you will notice a sandy formation in the banks. This contains outcrops of hard ironstones in pockets. One such pocket is quite easy to find, since it is on either side of a large tree on the left hand side of the road. These contain the ironstones and splitting them will reveal bivalves. These include Gervillella, Nucula, Arca, Toucasia, Parmicorbula and Resatrix. They are often preserved as moulds, but complete specimens can also be found. They also tend to be black on brown rock, so they really stand out when exposed and, if moulds are found, the inside of the shell is shown in great detail. This makes them quite unique. Indeed, the Toucasia bivalve is quite rare in the UK, being a Tethyan immigrant and indicating warm waters, but here it can be found fairly commonly.

Essentially, the Sandgate Formation of the Upper Aptian stage, can be divided into the upper two members, namely the Pulborough Sandrock Member and the Marehill Clay Member and which have been traced over a wide area of western Sussex and Hampshire.

The lowest member was generally referred to as ‘loams’ but are now named the Bargate Sandstone Member and Fittleworth Member, comprising highly glauconitic sandy clay and clayey sand, which weather to give a very sticky yellowish brown soil..

At Park Farm Cutting, the road cuts through the Pulborough Sandrock Member. Although completely different in appearance from what is usually thought of as greensand, this is actually part of the Lower Greensand Group.

The site shows the only good exposure of the ‘loams’ from  the Sandgate Formation in the southern Weald. The locality is the best collecting ground for a diverse molluscan fauna which is characteristic of the unit in the immediate area and which allows vital biostratigraphic correlation between the Isle of Wight nutfieldensis Zone sediments and coeval deposits in the Weald.

Common sense when collecting at all locations should be used. This is a road and, although hardly ever used, you need to watch out for vehicles. DO NOT leave rocks lying on the road and make sure you tidy up any loose debris when you have finished.

Fossils at Park Lane are found in the banks of a road cutting. It is now somewhat overgrown, although there is still plenty to be found. Please only take a few specimens.