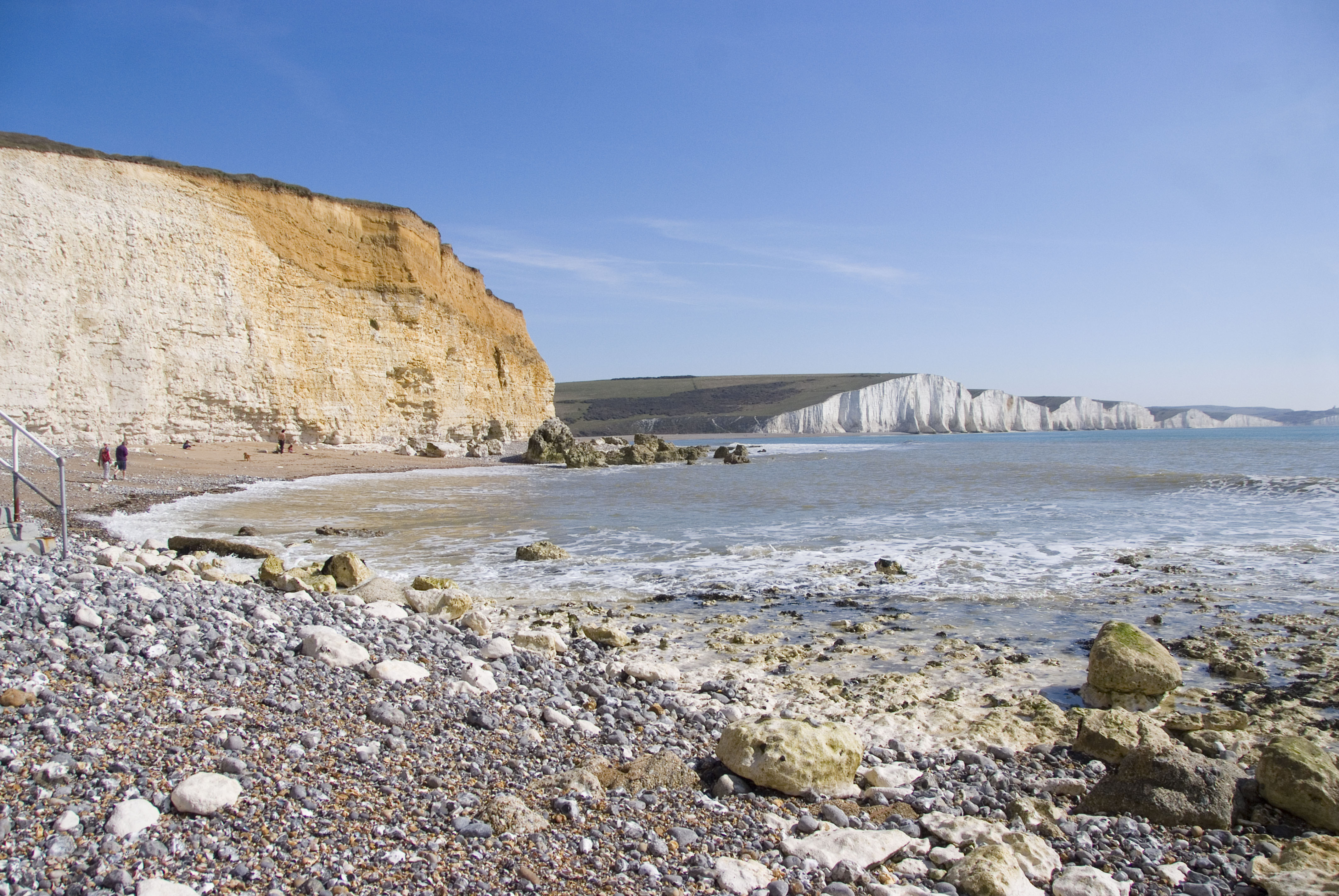 Depending on foreshore conditions, this can be an excellent location for chalk fossils. There is a foreshore platform immediately to the right of the steps, which is extremely rich in echinoids. You can see vast numbers of damaged ones in the rocks of the foreshore, but, if you look harder, you should be able to find some complete specimens.

♦ Go past the Seaford Head golf course, along Chyngton Road and up a narrow lane at the end which takes you to the car park. From the car park, take the central track road down. (the left and right hand road simply loops around to meet the trackway).
♦ Follow and then take the footpath that veers to the right down through the gap. This will then lead to some steps. There are other access points from the car park.
♦ There are numerous boulders on the beach and the foreshore is uneven and slippery. The location is suitable for children but parents should be on hand to supervise.

FIND FREQUENCY: ♦♦♦♦ – The chalk here is very fossiliferous in places. In the cliffs, you can see many echinoid spines, bryozoans and numerous other types of fossil. However, these should not be collected and you should not hammer into the cliff face. Good examples can be found by splitting boulders and searching the foreshore, but patience is needed. The foreshore chalk on the right hand (west) side of the beach when entering from the steps is very rich in echinoids.
CHILDREN: ♦♦♦ – There are numerous boulders on the beach and the foreshore is uneven and slippery. The location is suitable for children, but parents should be on hand to supervise.
ACCESS: ♦♦♦♦ – There is a free car park at the top of the cliff and it is a fairly short walk down to the beach. Once on the beach, walking is easy enough in most areas. However, there are numerous boulders in places and the foreshore can be uneven and slippery.
TYPE: – Fossils can be found in the chalk of the foreshore and also within boulders. However, the cliffs should not be hammered into.

As soon as you enter the beach from the steps, walk towards the right (west), as this is the best area to collect from. There is a large area of wave cut platform to look over in search of echinoids (Echinocorys gravesi and different species of Micraster). These are generally broken or worn, but complete specimens can be found if you break open chalk blocks lying on the foreshore.

All along this coastline is productive. The cliffs have many cidaroid echinoid spines, bryozoans and more weathering out of them. However, all of these can also be found in the chalk blocks, so there is no need to hammer into the cliff face, which is dangerous. With a little bit of patience, you should find a few nice specimens to take home.

There are also some fantastic views of the Seven Sisters themselves and of Cuckmere Haven from here, and this location is much safer than collecting from the more famous Seven Sisters site.

The chalk at Seaford Head belongs to the Upper Chalk, and was deposited during the Coniacian stage of the Late Cretaceous epoch between 89-86 Mya.

The earliest chalk at Seaford belongs to the Lewes Nodular Chalk Formation and dates from 89 Mya. The formation is well exposed on the foreshore and in the lower half of the cliff. Several distinctive marker horizons can be seen, particularly the Hope Gap Sheet Flint which lies immediately above the Hope Gap Hardground; an intermittent ledge protruding from the cliff base. The upper surface of the ledge indicates the top of the Hope Gap Hardground – a conspicuous layer comprised of iron-stained nodular white chalk interspersed with soft, grey chalk.

Immediately above the Hope Gap Hardground (and Sheet Flint) are the Beeding Hardgrounds, also belonging to the Lewes Nodular Chalk Formation.

Common sense when collecting at all locations should always be used and you should check tide times before going. It is possible to become cut off by the tide, so make sure you collect on a retreating tide. The cliffs here are also prone to collapse, so keep a safe distance from them and always wear a hard hat. In some places, weed on the foreshore makes it very slippery. Mobile phone signals are generally non-existent here, so tell someone where you have gone and what time you expect to be back.

A good, sturdy bag and plenty of packing material, as well as a hammer and chisel, are needed at this location. Waterproof boots with a good grip will also come in handy.