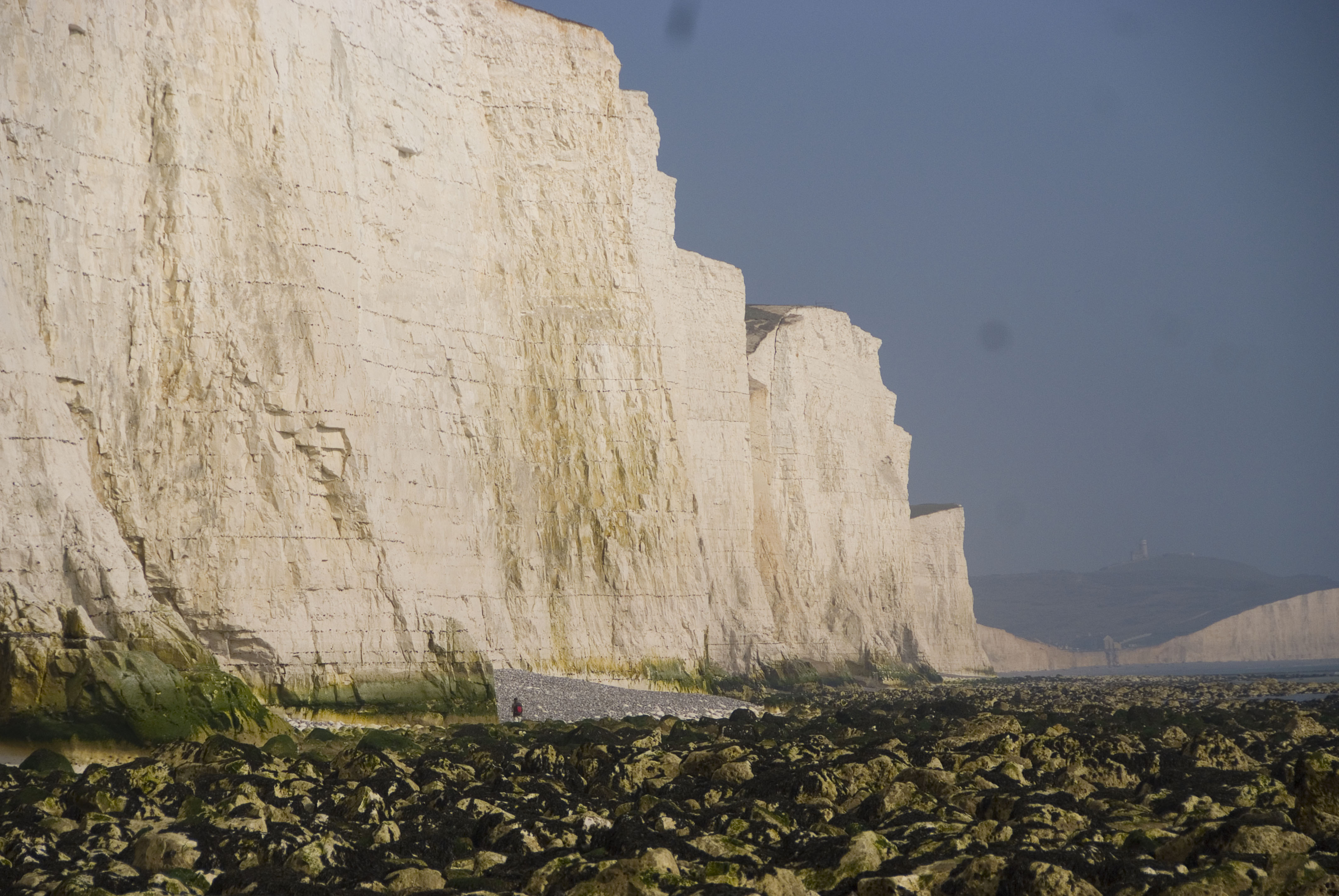 This site is world famous for its highly fossiliferous chalk, which is packed with a wide range of different echinoids, brachiopods, bivalves and crinoids. This is one of the best chalk locations in the UK for its variety of fossils and is recommended to all keen chalk fossil hunters.

♦ This guide concentrates on the main Seven Sisters section, accessed through the Seven Sisters Country Park.
♦ From the A259, park at the Seven Sisters Country Park, which is a large car park, split into main and over-spill parts.
♦ Note that this is a very popular tourist location and can be very busy. As a result, it is often hard to park. If parking in the over-spill car park (where the information centre and toilets are found), take extra care crossing the road, as it can be dangerous with fast moving traffic.
♦ It is a long walk through the park (about one mile). Thankfully, it is quite easy without any hills to climb.
♦ Follow the path to the beach (which is signposted) and, once there, walk left (eastwards) along the foreshore.
♦ Ref: (TV 52056 99489 – 50.775056, 0.155239)

FIND FREQUENCY: ♦♦♦♦ – Although the chalk is highly fossiliferous, the foreshore tends to be fairly green with algae and the very tall cliffs are too dangerous to collect directly from underneath. However, the Seven Sisters is one of the best chalk locations in the UK and is recommended to all keen chalk fossil hunters, but poor beach conditions can mean you come away with nothing.
CHILDREN: ♦♦♦ – The Seven Sisters is suitable for families, but not recommended for small children. Keep away from the base of the cliff at all times.
ACCESS: ♦♦ – It is a long walk down to the cliffs at the Seven Sisters, although you simply follow the long path through the park. This can make access to this location difficult for some, but you can hire bicycles from the visitor centre. Although long, the walk is thankfully over flat land.
TYPE: – Fossils at the Seven Sisters are mostly found simply lying on the foreshore. However, they can also be found in the cliff face and scree slopes, but extreme care should be used when approaching these. We do not recommend you collect fossils from the cliffs and scree.

This is a classic location for chalk collectors. However, you will not always come away with plenty of fossils, as this location is very unpredictable. Sometimes, the foreshore can be covered in algae and, with few fresh rock falls, this can make collecting poor. The high cliffs can make things even harder, as collecting from these is very dangerous and not recommended, especially if there are overhangs. Having said this, the Seven Sisters is still highly recommended to collectors and, with a cleaner foreshore or large cliff falls, it can yield the best chalk fossils of any chalk site. And, even if it doesn’t, the long, lovely walk through the park still makes it worth visiting.

Fossils are mostly found in the scree slopes, cliff falls and from the boulders on the foreshore. Sometimes, fossils can be found loose just waiting to be picked up. Most people visit the first section of the cliff, so walk further (tide permitting) to increase your chances of finding fossils. The most common fossils at the Seven Sisters are echinoids and there are many different species, which fall within four main groups. These are Micrasters, which are the heart-shaped variety; Conulus, which are the small round type; Echinocorys,which are the large oval type; and regular echinoids, which are similar to modern day regular sea urchins. This location is also rich in bivalves and brachiopods, and sponges can additionally be found. You never know what you may find since this site is so rich in fossils.

The chalk at Seven Sisters belongs to the White Chalk Sub-Group (formerly Upper Chalk), and was deposited during the Coniacian and Santonian stages of the Late Cretaceous epoch between 87-84 million years ago Mya. The cliffs, in the main, are made up of the Seaford Chalk Formation with Newhaven Chalk Formation at the top.

The Chalk here contains a huge variety of fossils in a wide range of zones. The Seven Sisters, from west to east, are: Haven Brow, Short Brow, Rough Brow, Brass Brow, Flat Brow, Bailys Hill and Went Hill. More recently due to cliff erosion, an eighth sister has now appeared and this is called Flagstaff Brow. This can be seen between Brass Brow and Flat Brow.

At Birling Gap, the Seaford Chalk Formation can be examined which yields a different variety of fossils from the other Seven Sister cliffs. In the 1996 tour, 5 different species of echinoid were collected along with many brachiopods and bivalves.

Common sense when collecting should always be used and knowledge of tide times is essential. There are two broad dangers apparent along the Seven Sisters coastline. The first is the tide, which needs to be taken note of as it can reach the base of the cliffs. Always allow plenty of time to return. The second is the danger of falling debris from the high cliffs. Stay away from the foot of the cliffs and, if you are knocking out fossils or hitting rocks, do so well away from the cliffs, as hammer vibrations can cause debris to fall. Hard hats should be worn. Finally, be careful of slipping on seaweed on the rocks of the foreshore.

Most fossils at the Seven Sisters can be found on the foreshore or at the base of the cliff from the fallen rocks and scree slopes. You will need a geological hammer and chisel to extract them.