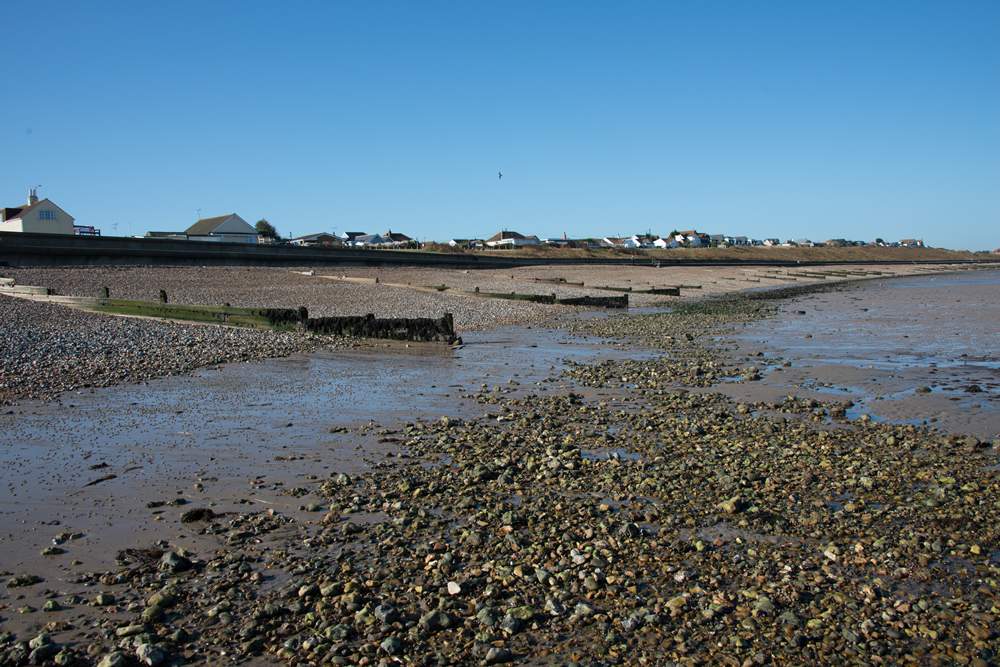 The Studd Hill location is a foreshore exposure, which begins at Hampton Pier and ends at Long Rock (both are marked on OS 1:50,000 maps). In recent years, continuous erosion has been exposing the London Clay more frequently, although fossils are still not as common as they are at the popular neighbouring sites of Tankerton and Herne Bay.

♦ Follow the A299 to Herne Bay and take the Herne Bay exit, following the A2990 left at the roundabout.
♦ At the next roundabout, take a right turn and then go left at the junction. This is the main road to Studd Hill.
♦ Take a right turn heading towards Hampton Pier, marked by a brown sign. After about 350m, you will find a large car park next to a large, children’s play area and a village green, with a block of toilets.
♦ From the car park, head down to the shore. The area to collect from is between Hampton Pier and Long Rock, which is 2km in length.
♦ Ref: 51.36883°N, 1.09424°E

FIND FREQUENCY: ♦♦ – The London Clay at Studd Hill is not as productive as the neighbouring sites of Herne Bay and Tankerton. This is mainly because it is not exposed as often and tends only to be exposed in small patches along the beach.
CHILDREN: ♦♦♦♦ – This is an excellent site for children. It has easy and quick access from the car park, with a very large playground next to the site. There are also toilets and plenty of places to eat and drink, being situated in the popular area of Herne Bay.
ACCESS: ♦♦♦♦♦ – Studd Hill is easy to find, with a large car park and very quick access to the shore. The only downside is that areas of London Clay tend to occur anywhere along 2km of beach, which also extends far out at low tide. For these reasons, it can easily end up being a very long walk. The final 1km towards Tankerton becomes more difficult to collect from, being covered in pebbles
TYPE: – Fossils are mostly collected from areas of sand, having been washed out of the London Clay, which is mostly exposed only in patches. There is very little shingle here, so fossils are easy to spot. At the western end, the foreshore is covered in pebbles and has areas of exposed London Clay.

Fossils can be found loose or within Phosphatic nodules and are mostly found lying on the sandy beach, around and near to patches of London Clay. They are easy to spot, but are sadly not common, unless beach conditions are favourable.

Fossils documented from Studd Hill include several species of shark and fish, trace fossils, three species of lobsters (Homarus morrisi, Hoploparia gemmoides and Linuparus scyllariformis), five species of crab (Campylostome matutiforme, Cyclocorystes pulchellus, Dromilites bucklandi, Portunites incerta and Zanthopsis leachi), as well as bivalves, gastropods and crinoids. Interestingly, one very rare and important species of mammal has been recorded here (Hyracotherium leporinum), which has only been officially documented from one other site at Tankerton.

The cliffs at Studd Hill attain an elevation of 50 feet and exposes London Clay from Division B1. This is rarely seen as an extensive platform but is more commonly found in small patches exposed along the sandy beach.  Generally, fossils are heavily pyritised and consist mostly of fruits and seeds. Wood is common but teeth and vertebrae of fish, nautili and crustacean remains, usually characteristic of the London Clay Formation, are scarce.

Towards the western end, pebbles and flints are exposed in a gravel bed laid down by a Pleistocene river, which forms ‘Long Rock’. Within this bed, bones of mammoths, rhinoceros, bison and deer have been found.

Common sense when collecting at all locations should be used and prior knowledge of tide times is essential. This location is generally safe, although be aware that the sea comes in very quickly. The beach extends some distance out from the shoreline and it is very easy to become cut off by the tide coming in behind and around you. Although very rare, the London Clay can sometimes be exposed more extensively and, when this is the case, it is very easy to become stuck.

You don’t really need any tools to collect here, as most fossils can be picked up loose from the foreshore.