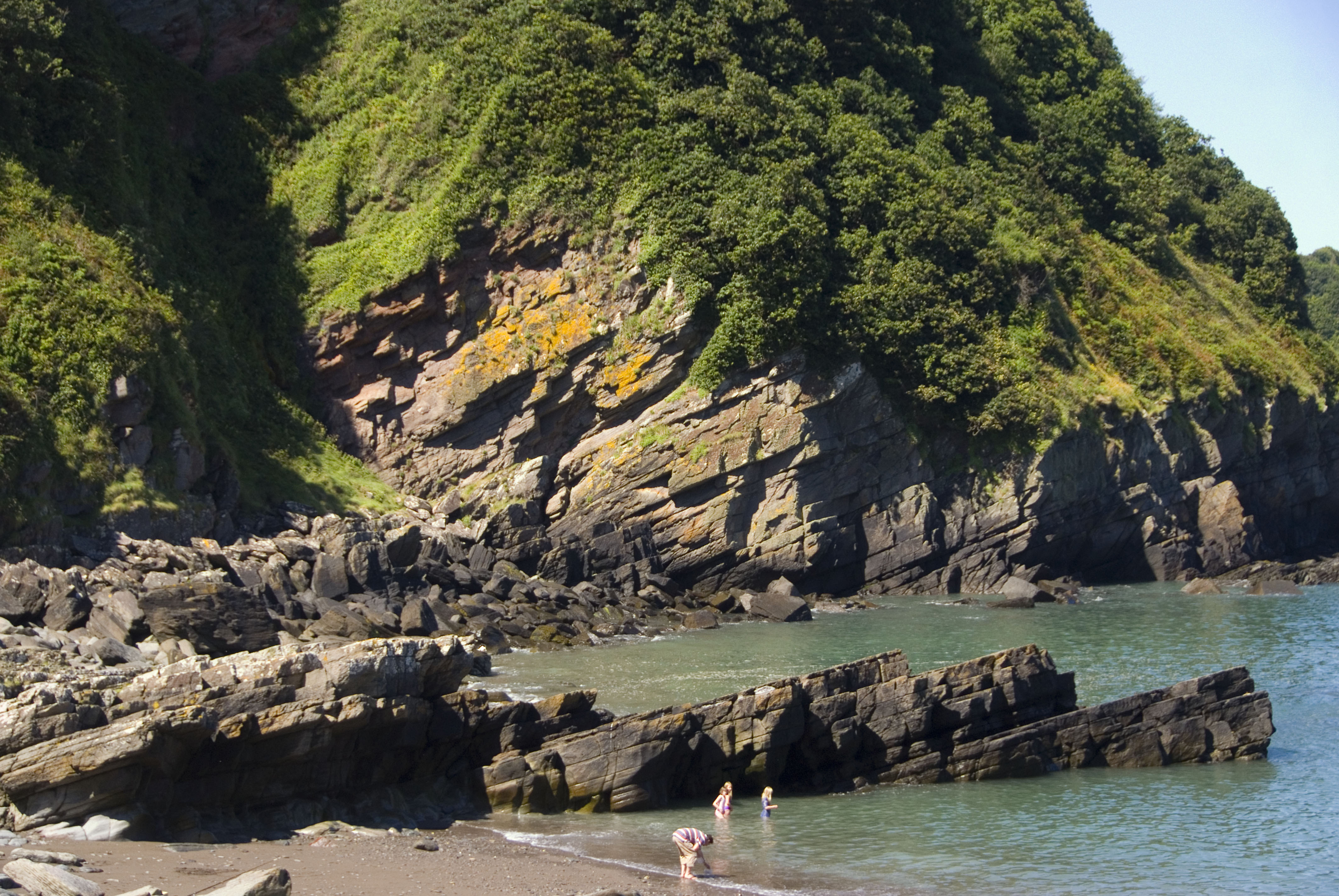 Lee Bay is a coastal location just to the west of the Valley of the Rocks. It features similar, but more fossiliferous rocks than those found at the Valley of the Rocks, but the site is harder to collect from and the cliffs are not easy to access. The sea always reaches the cliffs at the headlands, even at the lowest tide, and the best sections will require some climbing over large rocks.

♦ Head to Lynton from the A39 on the B3234.
♦ Drive through the Valley of the Rocks, which is well signposted and should be easy to find. Drive through the village of Linton and continue along the coastal road. (Note that it is a good idea to do both the Valley of the Rocks and Lee Bay on the same day.)
♦ Continue through the valley until you reach the toll road. Take this and the toll is paid at the end, outside Lee Abbey.
♦ Continue past the Abbey and you will come to the pretty area of Lee Bay. There is a large car park here. From here, walk back to the road and down to Lee Bay.
♦ Ref: 51.22652°N, 3.87035°W

FIND FREQUENCY: ♦♦ – The cliffs of Lee Bay consist of the middle part of the Lynton Beds. The east side of the bay exposes the most fossiliferous rocks in north Devon. However, the problem is that they are not easy to access, with a climb over huge rocks required. In the middle part of the bay, some loose rocks can be found on the foreshore, which are much easier to collect from and are particularly rich in plant remains.
CHILDREN: ♦♦♦ – This location is suitable for children, as long as they keep to the middle part of the bay. The rocks on either side of the bay are too dangerous to climb.
ACCESS: ♦♦♦ – The walk from the car park is quick and easy, and the location is also easy to find by following the road through the Valley of the Rocks from Linton. However, the best area to collect from is not easy to get to, as the sea comes close to the base of the cliff even at the lowest tides, and a climb is needed over very large boulders.
TYPE: – Fossils are best found in the bedrock at the eastern end of the bay, but can also be found in loose rocks within the middle part of the bay.

Lee Bay is a small cove (also referred to in older books and maps as ‘Lee Cove’). The rocks on the eastern side are extremely rich in corals, brachiopods, crinoids, trace fossils and, in particular, plant remains.

While the best fossils can only be found by climbing the rocks at the eastern side of the cove, you can also spend time splitting the rocks in the middle part of the bay, which can yield fossils. The brachiopods Nicolella granulosa, Orthis soridida, Turbinolopsis pluriradialis, Spirifera osliolata and Spirifera aperturata are common here.

About 152m of strata is exposed here, consisting of the middle part of the Lynton beds. These are the oldest Devonian rocks in Devon and are Emsian in age. Almost the entire sequence contains fossils of some kind. 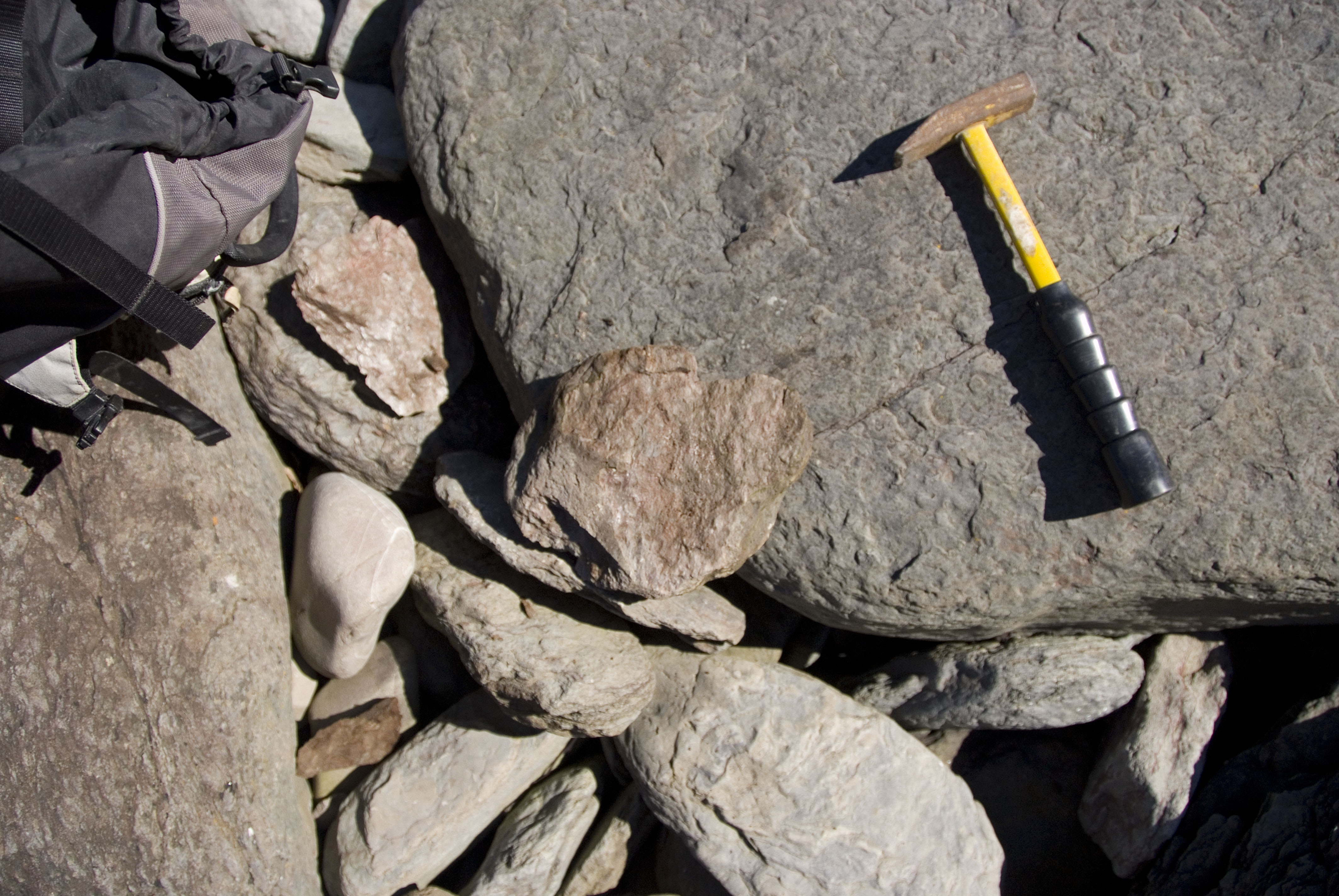 The sea always reaches the two headlands at the bay and can reach their base even at low tide. Therefore, make sure you double check tide times before you go and only collect on a falling tide. A climb will also be required if visiting the best fossiliferous rocks at the eastern end of the bay. Cliff falls frequently occur, so keep away from the cliff faces.

A splitting hammer and safety goggles are required at this location, as fossils weather quickly making them too hard to see on the surface of rocks. Therefore, you will need to split open rocks to get good specimens.

This site is an SSSI. This means you can visit the site, but hammering the bedrock is not permitted. For full information about the reasons for the status of the site and restrictions please download the PDF from Natural England – SSSI Information – Lee Bay