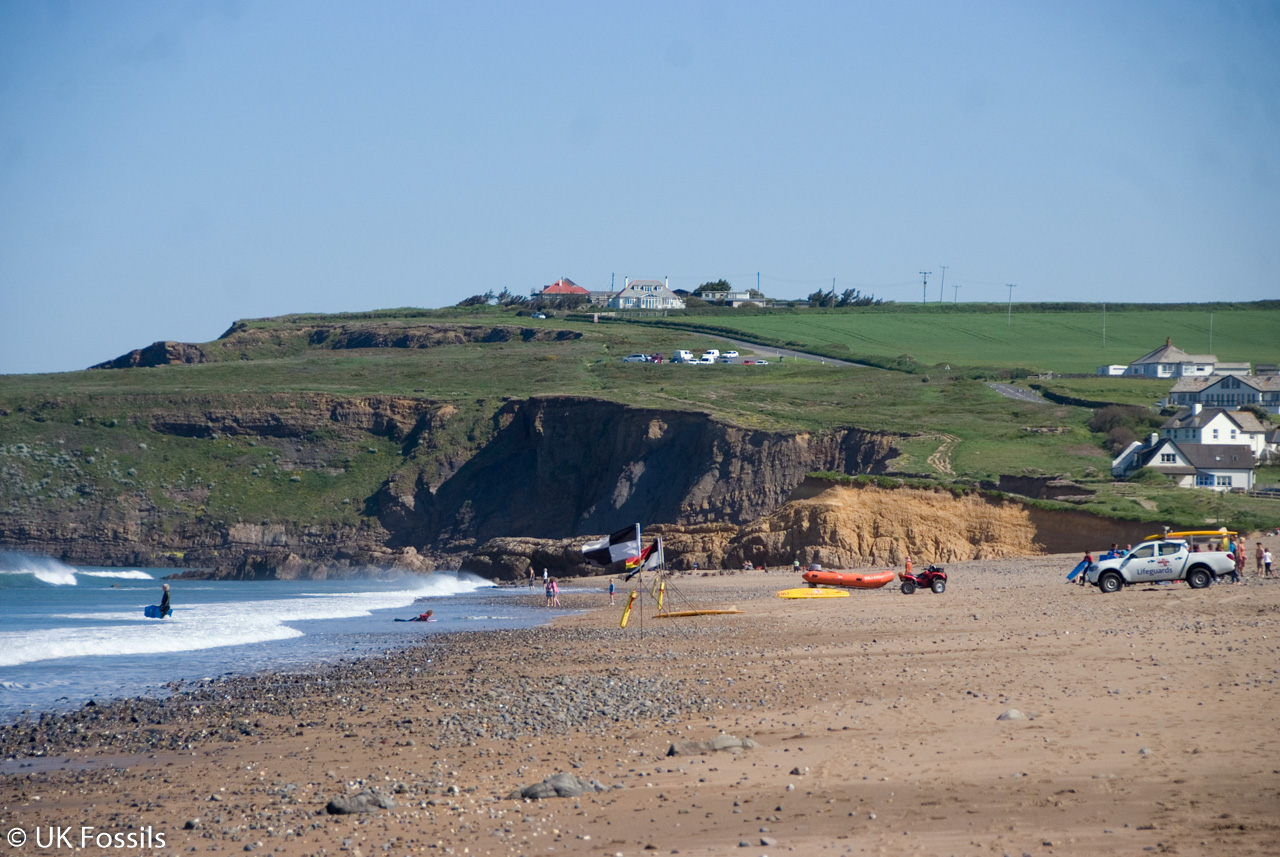 Widemouth Bay contains a number of popular holiday parks, situated with easy access to the sandy beach. This is a well-known tourist hot-spot, especially for surfers, yet few realise that it has spectacular geological features and yields a variety of Upper Carboniferous fossils.

♦ Widemouth Bay is situated to the south of Bude. The large, sandy bay is marked on maps as Widemouth Sands. It is best accessed by means of the A39 turnoff at ‘Box’s Shop’, where the narrow coastal road will take you to the main beach car park.
♦ You will have to pay for parking, but this offers the easiest access with toilets and a cafe onsite.
♦ You can either walk north towards Salthouse or south towards Wanson Mouth. However, you should never use either of these routes on an incoming tide.
♦ Ref: 50.79127°N, 4.55726°W

FIND FREQUENCY: ♦♦♦ – Upper Carboniferous fossils are not common here and finding them is dependent on locating very specific horizons, which are not easy to find when the strata runs at 90 degrees in places. Holocene shells can also be collected from deposits to the northern end of the sands, where the low cliff meets a stream.
CHILDREN: ♦♦♦♦♦ – This location is one of the top family seaside destinations and has everything you would expect for the tourist. Lifeguards are on standby around the sands and are constantly looking out for danger. When the tide is out, it is an easy walk round to the rocks at the southern and northern ends of the bay. However, the best beds for Upper Carboniferous fossils are a little further south, which are more challenging to reach due to the very rocky shores. These sites are not recommended for children.
ACCESS: ♦♦♦♦♦ – Access to Widemouth Bay is very easy, with a car park right in the centre of the bay. We recommend the use of GPS to find the specific fossil hotspots featured in this guide.
TYPE: – Fossils can be found in the cliff and foreshore deposits. Samples can also be taken from the shell-rich Holocene deposits for processing at home.

At the northern end of the bay, Upper Carboniferous shales can yield fish remains. These are in fairly localised horizons, which can be difficult to locate. The shale is buff coloured and found sandwiched between sandstones and siltstones.

Walking further south, a low cliff of Holocene sands and clays yields a large number of molluscs. These are not very old in geological terms, but are easy to collect and of interest to most mollusc collectors. The best sections are found at SS 199 026. At the very base of this, a clay layer has yielded cow and sheep teeth, together with both land and marine molluscs.

The southern exposures contain Upper Carboniferous shales, sandstones and mudstones, which provide the best chance of finding fossils. The best fossil locality can be found about 150m to 200m, north of Wanson Mouth (SS 1956 0127). This is just round the southern headland at Widemouth Bay and should only be visited on a retreating tide. Goniatites (Gastrioceras coronatum) are common here, found either as solid or flattened impressions in black mudstone at the very foot of the cliff. Other fossiliferous horizons in the sandstone yield sand-filled impressions of goniatites and ironstone layers in the same area preserve goniatites in a light buff colour.

There are also some light coloured gritty sandstones, which contain ostracods, molluscs and worm tubes. You will probably need a good field lens to view these fossils, as they are very small. These can be seen along the foreshore just south of Wanson Mouth. Samples can also be collected for viewing under a microscope at home.

Walking slightly further south, fragments of goniatites can be seen in the base of the sandstones. These are about 65 to 150m south of the stream and 200m on the foreshore exposures.

The Silesian (Upper Carboniferous) rocks at Widemouth Bay are mostly from the Bude Formation (mostly sandstones) and the Crackington Formation (Carboniferous ~310 mya).

The Bude Formation is from the  Westphalian Stage (Langsettian to Bolsovian Substages).

The Crackington Formation age is from the Namurian Stage (Arnsbergian Substage) to the Westphalian (Langsettian Substage).

These rocks have been heavily deformed, with upright folds in the north and more horizontal folds in the south. The exposures in the northern end are typically buff-weathered sandstones, siltstones and shales from the Bude Formation.

Further south, there is a low cliff consisting of Holocene sands and clays exposures, with a thick shell bed containing a large number of mollusc species. At the top of this formation, just over a metre of sand contains fragments of sandstone and some shells. Above this, there are clay and beds of pebbles about 30cm high, and then a ferruginous sandy horizon of about 40cm. The most interesting section is found at the base, where there is a metre of buff coloured rock with sand and abundant shells. At the very base of this bed is a clay layer. These deposits reach beach level beside a stream. They are uplifted towards the north and also reoccur uplifted at Bude, at the very top of the tall cliffs.

At the southern end of the bay towards Wanson Mouth, the Widemouth South Fault causes a very obvious change from buff sandstones of the north, to grey shales and sandstones from the Crackington Measures of the south. These measures consist of mostly mudstones and shales, with thin layers of sandstones in between.

The southern and northern ends of the bay are always cut off by the tide. Therefore, it is vital that you check tide times before you visit and only collect on a retreating tide. The centre of the bay is managed by lifeguards, but they do not monitor outside of this area. In addition, the foreshore can be very rocky (particularly to the south), with tall dangerous cliffs.

A hammer and chisel is recommended and, if you plan to collect from the Holocene deposits, a trowel or pick comes in handy. Remember to take something to put your finds in, especially for the shells, which are fragile.

This site is an SSSI. This means you can visit the site, but hammering the bedrock is not permitted. For full information about the reasons for the status of the site and restrictions please download the PDF from Natural England – SSSI Information – Widemouth Bay