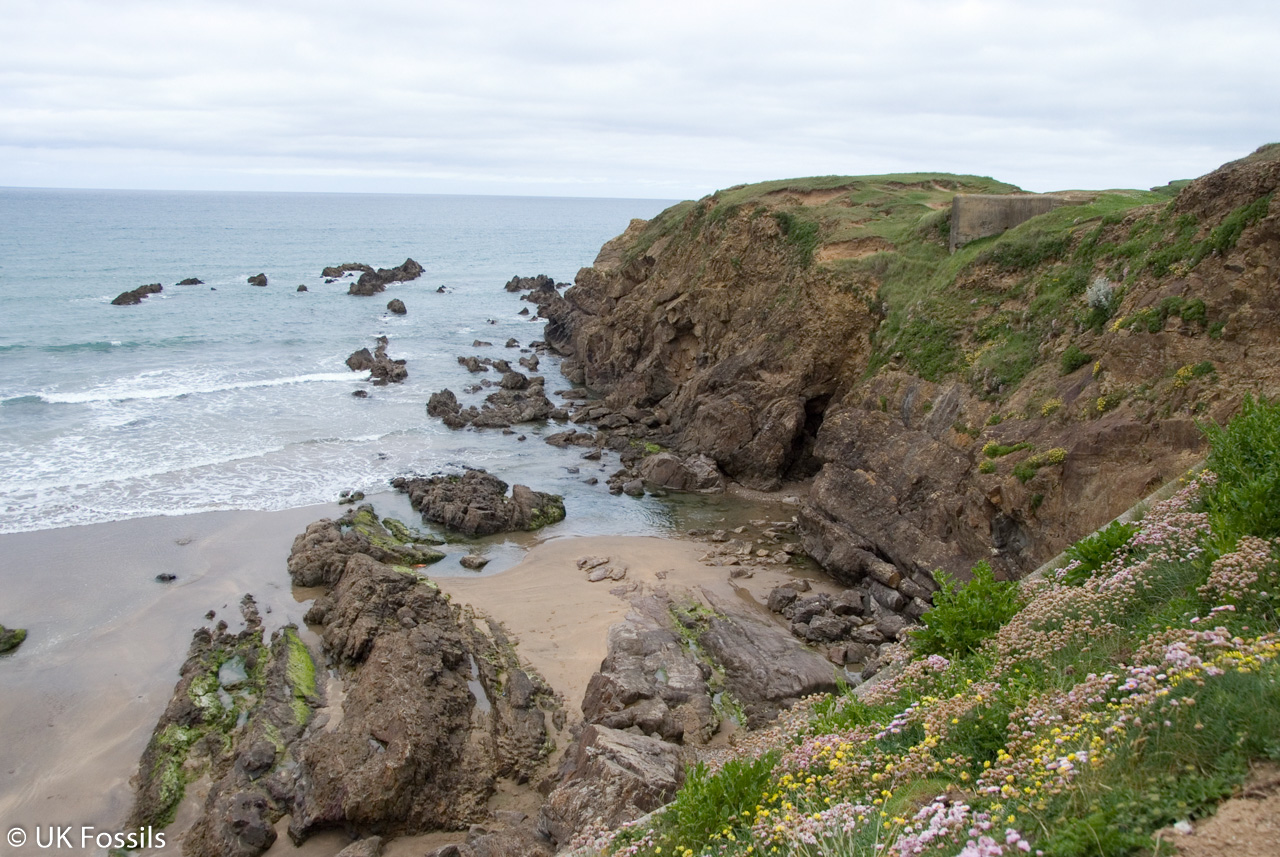 The Bude Formation, magnificently exposed in the cliffs of this popular tourist destination, is poor in fossils. However, the formation does boast a unique, 300-million-year-old fish, the goldfish-sized Cornuboniscus budensis, found nowhere else in the world! Plentiful crinoids and solitary corals can be seen (but not collected) in quarried limestone blocks used to build parts of Bude breakwater in the early 1800s).

♦ From the A39, take either the A3072 or A3073 downhill into Bude. Follow the signs to the town centre ,taking you down Bencoolen Road. At the mini-roundabout, take the first exit, immediately crossing the river bridge, and within 100m turn left into the car park of Bude Tourist Information Centre (TIC; postcode EX23 8LE; 50.82691°N, 4.54599°W).
♦ The friendly TIC staff will orientate you and provide information on accommodation, restaurants, other car parks, and activities (including ‘Bude Geo-Walks’).
♦ From the TIC, Summerleaze Beach and the Atlantic Ocean are just 500m away, along the canal wharf.
By public transport, Bude is about 90 minutes by infrequent bus (a few per day; reduced Sunday service) from Exeter St David’s railway station.
♦ Ref: 50.830533, -4.549466

FIND FREQUENCY: ♦♦ – Besides the fact that fossils can no longer be collected under the SSSI rules, the fish bed is now situated behind the swimming pool in which access is not permitted. The Devonian corals are part of the breakwater defences, which if hammered would be vandalism. Only photographs can be taken.
CHILDREN: ♦♦♦♦♦ – Bude is a very pleasant seaside tourist town, popular with walkers, swimmers, surfers, kayakers, dog-walkers, geologists (school, university and oil-company field trips), and families with small children. There is negligible nightlife for teenagers. The glorious, historical Bude Sea Pool and two beautiful, large sandy beaches are managed by lifeguards. The beach continues northward from Bude for many kilometres, so finding your own private sector is easy. Please be aware of tide times (to avoid being cut off between promontories) and stay clear of the cliff base (rockfall hazard).
ACCESS: ♦♦♦♦♦ – Bude has excellent Pay & Display car parks (with toilets), from which it is only a few minutes’ walk to the beaches, shops, supermarkets, cafes and restaurants. There is easy access to the beaches, on foot and by wheelchair.
TYPE: – The fossils are found within the Bude Formation, exposed in the cliff. The original bed fish is however now situated behind the public swimming pool, so is no longer accessible for study. Corals can be seen from the breakwater defences along the foreshore.

The fossils occur in full relief inside scarce nodules in a 4m-thick shale band. Collecting from this “Bude Fish Bed” is not possible, because (A) the location is difficult to get at, in the cliff behind Bude Sea Pool, (B) the cliff here is overhanging, so hammering is very likely to cause a rockfall, and (C) Bude is in a Site of Special Scientific Interest (SSSI), so hammering is not allowed.

Of the 28 known specimens (first discovered before 1938), all housed in the Natural History Museum (London), one was repatriated to Bude in 2012 and is now on display in the museum at Bude Castle Heritage Centre, where the public can admire this fish’s exquisitely preserved details.

Plentiful crinoids and solitary corals can be seen (but not collected) in quarried limestone blocks used to build parts of Bude breakwater in the early 1800s); other blocks occur as quoins in the old Lower Wharf buildings nearest the sea. The limestone is possibly of Devonian age, from Devon, and/or Lower Carboniferous, from South Wales.

The folded sandstone and shale beds exposed so wonderfully in the cliffs in and around Bude belong to the Bude Formation of Silesian (Upper Carboniferous) age (~310 mya ) which is from the Westphalian Stages (Langsettian to Bolsovian).

For details see:W.R. Dearman et al., 1970. The North Coast of Cornwall from Bude to Tintagel. Geologists’ Association Guide No. 10.
E.C. Freshney et al., 1979. Geology of the Country Around Bude and Bradworthy. Memoir of the Geological Survey of Great Britain, Sheets 307 and 308.

Rockfalls are a constant hazard, so visitors (except hard-hatted geologists) should keep away from the cliff base. When exploring coves to the north and south of Bude, beware of being cut off by the rising tide if there is no escape path up the cliff.

Hand lens and camera. The fossils in the limestone blocks on the breakwater (see above) are easily seen with the naked eye, especially when the rock is wet.

This site is an SSSI. This means you can visit the site, but hammering the bedrock is not permitted. For full information about the reasons for the status of the site and restrictions please download the PDF from Natural England – SSSI Information – Bude