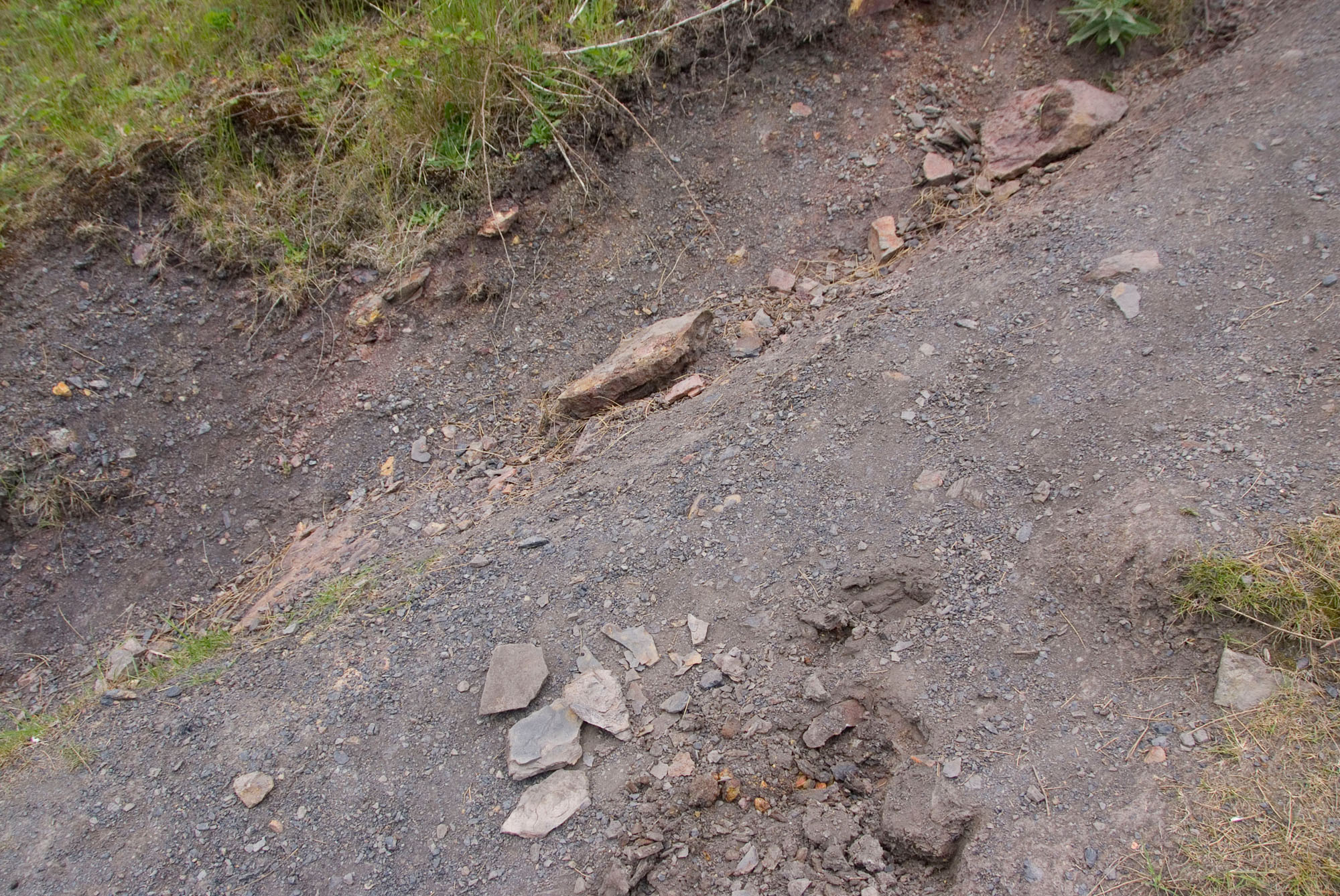 FIND FREQUENCY: ♦♦♦ – The most common finds here are stems of plants, including ferns. Some of the red coloured shale contains poorly preserved fossils, but the black shale often contains well-preserved specimens. This site is now quite overgrown and not as fossiliferous as the Radstock area. However, fossils can still easily be found.
CHILDREN: ♦♦♦ – Older children can visit this site, as long as they take care on the steep slope. This is the only area where the heap is being eroded and may be difficult to climb for younger children.
ACCESS: ♦♦♦ – The site is easy to find, although the steep climb may be difficult for some. A few blocks of shale can sometimes be found at the base of the heap, avoiding the need to climb to the top.
TYPE: – This is an old spoil heap, which was used to dump the waste material from the local coal mines. It has been disused for a long time and is now quite overgrown.

The coal measures here are rich in fossils, although not as productive as the Radstock area. However, Chilcompton still yields some excellent specimens of plant stems, including the occasional fern. These are found both in the black shale and red beds.

Over the years, rocks have weathered and become mixed in with soil and other debris. Therefore, you really need a good pick to pull these rocks out of the path, but please do not leave the path dangerous for others, as it is a public footpath. Most of the heap is overgrown, with the footpath and under the roots of trees being the only areas where you can collect. Once you do find some slabs, carefully split them using a good hammer and chisel.

The Silesian (Upper Carboniferous) beds at Chilcompton are from the Upper Coal Measures Formation and the heap consists of the waste material from mining in the area. Due to the inconsistencies of local seams and the fact that they were usually quite thin, the mines shut down and moved out into other areas and these spoil heaps became disused. Hard rocks from the Farrington Member and Barren Red Formation are occasionally seen scattered around the spoil heap. Bands of Barren Red Coal Formation also occur within the shale at the top of this formation, but contain only poorly preserved and weathered flora.

Common sense when collecting at all locations should always be used. Chilcompton is quite a safe site, although the steep footpath up the spoil heap can be difficult to climb.

A small trowel for removing surface soil comes in handy, but most essential is a pick for removing the blocks and a splitting hammer for splitting the slabs.

This old spoil heap has public access by a public footpath and is not restricted.