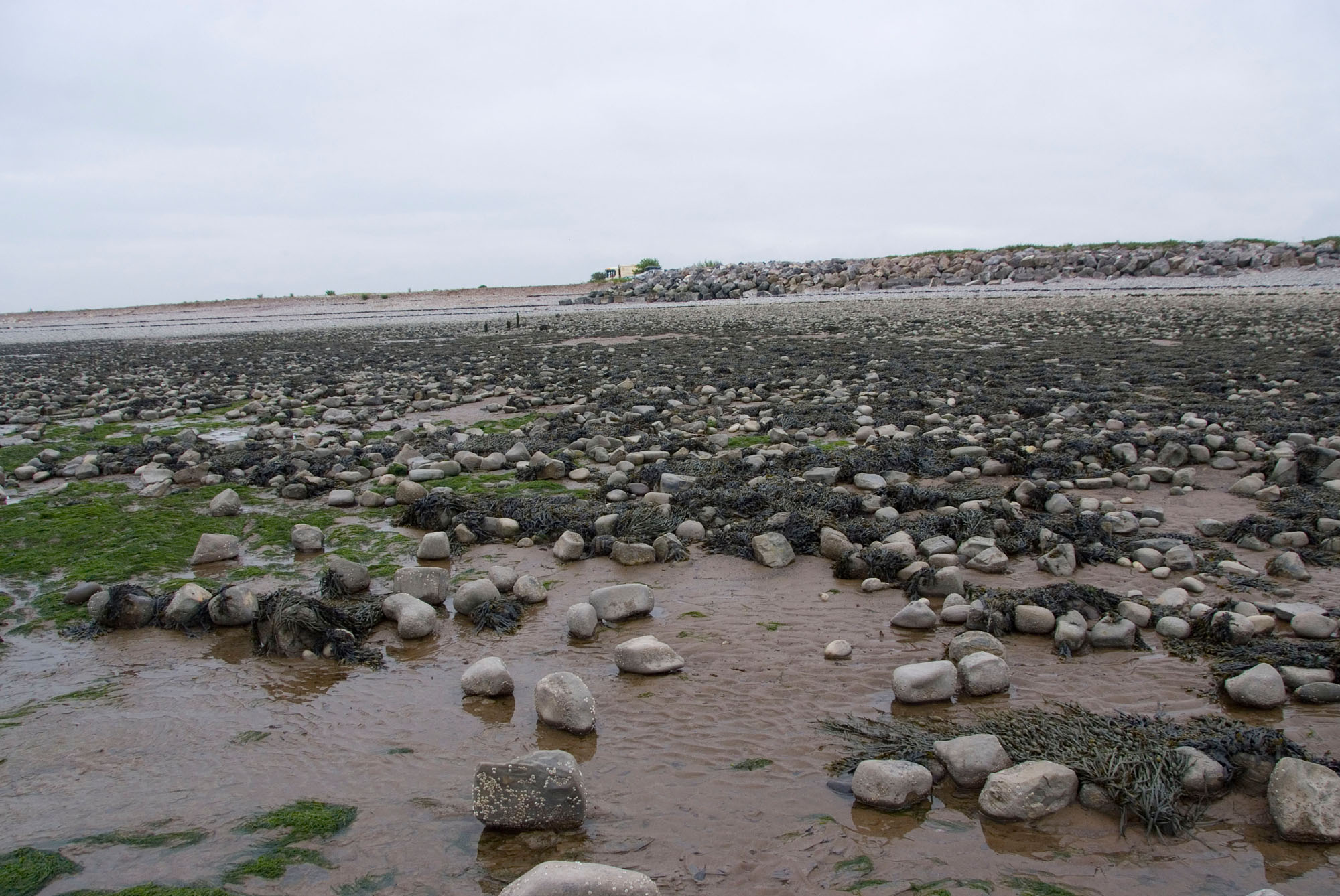 Stolford represents the most easterly coastal exposures of the Jurassic Lias in Somerset. There are no cliffs here, just a large foreshore platform consisting of limestone and shale bands. Sadly, the foreshore platform is often covered in algae and mud, making collecting quite hard.

♦ From the A39, head towards Fiddington, then Cockwood and on to Stolford. The route is all on minor roads with hamlets and most are not marked on standard maps. If you don’t have a 1:50,000 or 1:25,000 OS map, then just head to Holford and take the minor coast roads past Hinkley Point Power Station. You will eventually come to signs to Stolford, which is to the east of the power station.
♦ Go through Stolford and the road will end at a farm with a heritage sign. Drive through the gate and car parking can be found beside the beach.
♦ From here, it is a simple walk down the small rock embankment to the beach. You will need to visit on a low or fairly low tide, otherwise the platform will not be accessible.
♦ Ref: 51.20730°N, 3.09891°W

FIND FREQUENCY: ♦ – The foreshore platform is mostly covered in algae and mud and this can make collecting very difficult. The only realistic chance of finding fossils is within the Jurassic rocks and pebbles along the upper part of the beach.
CHILDREN: ♦♦♦ – Although this location is easy to access, mud on the foreshore can make it a dangerous site. There is even a warning sign about dangerous mud at the car parking area. The algae also make the foreshore slippery.
ACCESS: ♦♦♦♦ – The site is fairly easy to find. However, we recommend using the local 1:50,000 scale maps due to the number of small roads to Stolford that are not shown on standard maps.
TYPE: – The foreshore comprises an alternating limestone and shale platform, which is exposed at low tide. Fossils can be found within the platform and boulders on the foreshore.

Walking over the extensive platform, among the mud and algae, you will see clear bands of shale and limestone, similar to other sites along this coastline. However, you will quickly notice how difficult collecting is in these conditions. Fish, reptiles and shells can be found in the shale, and shells and ammonites from the limestone. However the conditions are often so bad that you will come home empty handed.

Perhaps the only realistic chance of finding fossils is by breaking up the foreshore rocks. Boulders with shell and ammonite impressions can be seen along the beach.

There is a local bylaw here which prohibits the “Removal of stones from the beach”. The definition is not exactly clear, but we suspect this means you cannot remove pebbles or stones, which make up the natural sea defence barrier and that you are allowed to remove fossils in the broken rocks or from the shale. This may or may not include the in situ deposits. However, as far as we are aware, the law has never been tested.

The Jurassic Blue Lias at Stolford is an extension of the formation from Lilstock to Hinkley Point. This is the earliest of the Blue Lias and the most easterly coastal exposure in Somerset. There are no cliffs here. Rather, there is an extensive foreshore platform, albeit often covered in mud and algae.

Common sense when collecting at all locations should always be used and you should check tide times before you visit. The main danger here is mud on the foreshore. Where the foreshore rocks have been eroded away, deep mud can infill. Take care when walking across this platform.

A hammer is ideal for splitting rocks and a pick handy for the areas of shale. Use safety goggles if breaking rocks.

There is an old local bylaw here which prohibits the “Removal of stones from the beach”. The definition is not exactly clear, but we suspect this means you cannot remove pebbles, or stones which makes up the natural sea defence barrier, and that you may be allowed to remove fossils in the broken rocks, or fossils from the shale. This may or may not include the insitu deposits, as far as we are aware the law has never been tested.