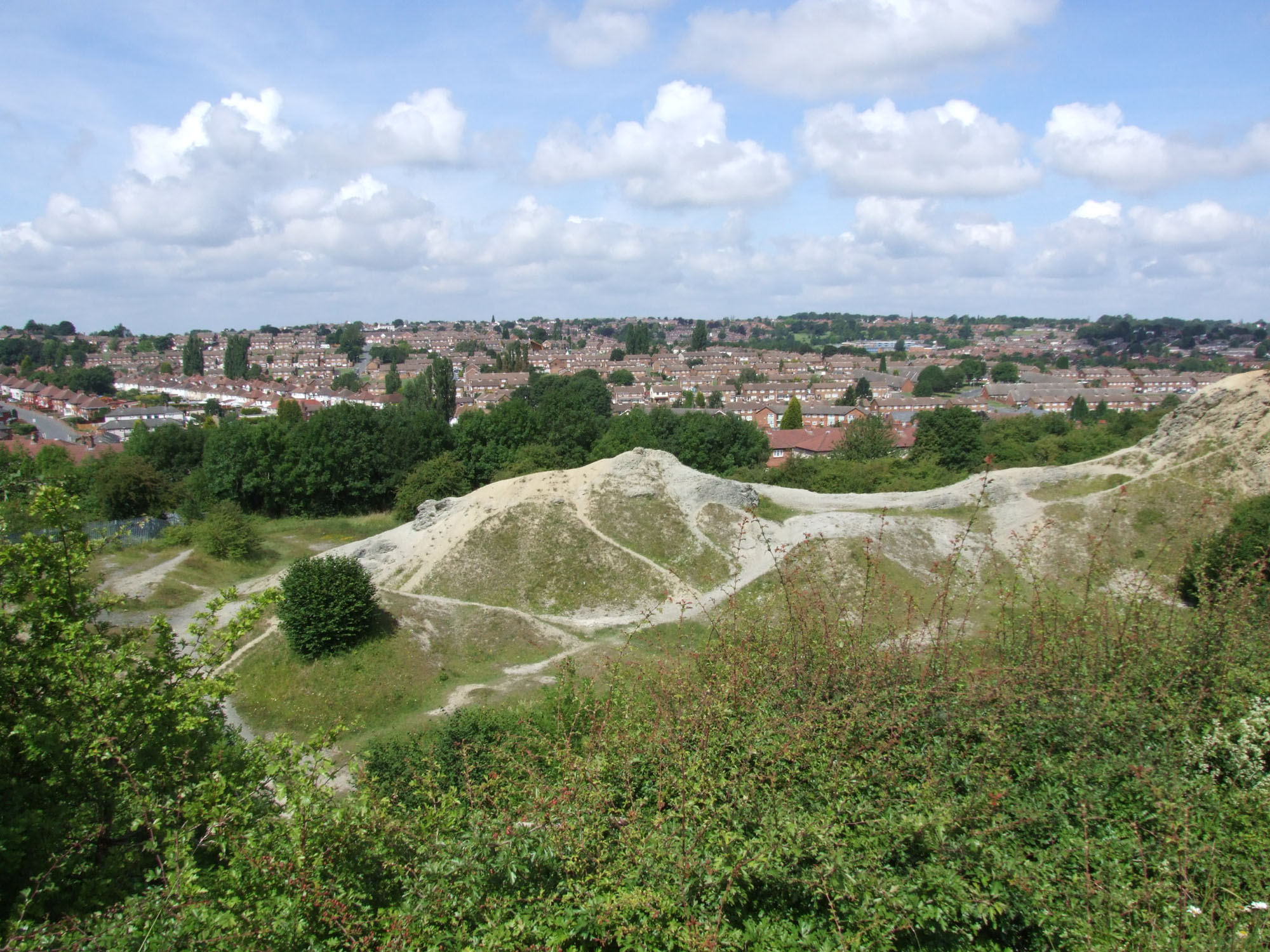 ♦ There is parking nearby at Mons Hill Campus, which is on Wren’s Hill Road.
♦ From the car par, walk out of the college gates and turn left. Go past the pub and the first green Wren’s Nest sign, which has a big trilobite on it.
♦ You will then come to a second Wren’s Nest sign. Enter the reserve here and follow the footpath past the rock exposure with trace fossils on it.
♦ The next rock formation you come to will be the massive coral beds. .
♦ Ref: SO 937920

FIND FREQUENCY: ♦♦♦♦♦ – The Wren’s Nest contains an amazing amount of fossils. Once you are at the limestone exposures, every rock you pick up is full of fossils. In particular, you can find trilobites, brachiopods, corals, crinoids, bryozoans and cephalopods. And, in the so-called “Fossil Trench”, there is a huge rock face covered in ripple marks. A fair amount of weathering takes place at the site all of the time, so there are always new fossils to be found. However, the site is a SSSI, so no hammering is allowed on the bedrock.
CHILDREN: ♦♦♦♦ – This site is a good one for children and fossils are easy to find, with loads to be found beside the paths and reef mounds, and in the so-called “Fossil Trench”. In addition, many of the paths are suitable for wheelchairs. However, there are currently no visitor facilities or toilets. The nearest refreshments are in Dudley.
ACCESS: ♦♦♦♦♦ – Car parking at Mons Hill College car park is free. It is a two minute walk from here to the nature reserve and a five minute walk to the exposures. Getting about is easy, as it’s a well kept nature reserve.
TYPE: – The Wren’s Nest is a disused Victorian quarry, which has been turned into a nature reserve. Fossils are found along some of the walks and on rock exposures in the nature reserve, but do not hammer on any of these, as this site is an SSSI. However, loose fossils can be picked up and kept. You do not need permission to look for fossils, but the local council (Dudley) likes to know who’s been hunting – so drop them a line to be polite.

The Wren’s Nest National Nature Reserve is world famous for its huge variety of Silurian fossils. Indeed, the town of Dudley has adopted a trilobite as part of its coat of arms – the trilobite, Calymene blumenbachi, was so commonly found by miners in Victorian times that they gave it the nick-name “the Dudley bug”.

Over 700 diﬀerent types of fossil can be found here; 186 fossil species of which were ﬁrst discovered and described here and 86 are found nowhere else on earth. Wren’s Nest contains the most diverse and abundant fossil fauna found in the British Isles and the fossils are among the most perfectly preserved Silurian fossils in the world. Despite the frequency of visitors at Wren’s Nest, the constantly eroding rocks and build up of scree, allows safe and productive fossil collecting. The site is ideal for children, although there are no toilet facilities within the site.

At Wren’s Nest, there are so many fossils to collect that you will easily ﬁnd something to take home with you. Take your time and look at the loose material on the ground. Remember do not use hammers or other tools on the rock faces. Hammers are totally banned from this site, in any case.

Fossils to be found include trilobites (especially Calymene blumenbachii-­‐ the ‘Dudley bug’), crinoids, brachiopods (some of the easiest fossils to ﬁnd on Wren’s Nest are brachiopods, such as Atrypa, Strophonella and Leptaena), corals, sponges, bryozoans, gastropods, bivalves (especially Goniophora and Pteronitella), criconarids, nautiloids  a superb example of a Silurian reef ecosystem.

The Silurian rock faces of the quarry give visitors a chance to see a window into the Silurian world. The limestone outcrops provide a definitive section through the Coalbrookdale and Much Wenlock Limestone Formations, which are exceptionally rich in marine invertebrate fossils, together with a variety of structural and sedimentological features. They were deposited in the Homerian stage (420 to 423 Mya) of the Silurian, during the early part of the Wenlock epoch of the Silurian period. Rocks are made up from the material remnants of an ancient tropical seabed and often contain ripple marks.

No hammering allowed. Hammers are NOT permitted on site, The only tools you will need are a handheld magnifying glass, walking boots and a mobile phone.

You don’t need permission to hunt at this site. But the local council (Dudley) would like to be informed of who’s been hunting there. So drop them a line before you visit.