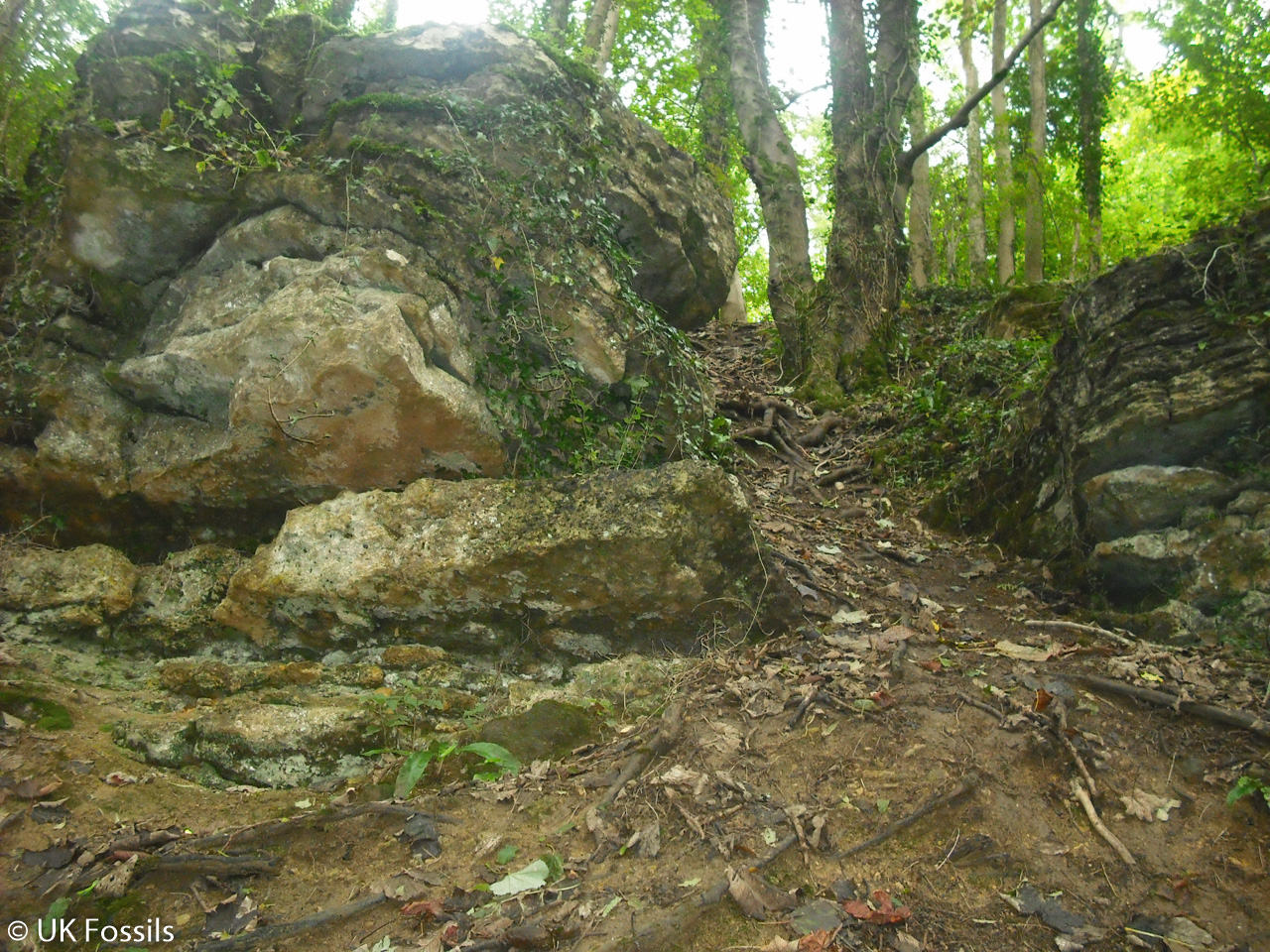 Brown’s Folly is located in a nature reserve. Fossils can be found everywhere in the old quarries in the area and many exposures of Great Oolite can be seen. The reserve is managed by the Avon Wildlife Trust and kept clear by the Bath Geological Society. The site is an SSSI, so no hammering on the bedrock is allowed, but loose material can be picked up and collected.

♦ The nature reserve is situated to the south of Bathford, which is easily accessed from the A47, to the east of Bath. Brown’s Folly is the name of the nature reserve and is marked on OS maps.
♦ The car park is also marked and is located just after the steep hill.
♦ If you do not have an OS map to hand, then drive through Bathford, taking the road to the south marked ‘Monkton Farleigh’.
♦ Ref: 51.39657°N, 2.29209°W

FIND FREQUENCY: ♦♦ – Although this site can yield quite a number of finds, they tend to be rather worn and fragmented. Since hammering on the bedrock is not permitted, one has to rely on weathering, which is why the collectible fossils tend to be quite worn.
CHILDREN: ♦♦♦♦ – Visiting the location involves a lovely walk for all the family. There is also a very nice viewpoint with panoramic views and plenty of wildlife to see on route to the quarries. The site is safe for children, but please be aware there are no toilets nearby.
ACCESS: ♦♦♦♦ – The location is well signposted, with a purpose built car park. It is also just a short and easy walk from the car park to the start of the quarries.
TYPE: – Brown’s Folly consists of a series of disused quarries. There are several scree slopes to look through, although these have been over collected in recent years. With no hammering allowed, fresh material is rarely exposed.

Over time, most quarries inside nature reserves or geological trails dotted around the UK become very unproductive because they are over collected and become covered up by scree slopes or grassed over. As with all of these sites, you should expect not to find the best fossils, but rather you should visit these sites for a pleasant walk and to see some interesting geology and wildlife (and maybe pick up a few odd fossils along the route). However, it is possible to find bivalves, brachiopods, corals, crinoids and echinoids here.
This is a lovely site to visit if only for the wonderful views, but it is not for those only interested in collecting. Having said that, if you can locate the thin clay seams, these can yield tiny echinoids, which are rather nice. Crinoids and brachiopods can also be found in this clay, but most of the fossils are worn bivalves, brachiopods and corals from the Oolite beds.

These include Forest Marble Formation at the top of the cliffs, which is 7m thick.

The Bradford Clay is below this and is represented by a thin layer 20 to 30cm thick. Bradford Clay is a thin, rather inconstant bed at the base of the Forest Marble, the two together constituting the Bradfordian group in the Bathonian series of Jurassic rocks.

This is followed by a 2.6m layer of Corsham Limestone Formation of the Great Oolite group.

Following this are the main and most exposed sequences of the Great Oolite Group; the Bath Oolite Member of the Chalfield Oolite Formation (Bathonian), which are 7m thick.

Below this, there are the 4m-thick Twinhoe Member and finally, the Combe Down Oolite Member, which is 9m thick, both also of the Chalfield Oolite Formation.

Common sense when collecting at all locations should always be used and you should check tide times before visiting. Fossils should be and are best collected from the scree slopes. Since hammering is not permitted, climbing up to reach the bedrock should not be attempted. Safe collecting can be carried out in the scree at ground level. Any attempt to climb the scree will, of course, pose safety risks from loose rocks and boulders, and from falling rocks from the higher beds.

No tools are required at this site and hammering is not permitted because it is an SSSI. However, we recommend that you take some paper to wrap your fossils in.

This site is an SSSI. This means you can visit the site, but hammering the bedrock is not permitted. For full information about the reasons for the status of the site and restrictions please download the PDF from Natural England – SSSI Information – Browns Folly