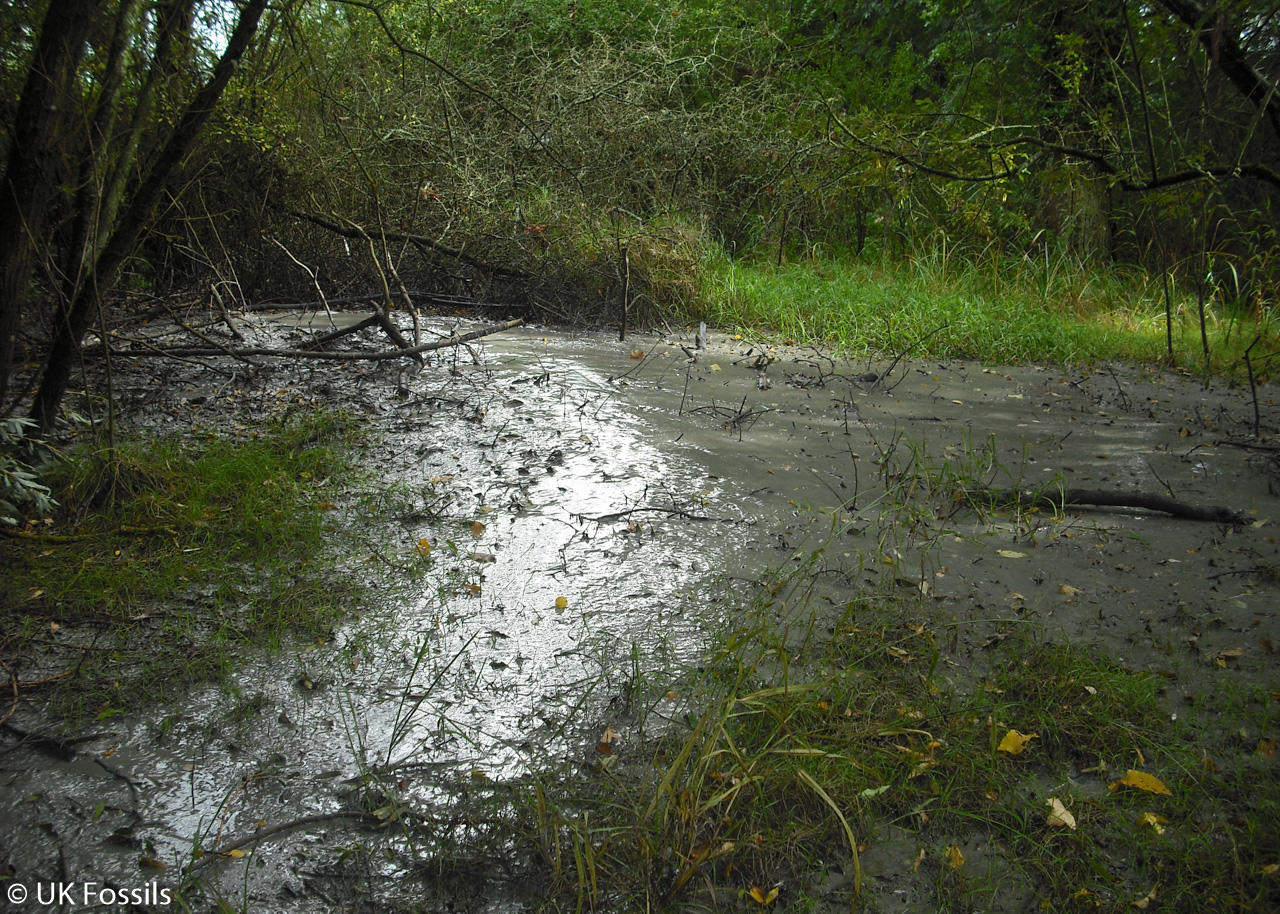 Wootton Bassett is an incredibly interesting and unique location. Fossils are found in a stream, which washes them from the famous ‘Wootton Bassett Mud Spring’. The mud spring erupts from time to time, bringing fossils from the underlying Ampthill Clay to the surface, where they are washed out by a stream from the spring. While the spring itself is fenced off, the stream is accessible.

♦ From Wootton Bassett, cross over the railway and, at the southernmost point of the town along Marlborough Road, there is a large car park on your left. Park here.
♦ Take the track from the car park, which continues east. This rough road leads to the Wilts & Berks Canal Towpath footpath. Follow the canal until the footpath reaches a crossroads. It then goes north, over a bridge over the canal.
♦ Take the path going south and cross over a stream. The mud spring is in the corpse in the far corner to the east (follow the line of the stream and you will notice it passes through a wooded area).
♦ Do not enter – this is a very dangerous place, as it can erupt at anytime. Instead, diagonally opposite the bridge and surrounding fields, there is a fence of barbed wire.
♦ The stream runs alongside the edges of these fields from the spring and it is from this that fossils can be collected.
♦ Ref: 51.532364, -1.899037

FIND FREQUENCY: ♦♦♦♦♦ – The stream that flows from the Wootton Bassett Mud Spring is crammed full of fossils. The water is usually shallow enough to walk through, though wellington boots are needed. You have a very high chance of finding fossils here and fossils are regularly being replenished by the regular eruptions of the spring.
CHILDREN: ♦ – Due to the mud spring being unpredictable and, since this location is a stream, this location is not suitable for children. Rocks and fossils can be thrown out of the spring at anytime and, although most will fall within the fenced area, some eruptions send them much further outside the perimeter.
ACCESS: ♦♦♦ – This location can be a little tricky to find without a map, so we recommend taking an OS Explorer map or using a GPS. The walk isn’t that far, but is next to fields enclosed with barbed wire. At some sections of stream, you may need to cross over that wire. The biggest problem is that the ground is very boggy and wet, so can be difficult to cross.
TYPE: – Fossils can be collected from a narrow stream, which washes from the mud spring. They are brought up from the underlying Ampthill Clay by regular eruptions of the mud spring and then fall into the surrounding area.

Fossils from the streams are very common. There is also a huge variety to be found. Most fossils originate from the Ampthill Clay (deep below the surface), but specimens from the Kimmeridge Clay (washed from the surface) can also occasionally be found, Fossils include belemnites, ammonites (especially Ringsteadia and Amoeboceras), teeth and other fish remains, teeth and other remains of sharks, lobster fragments, molluscs and ostracods. Some of these fossils are pyritised.

The best way to find fossils is to sieve the sediment in the stream. The sediment is full of fossils and, in particular, there are many small teeth to collect. However, it is not uncommon to come away with a bucket full of belemnites, ammonites and molluscs. Fresh fossils are always being replenished from the spring, so there is plenty for everyone.

Wootton Bassett is one of the most famous mud springs in the UK. There are five springs that emerge from the Kimmeridge Clay, emitting mud and fossils, which come from the underlying Ampthill Clay Formation, Sometimes, the mud dries and builds up around the vents, creating mounds about 10m across. However, after heavy rain, they can become very active. Unfortunately, due to human interference, four of the five springs are no longer active, but a fifth remains intact.

Groundwater flows from Wootton Bassett (which is situated on a hill) and follows a gentle syncline within the Corallian Beds. The Corallian aquifer rises to the surface at Wootton Bassett (where it also collects rainwater) and there is sufficient hydrostatic pressure at the lowest part of the downfold to cause upwards movement of water through the overlying clays. These have become liquefied and emerge at the surface at the mud spring.

The rocks here belong to the Ancholme Group. Both the Kimmeridge Clay (Kimmeridgian age) and the Ampthill Clay formation (Oxfordian age) are rich in fossils, many of which are brought to the surface still displaying their aragonitic shells and are quite beautifully preserved.

Common sense for collecting at all sites is important. The main danger at this site is sudden eruptions from the mud spring. We advise you to keep well away from the mud spring area, which is fenced off. Some eruptions can hurl fossils and rocks further than the fenced area. The other danger is the barbed wire surrounding the fields. Also, during prolonged wet months, the streams can become quite deep.

Wellington boots are essential for wading through the stream and you will also need a trowel. Some of the best fossils, including small teeth, can be found using a sieve. The stream is ideal for wet washing onsite, such that you can sort material at home and search for smaller fossils.

Wootton Bassett Mud Spring is situated on low boggy ground in a small coppice approximately 1 km south-east of Wootton Bassett. The spring consists of several vents which emit liquid mud all year round and at accentuated rates after periods of prolonged rainfall. This mud dries and then accretes around the vents forming mud ‘blisters’. The spring emerges from clays (the Ampthill Clay Formation) through five vents described above. It is most active during the winter and also about a month after a period of heavy rain. The vents have been shown to contain liquid mud to a depth of about 6 m. Geochemical evidence indicates that the water contained in the mud appears to originate from an aquifer in the Coral Rag Formation, the top of which underlies the Ampthill Clay Formation at a depth of 20 m, and has a sufficient hydrostatic head to drive the spring. Augering in the vicinity of the springs revealed that the area is underlain by very soft clay at depth, possibly up to 20 m, indicating that the coppice may be underlain by large pockets of soft clay and mud. Wootton Bassett Mud Spring is an example of an hydrogeological phenomenon which is only represented by a few other examples in Britain. This site is the site where the mechanism of the phenomenon has been studied in detail.