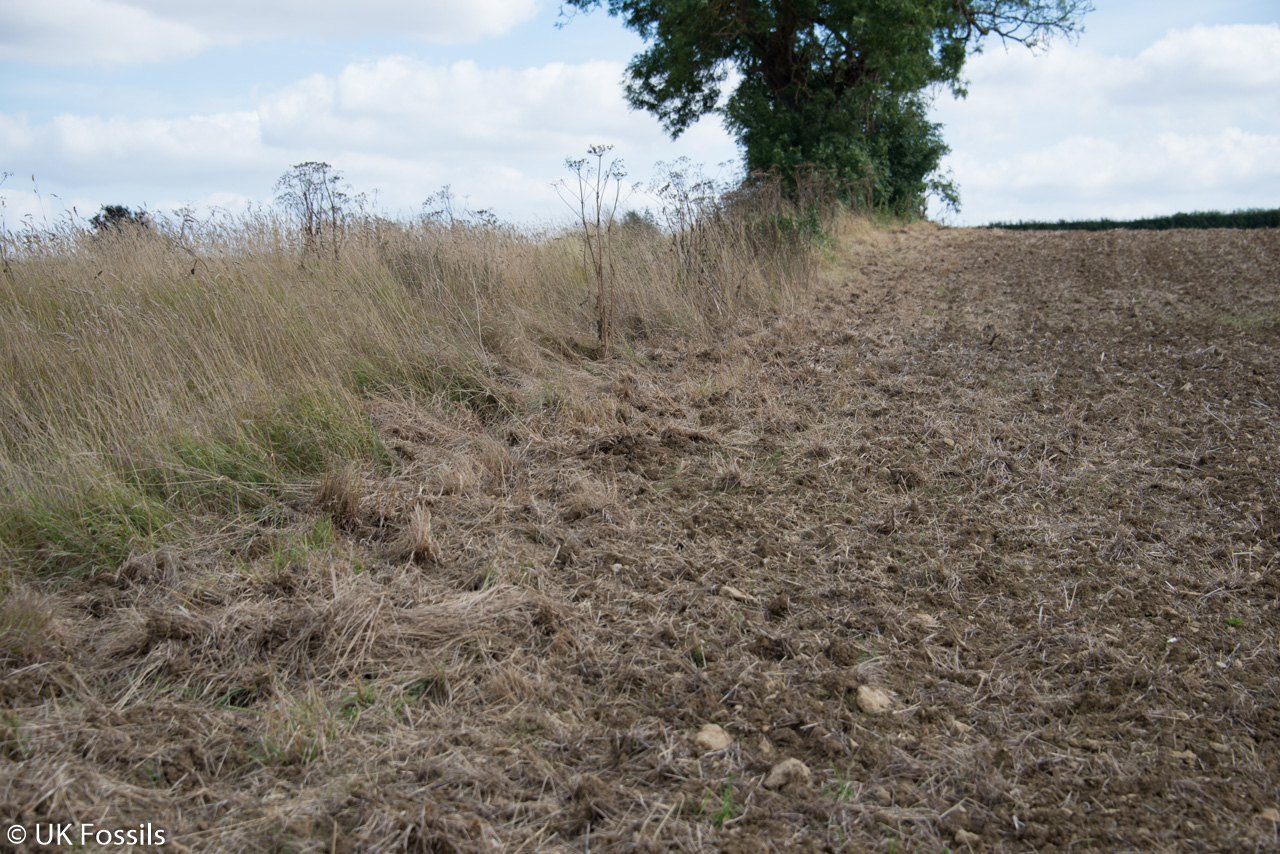 To the southwest of Cogenhoe is an extremely overgrown quarry on the top of a hill. Although the quarry itself has now become too overgrown to collect from, the public footpath, which takes you to the quarry, climbs through several different geological formations and rocks are scattered across the fields next to the footpaths. Ploughing uncovers the rocks; and it is in them that you can find fossils.

♦ On the outskirts of Northampton, to the southeast, you will find the small village of Cogenhoe. A little further southeast, you will see a disused quarry marked on OS maps, within a wooded area.
♦ You will need to approach the quarry from the south, because it here that the fields next to the footpath yield fossils. Take the A128 south of Northampton, passing Little Houghton and Brafield-on-the-Green.
♦ Do not take the turning to Cogenhoe. Instead, continue on the A128 to Derton, then take Whiston Road to the east of Derton towards Whiston.
♦ About half way between Derton and Whiston, you will see a public footpath on the left. It is actually the only footpath to the left of the road – all the others are on the right, so it should be easy to spot.
♦ Follow the footpath along the first field and then continue to follow the path that eventually veers right meeting another path. Just a few metres after this, a second footpath crosses a bridge over a stream.
♦ Now follow the path and climb the hill. Rocks are exposed in the fields both south and also north of the stream, until you reach the quarry at the top of the hill.
♦ Ref: 52.150625, -0.901136

FIND FREQUENCY: ♦♦ – There are plenty of rocks to look through, but fossils tend to be uncommon and poorly preserved. Several slabs of limestone rich in shells can be seen, but these tend to be fragmented. However, evidence of fossils can definitely be seen, which makes this more of a location for families with older children looking for ‘signs of life’ or the exploring geologist, rather than hardcore collectors.
CHILDREN: ♦♦♦♦ – This is a lovely walk for all the family. Younger children may struggle if they are not used to walking, especially up the steepest part of the hill. But, it does make a wonderful day out, in which children can examine the rocks along the path in a safe environment.
ACCESS: ♦♦♦ – You may struggle to find this location, so it is recommended that you use OS maps that show footpaths. There is only enough parking for one or two cars, and no other parking along the narrow road is possible. Therefore, if the space is taken, it could turn into a very long walk.
TYPE: – At the top of the hill is a quarry. This is actually completely overgrown, but the footpath up to the quarry crosses fields that are regularly ploughed. These fields are full of rocks, which gives plenty of opportunity to find fossils.

The walk will take you across two fields separated by a stream, which is crossed by a bridge. The first field does not really become productive until you reach the top, unless it has been recently ploughed. At these times, rocks from the Blisworth Limestone can be much more productive. At most other times of the year, it is better to look for rocks from the top of this field (just before the stream crossing) from the Wellingborough Limestone, which yields a variety of shells from this shelly limestone. Oysters and pectin shells are the most common. The stream then cuts through the Whitby Mudstone Formation, until about half way up the next hill. Fossils can be found in these rocks, but the field needs to have been recently ploughed for any real chance of success. The higher beds up the hill are from the Northampton Sand Formation, which include ironstones, containing poorly preserved fossil shells and moulds.

The hill climb will take you through four Jurassic successions, starting at the bottom with the Blisworth Limestone Formation (Bathonian, about 166mya); then the Wellingborough Limestone just before the stream crossing; the Whitby Mudstone Formation from the stream until about half way up the hill of the second field; and finally, the Northampton Sand Formation (Bajocian, about 175mya) at the top. The latter was quarried for its high iron content in the disused but now very overgrown quarry at the very top of the hill.

Common sense should always be used when visiting any site. Since collecting is carried out along a public footpath, there are no real safety concerns. However, be aware of the rocks along and next to the path, which are easy to trip over, especially when exploring the fields, as some of these can be very sharp.

Fossils can easily be picked up without the use of tools, as the rocks are broken up when the fields are ploughed. However, a small hammer does come in handy and, since the site is one of the only locations in the area that does not restrict the use of hammers, you might want to make the most of the opportunity.

There are currently no known restrictions at this location.