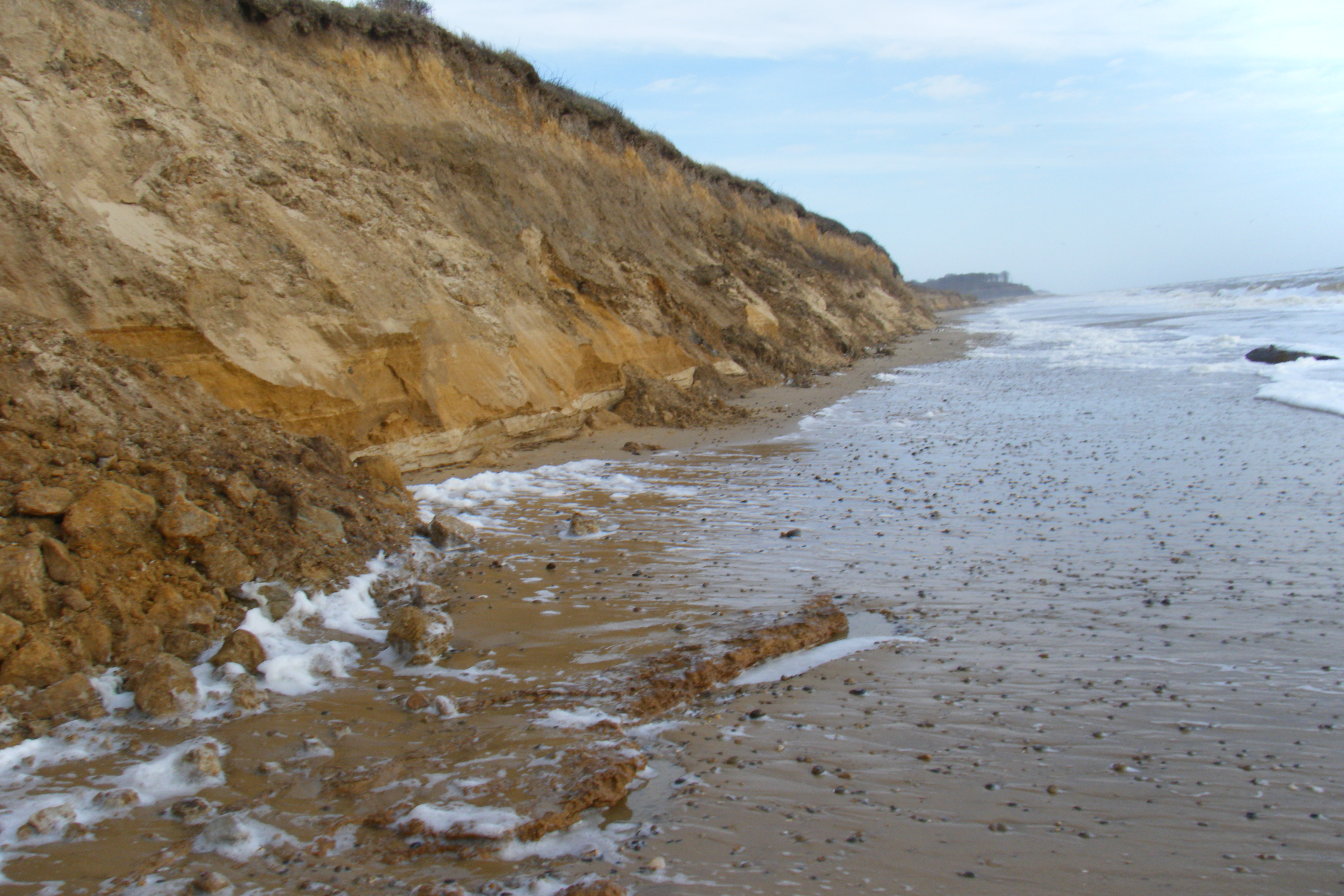 Easton Bavents is the best location in the UK for finding Pliocene mammal remains and represents the only publically accessible site where mammal remains can be found in situ from the Norwich Crag. The location is of international importance, although fossils are limited to favourable tides. Today, fossils are uncommon, due to the thinning of the beds following many years of extensive erosion.

♦ Head into Southwold, which can be reached from the A1095 (Halesworth Road) from the A12. Pass over Mights Bridge and take the second road on the left (Pier Avenue).
♦ Follow this road until you reach the pier, where a car park can be seen on the left. Park at the bottom to avoid a long walk. From here, make your way down to the foreshore, following the seawall north until the cliffs begin. The first half of the cliff is actually glacial and will yield no fossils. You need to walk up to the houses on the cliff top, where the Norwich Crag begins.
♦ However, fossils from this first cliff are actually very rare. The second, smaller cliff is where most of the fossils are found, although this cliff is normally covered up and winter tides are needed for you to find anything.
♦ Ref: 52.344097, 1.689448

FIND FREQUENCY: ♦♦♦ – Easton Bavents was once a very productive site for large mammals, when the height of the cliff was twice that of today, and the thickness of the ‘Norwich Crag Shell Beds’ was greater. Erosion is dramatically reducing the cliff, with perhaps only a couple of decades before the most productive beds completely disappear. Nevertheless, during winter storms, mammal remains are still found, but can be very fragile due to rain water softening the bones. The (now) thinner layers of clay at the top of the cliff no longer prevent water from reaching the shell beds. Fossil shells and fish remains are common, providing the exposures of shell bed are not covered up. This site is now an SSSI, so no digging in the cliff face is allowed at any time.
CHILDREN: ♦♦♦♦ – Southwold is a popular coastal seaside town and is suitable for children. However, be aware that due to an attempted ‘DIY’ sea defence by locals many years ago, the beach can often be littered with metal spikes, wire, concrete and other dangers after scouring or high tides. Keep away from the cliff at all times.
ACCESS: ♦♦♦♦ – There is very easy access, with a large car park, cafe and toilets onsite, but it can be quite a long walk. There is a much quicker access point from Easton Lane. This road will take you to a small parking area for a few cars at the bottom of the road. This is not an official footpath and you will need permission to use the car park from the local residents. A path runs along the cliff northwards, taking you directly to the second cliff, which is more productive.
TYPE: – The vast majority of fossils are found on the foreshore, after high tides wash them from the cliffs. Fossil shells, fish remains and bones can all be found in the cliff, but you are limited to collecting from slippages, due to SSSI rules restricting in situ collecting or digging.

From the pier car park, you need to walk about 500m north to near the houses on top of the cliff at Easton Lane. Here, the Norwich Crag bone bed consists of fine gravels, which yield mammalian bones and teeth. It starts from below beach level, rising to 1m or higher above beach level, near the northern end. There is no shell bed visible at this section, although the beach often yields robust fossil shells of Arctica.

Due to the high rate of erosion, remains of vertebrate fossils are regularly found on the foreshore, particularly after storms and spring tides. Less frequently, specimens have been found in situ in the cliff section and occasional foreshore exposures.

Unfortunately, there is no recently published review of the large mammals that have been found here. However, taxa collected from here include the proboscideans, Mammuthus meridionalis and Anancus arvernensis, as well as horse (Equus robustus), deer (Eucladoceros falconeri and Eucladoceros sedgwicki), gazelle (Gazella anglica), beaver (Trogontherium), cetaceans (Orca and dolphin), seals, walrus (Alachatherium cretsii) and wolves (Canis cf. etruscus).

These Norwich Crag sections have also provided rich mollusc faunas (for example, Norton and Beck, 1972). Significantly, these date from before the arrival of Macoma balthica in this part of the North Sea Basin, whereas the Wroxham Crag Formation (Previously known as the Weybourne Crag) deposits further north date from after the arrival of this species. The literature also includes studies of the foraminifera and pollen, as well as ostracods and dinoflagellates, which provide useful data for environmental reconstruction.

From the car park at the pier at Southwold, the first 500m of the walk mark cold conditions when these sediments were deposited and where the Norwich Crag is missing. The change between colder and the warmer Norwich Crag deposits can be seen in the colour of the gravels, silts and sands, walking north. This also coincides with the start of the Baventian Clay, which rests above the Norwich Crag. It is estimated is be 2.2 to 2.4myrs old.

Halfway along (in line with Easton Lane), the beginning of the Norwich Crag (Pliocene) bone bed is found at the base of the cliff, which rises to around 1m or higher towards the northern end of the southern cliffs. The bed, which consists of fine gravels, yields mammalian bones and teeth. However, there is no shell bed present at this section. It is believed that this was a river, in which the water was too fast to allow shells to be present.
A second, smaller cliff, Easton Bavents North Cliff, is the richest in large mammalian bones and teeth. The cliff has become significantly smaller in recent years, due to rapid rates of erosion, but still continues to yield some finds.

Common sense when collecting at all locations should be used and prior knowledge of tide times is essential. The cliffs at Easton Bavents are very unstable, especially during winter months. Both rainwater, which accumulates above the clay and can cause sudden cliff falls without warning, and overhanging cliffs caused by sea erosion are two reasons the cliffs are very unusable. Keep away from the base of the cliff at all times. Sinking sand after high tides can also be a danger.

Most fossils can simply be collected by picking them up off the beach. These tend to be hardened by the sea and do not require any immediate preservation. However, bones found fallen from the cliff or exposed in slippages can be fragile, and should be either wrapped carefully in a towel and carried back for immediate preservation, or preserved onsite, using a solution of PVA or similar. A trowel will come in handy for any deposits that have slipped at the base of the cliff.