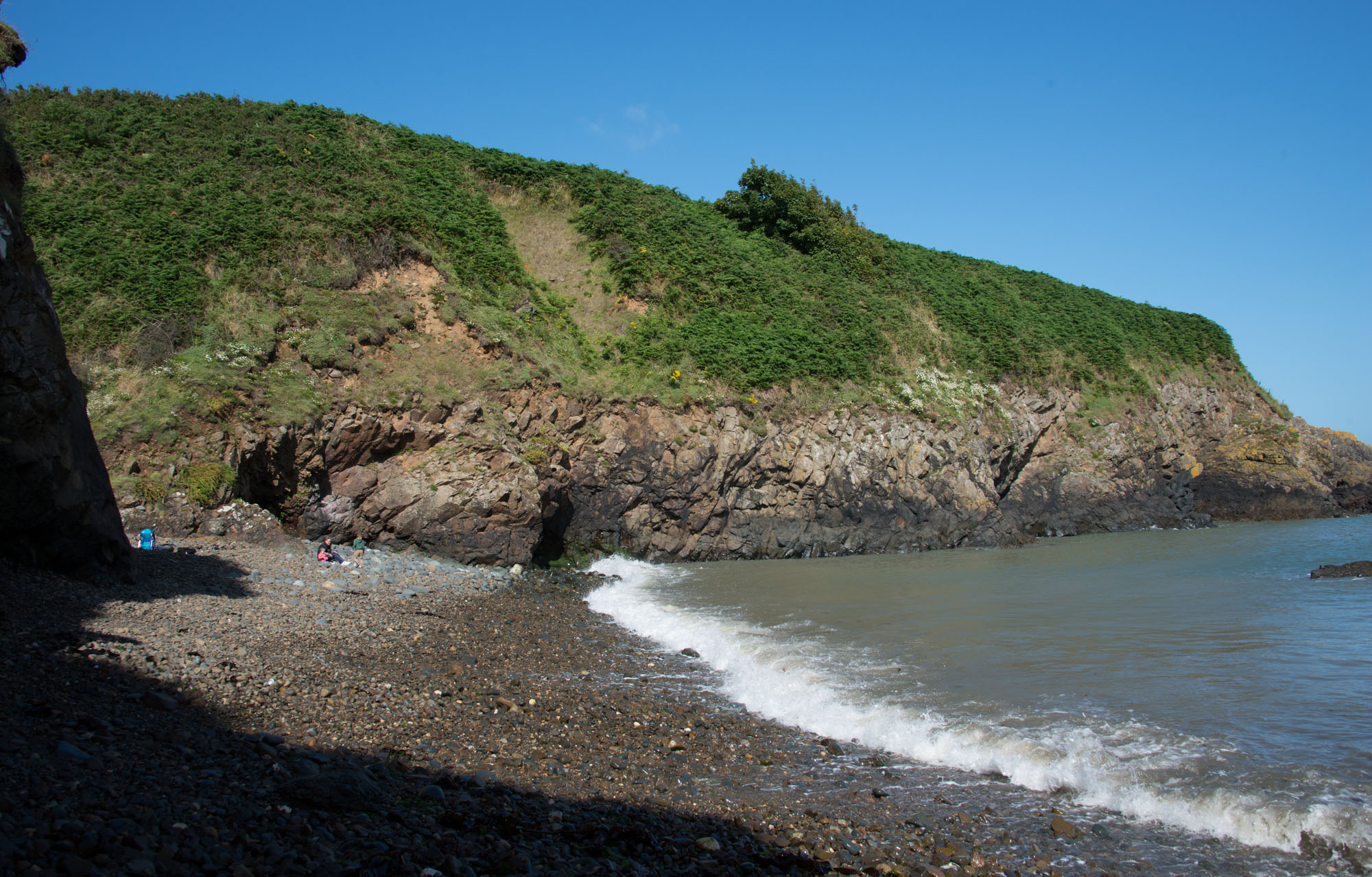 Fishguard is a similar location to Abereiddy Bay, where graptolites can be found in shales, wedged between the volcanic rocks in the cliffs. However, unlike Abereiddy Bay, there are far fewer sections where these can be found, and they are also much harder to find.

♦ Follow the A487 to the north side of Fishguard. Just outside and at the top of the hill, there is a car park after the bend. Park here and follow the footpath north (that is, take the right hand path). Take a moment to examine the wonderful fort at the top, before continuing over the style and following the coastal footpath, which veers to the east.
♦ Follow the footpath all the way around the headland until it starts to descend almost to beach level into the bay. Here, easy access can be made to the shore, although the steep final descent can be a little slippery when wet.♦ Ref: 52.00038°N, 4.98137°W

FIND FREQUENCY: ♦ – Fossils from Fishguard can be difficult to find, because the areas of Ordovician shale wedges between the volcanic rocks are uncommon. Therefore, loose foreshore shale is also hard to find and fossils are, of course, rare.
CHILDREN: ♦♦ – Due to the fact that fossils are not common, this is not a location suitable for younger children. It is a fair walk and the final descent to the shore is steep. Older children are fine and can play in the wonderful rock pools, which are teaming with life.
ACCESS: ♦♦♦ – It is a fair walk to gain access to the shore, with the final descent being a little steep. Easier access can be found from the main Fishguard beach, but, if you wish to visit the main fossiliferous areas, the walk is subject to tidal conditions and longer.
TYPE: – Fossils are mostly found in the loose rocks along the foreshore (though rare), but can also be found in the cliff face and also in the scree slopes. However, the cliffs are too dangerous to collect from, so stick to the foreshore boulders and shale.

The cliffs are mostly unfossiliferous volcanic rocks, so fossil collectors will want to find the Ordovician shales wedged in between the cliffs. Fortunately, chunks of shale get worked out of the cliffs and onto the beach. Therefore, all you need to do is walk down to the beach and look for the soft, flaky shales found there, using a hammer only when larger pieces need to be split. The shales are sadly not common, but when found, commonly contain graptolites and trace fossils. The graptolite that is normally found here is a species known as the ‘tuning-fork’ graptolite, Didymograptus murchisoni. It existed for only a relatively short period of time, during the later part of the Middle Ordovician, about 470 to 464mya. As a result, it is used as an index fossil for this period of time, which geologists refer to as the Llanvirn stage (after a farmer’s cottage on the lane leading to the nearby Abereiddy Bay).

The rocks in the cliffs are mostly igneous intrusions and metamorphic. However, Ordovician mudstones from the Ogof Hen Formation (Arenig Series), of 479-467 Mya are wedged in between the cliff’s rocks and can occasionally be found. These get worked out of the cliffs and onto the beach.

Common sense when collecting at all locations should always be used and prior knowledge of tide times is essential. The cliffs at Penarth are extremely high and cliff falls frequently occur along this coast. The cliffs are constantly crumbling, so keep well away. If you are searching below the cliffs, ensure that you wear a hard hat at all times. In addition, even during the summer months, the tides reach the base of the seawall, so it is very easy to become cut off. Therefore, make sure you collect on a falling tide.

A Hammer and splitting chisel may be required at this location. Suitable footwear should also be worn. Any fossils should be wrapped well and placed carefully into containers, try not to rub fossils and treat as soon as possible to prevent fading.