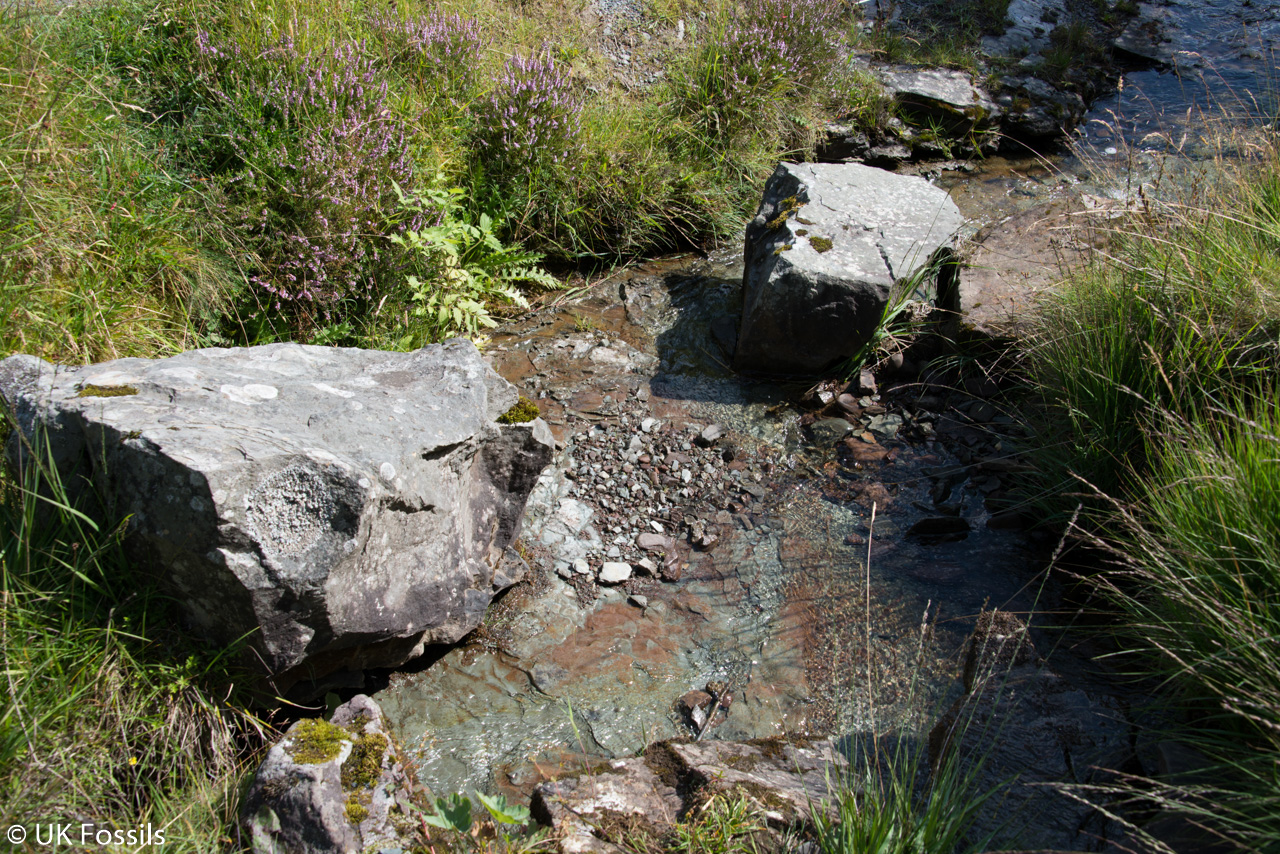 This disused quarry is situated along the main A470 through the Brecon Beacons. The quarry also contains a waterfall, which keeps the faces clean. There is strictly a no hammering allowed, due to SSSI rules and because the site falls within the Brecon Beacons National Park. However, loose material can be collected from, especially at the base of the waterfall and from the stream running through the quarry.

♦ Follow the A470 south of Brecon, which is the main route through the Brecon Beacons National Park. Pass the A4215 turnoff, and continue past the woods on the right. There is a gravel car park on the left hand side of the road marked as a viewing point on OS maps. Park here and cross the main road slightly further up the road, where you will see the disused quarry. Cross the road carefully, as this is a very busy road, with cars often exceeding the speed limit.
♦ Ref: 51.876781, -3.495626

FIND FREQUENCY: ♦♦ – Although plant remains and debris are common at this site, because it is a SSSI and falls within the Brecon Beacons National Park, hammering the bedrock is strictly prohibited. Collecting is limited to loose material and the fossiliferous rocks are mostly found within the bedrock of the quarry floor. Therefore, there is a low chance of finding fossils at this site.
CHILDREN: ♦♦♦ – Older children can visit the site, especially to admire the waterfall and stream. However, this location is not really suitable for children to collect from, since it is unlikely they will find any fossils.
ACCESS: ♦♦♦♦ – This is an easy site to find, being situated along the main A470 road, with a good car park beside the quarry and no walking involved.
TYPE: – This site is a disused quarry. It has a waterfall flowing over the steep and high cliff face, and the stream runs along the side of the quarry. Bedrock is exposed at the base, especially in the stream section.

This disused quarry is extremely important and is the type location for two species of early plants, Gosslingia breconensis Heard and Krithodeophyton croftii D. Edwards, with K croftii being the only representative of the order Bamirophytales recorded from Britain. Both are found in the productive Senni Beds, located at the base of the quarry. A number of other genera have been described from here. Indeed, the petrifactions collected at Craig y Fro are essential to any anatomical study of the Senni Beds flora, and are second only in importance to those from the internationally renowned Rynie Chert locality in Scotland in respect of the quality of their preservation. For these reasons, the use of hammers is strictly prohibited. Loose rocks can be collected, but not hammered. The plants can be found in the thin, mica-rich rocks.

The rocks in this quarry are from the Early Devonian epoch and are accurately dated to between the Pragian and Emsian stages (411.2 +/- 2.8 to 407 +/- 2.8 Million years ago, a time which covers the development of early vascular plants.
The beds comprise Old Red Sandstone from the Brecon Subgroup. The sandstone beds consist of red, brown and purple fluvial sandstones with red mudstone interbeds.
The location is a type-location for Gosslingia breconensis Heard and Krithodeophyton Edwards, found in the Senni Beds, which are the middle of three units in the fluvial Lower Old Red Sandstone of central South Wales

The cliff edges of the disused quarry are stable and loose rocks rarely fall. However, after heavy rain, the waterfall and stream flow more rapidly and, at these times, there is more danger of falling rocks. The bedrock at the base of the quarry is also wet and slippery, due to the wide and shallow stream flowing through, allowing algae to form on the rocks.

This site is a SSSI and falls within the Brecon Beacons National Park, so hammering is strictly prohibited, including loose material. You can collect loose rocks, but not use any tools.