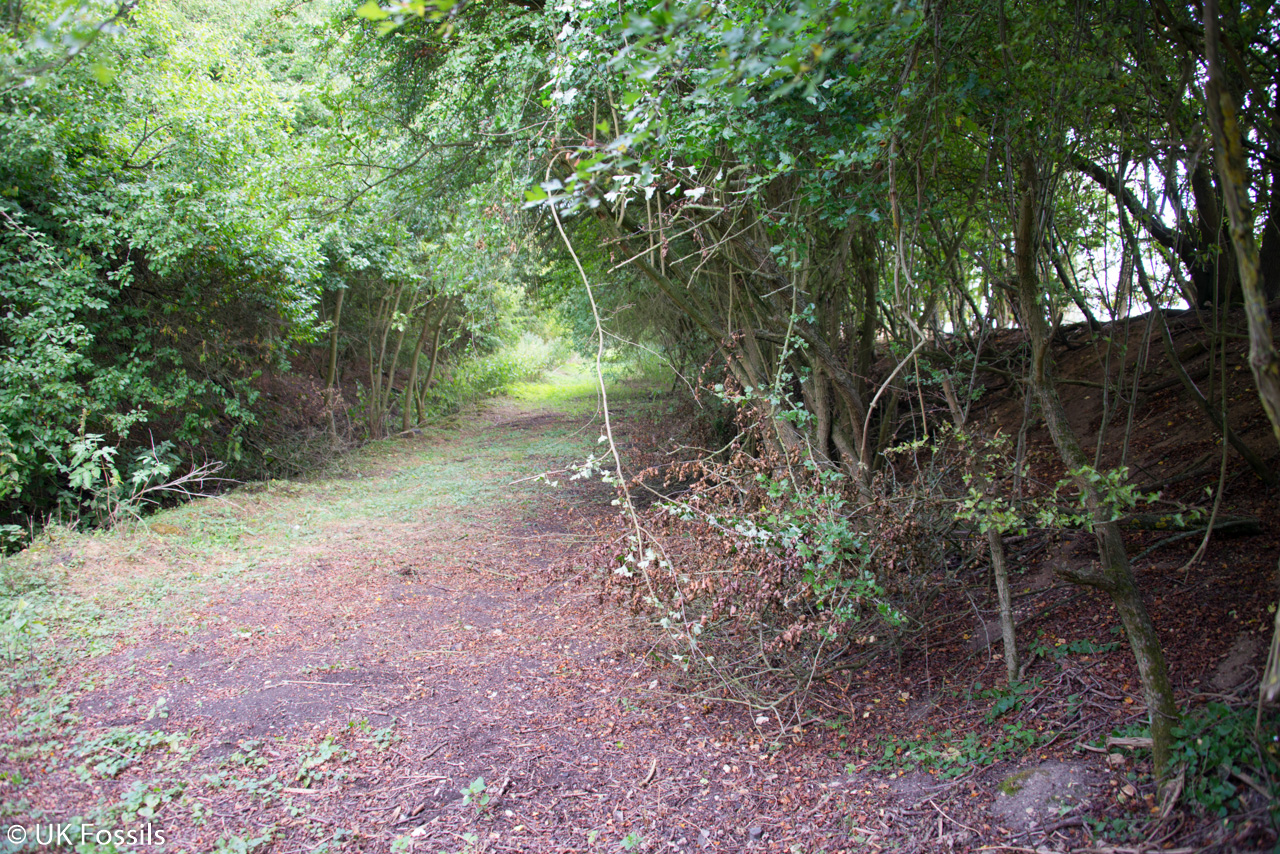 A few scattered rocks can be seen along the banks of the footpath, within this very old and overgrown railway cutting. The rocks are from the Blisworth Limestone Formation and are rich in fossils, such as echinoids and brachiopods. This site is designated as an SSSI, so hammering is not permitted on any of the rocks here.

♦ Roade can be found just south of Northampton, along the A508 (from the A45, at the northern end of the M1). The actual cutting is south of Roade, so you will need to continue along the A508 through the village.
♦ Travelling from the north, you will find a public footpath on your left going through a long row of trees, which marks the Roade cutting. This is not far from some industrial buildings just to the south of Roade.
♦ There is parking space for a couple of cars on the right hand side of the road (coming from the west).
♦ Ref: 52.150625, -0.901136

FIND FREQUENCY: ♦ – The Blisworth Limestone bedrock has almost completely been overgrown, and all that remains are a few rocks lying around and algae-stained occasional outcrops along the banks. Nevertheless, fossils can still be found in the few remaining areas, but, are limited due to the restriction on hammering at this SSSI. Therefore, because you are only able to collect loose fossils, this means that you are more than likely to come back with nothing.
CHILDREN: ♦♦ – The site is safe enough and suitable for children to visit, but they will struggle to find anything here. However, it involves a nice walk along the footpath. Also be aware that it is very dangerous crossing the road from the parking area. Many cars and lorries drive very fast along this part of the A508; and the area falls between two bends, meaning you have to be very quick when crossing.
ACCESS: ♦♦♦ – It is easy to find the site and there is parking next to the cutting. What lets this location down is having to cross such a dangerous road. The speed of traffic and the two blind bends means you almost have to run to get across safety.
TYPE: – This location is a very old and disused railway cutting, which has become very overgrown. However, it is a very important site due to its geology, so has been designated a SSSI. Fossils can be found, although they are rare, due to restrictions on hammering the rocks.

The public walkway will take you along the disused railway cutting. This was part of the original Midlands Main Line and today has been designated a SSSI, due to its geological importance. Walking through the cutting, you will notice that some limestone rocks are scattered along the sides of the footpath and banks. Occasionally, you will make out in situ bedrock, which has been stained with algae and moss. Through natural weathering, these rocks do break up and it is these small pieces that you can pick through to look for fossils. The limestone is very rich in fossils, so, although there are not many rocks or fragments left, where they do occur, you are likely to find something. However, the restriction on the use of hammers makes it more than likely that you will return with nothing. While you can collect loose fossils, removing the rocks is also not permitted, so do not take any back with you, for splitting at home. As a result of the restrictions (see below), we recommend that you to take a camera to photograph the remaining (but stained) bedrock and to appreciate its geological importance. If you do find a loose fossil, then it will be a lucky find.

The rocks at Roade are from the Blisworth Limestone Formation of Bathonian (Middle Jurassic) age of about 165mya. These rocks from the Great Oolite Group can be seen occasionally scattered along the footpath and banks of this old cutting. The original cutting, before becoming overgrown, would have exposed the complete Rutland Formation and Lincolnshire Limestone Formation, together with the Blisworth Clay. However, today, these are all overgrown.

Common sense should always be used when visiting any site. The only danger here is the extremely dangerous road – it is very dangerous crossing the road from the parking area. Many cars and lorries drive very fast along this part of the A508 and the area falls between two blind bends in the road, meaning you have to be very quick when crossing.

Hammers and other striking tools are not permitted at all at this cutting. There are no areas of scree – just a few rocks scattered around. The best chance of finding fossils is to look along the banks and rub the algae-stained loose debris looking for signs of fossils. When they do turn up, the site has some wonderful echinoids and brachiopods.

The Roade cutting exhibits one of the most complete Bathonian (Middle Jurassic) sections in central Northamptonshire, potentially exhibiting the complete Rutland Formation and White Limestone sections, together with the basal Forest Marble (Blisworth Clay). The cutting is particularly important because it shows the typical rhythmic rock units developed within the Rutland Formation in this area. The White Limestone section, which shows features comparable to the White Limestone sections in both Oxfordshire and the East Midlands, is of value for establishing detailed correlations between those two areas. The section is a particularly important one for reconstructing the environment of deposition at various times during the Bathonian.