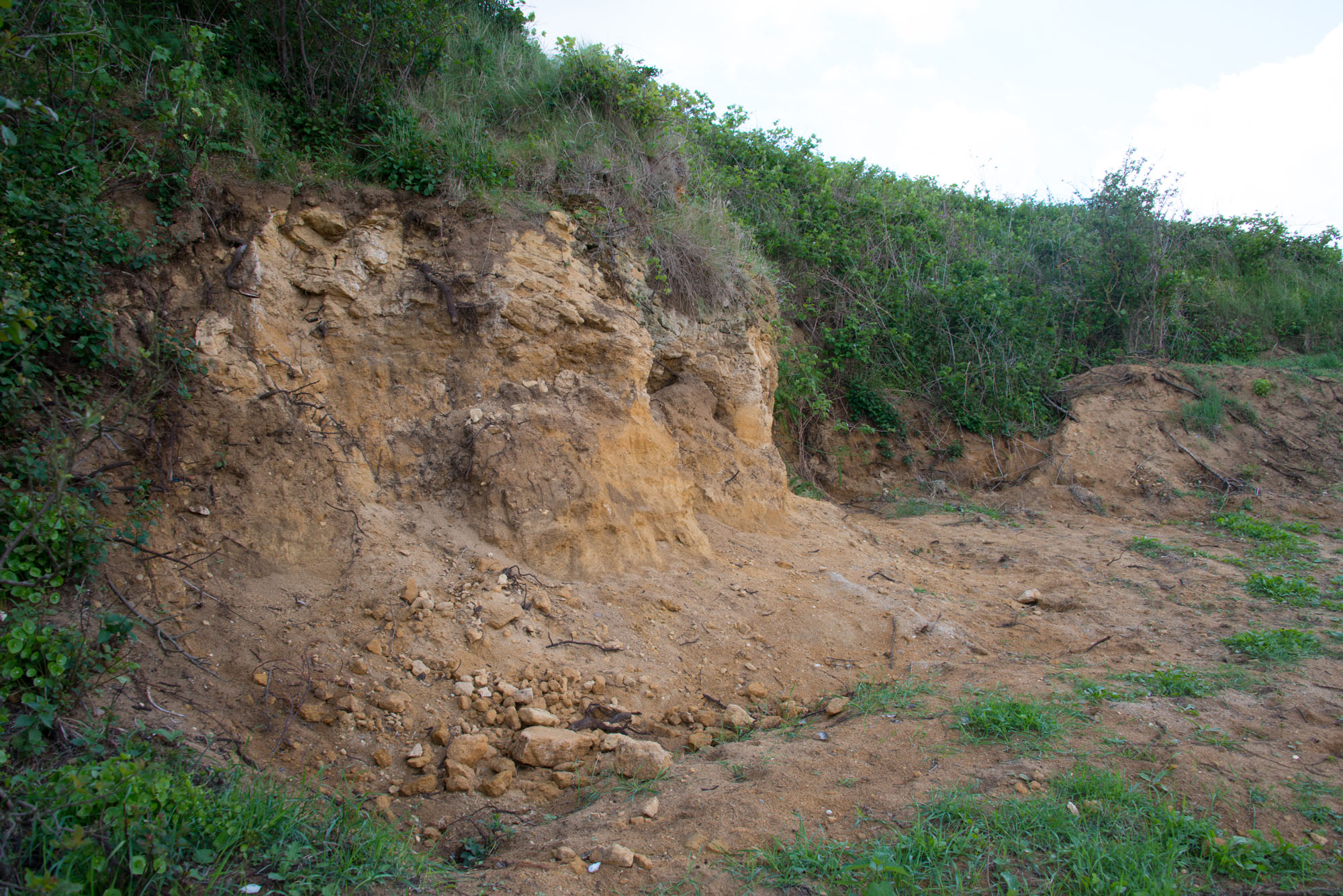 The cliffs at Gedgrave, which run along the east bank of the River Butley, were previously completely overgrown for quite a number of years, despite being recognised as an SSSI for their geological and palaeontological importance. However, as part of Natural England’s conservation of SSSI sites, a small, three metre section has been fully excavated making this site accessible once again.

♦ Gedgrave is not far from Orford, so you need to head towards this village, then take the south-western road out of the village signposted as a ‘T’. This is also the road to the Butley Ferry, which runs during peak season for walkers and hikers.
♦ Follow the road all the way down to the end and here you will see Gedgrave Hall on the left. This is now privately owned, so permission needs to be obtained to park here. The owners are usually very accommodating if you ask, but permission will be needed. Alternative parking is a fair way back up the road. Do not park in the passing places and, if you do park, allow space for large farm vehicles.
♦ This is a busy road for farm traffic. From Gedgrave Hall, there is a dirt track ahead of you, which is also a public footpath. Follow this and it will eventually veer to the right, and then down a hill leading to some buildings and a farm.
♦ The Butley Ferry is signposted here, but continue to follow the track down to the shore. Once on the shore, just to your right is where the site has been excavated.
♦ Ref: 52.084308, 1.497512

FIND FREQUENCY: ♦♦♦ – This site was re-excavated during 2014 and, at the time of writing, many shells could be seen scattered over the foreshore, where the rain had washed them down from the new excavation. It is likely that over time, these faces will stabilise and, with the SSSI restrictions on digging and hammering here, fossils will become much rarer.
CHILDREN: ♦♦♦ – This location is suitable for older children, but they should keep away from the cliff face. In addition, the low foreshore is muddy and dangerous. Children should also take care due to the large amount of farm traffic using the narrow lane.
ACCESS: ♦♦♦ – The site is fairly easy to find and is marked on OS 1:50,000 maps. If you manage to park at Gedgrave Hall, it is fairly easy access, otherwise it can be a fair walk to the location. However, it is easy going along a dirt track, which leads onto the foreshore and near to the excavation.
TYPE: – The very overgrown cliffs of Gedgrave have been re-excavated as part of the geo-conservation of SSSI sites. This provides a three metre section of Coralline Crag for study. Fossils can be picked up loose from the foreshore, but digging tools are not permitted here without consent from Natural England.

In early 2014, this site had been newly-re-excavated. Fossil molluscs can be found and collected, scattered along the foreshore, which have been washed from the re-excavated site. Since then collecting fossils has become much harder. While the cliff section should remain visible and accessible to the public for a number of years, with SSSI restrictions preventing digging or hammering the bedrock, fresh material will gradually diminish and the site will eventually become overgrown once again.

The site is important due to its rich shell fauna in the lower facies, which includes many species of molluscs and bryozoan. The site is also notable for the occasional occurrence of articulated specimens of the brachiopod Terebratula maxima, the world’s largest species of terebratulid.

At Gedgrave Cliffs, a three metre tall section of the Coralline Crag Formation (Pliocene) was once exposed when this site was frequently washed out by the tidal river. However, over the last 50 or so years, the site had become completely overgrown until Natural England re-excavated a small section, three metres wide by two metres high.

Common sense should always be used when visiting any site. The small section of cliff is only two metres high, but is still fairly unstable due to being newly excavated. Keep away from the lower end of the foreshore, where there is tidal mud. Also, be aware of the large number of farm vehicles using the narrow road that takes you to the site.

Due to SSSI restrictions at this site, digging and hammering tools are not permitted. However, fossil shells can easily be collected from the foreshore, washed down from the three metre section of excavated cliff.

This site is an SSSI. This means you can visit the site, but hammering the bedrock is not permitted. For full information about the reasons for the status of the site and restrictions please download the PDF from Natural England – SSSI Information – Gedgrave