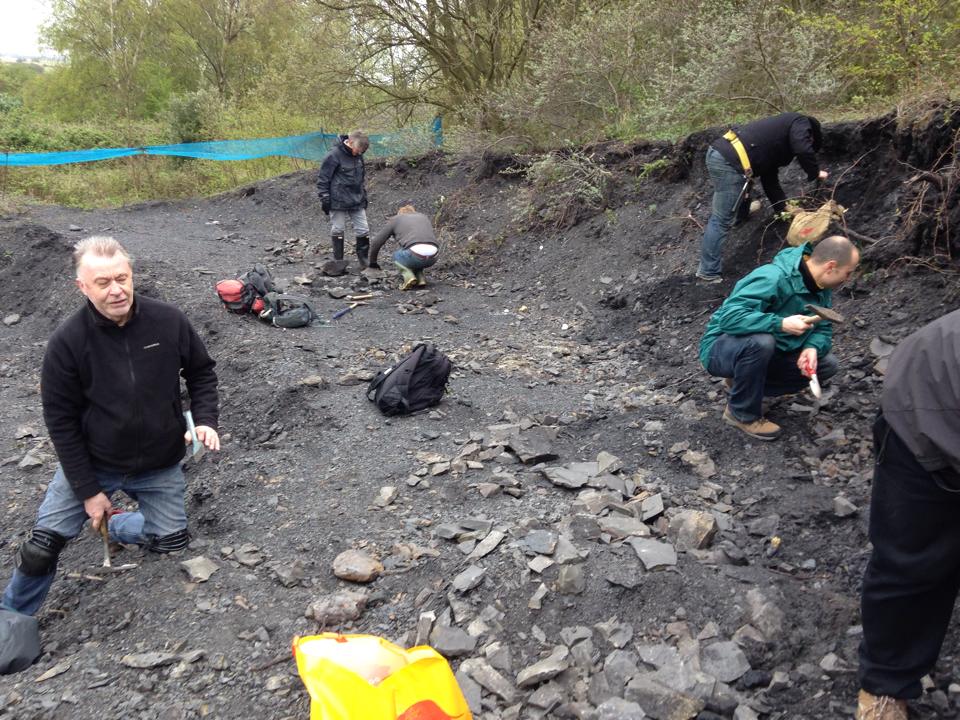 Betteshanger (formerly Fowlmead) Coutry Parkis a great site for Carboniferous plants, which are abundant and come from Kent’s former Betteshanger Colliery. Fossils are found in spoil, which is maintained by Geoconservation Kent Rigs. This is a perfect site for all the family, which is easy to access.

♦ Betteshanger Country Park can be found on the A258, approximately 3.2km from Deal in Kent. The park is off the A258, Sandwich Road at Sholden, near Deal in Kent, CT14 0BF.
♦ There is a large pay car park, as it is a county park, where you can park for the whole day. It is a five minute walk to the fossil area.
♦ All visits must be arranged with

FIND FREQUENCY: ♦♦♦♦♦– Fossils are easily found at Betteshanger, where you can walk over the site and simply pick up fossils, such as Calamites, Lepidodendron and Neuropteris. Another way of finding fossils is to dig into the spoil.
CHILDREN: ♦♦♦♦ – This is a perfect site for all the family, which is easy to access (but some sides of the spoil are steep). There are toilets and a cafe on site, within five minutes’ walk of the site. If the kids get bored, there is a play area and a cycle track.
ACCESS: ♦♦♦♦♦ – The site is easy to find, with a large car park, with parking for the whole day. The spoil heaps are five minutes’ walk from the car park.
TYPE: – Fossils at Betteshanger are found either lying on top of the spoil heap or by digging into the spoil.

Betteshanger is a RIGS spoil heap at the old Betteshanger Colliery, which was the largest in Kent but was closed in 1989. The fossil collecting spoil heap is northeast of the original site. The old Colliery has been now turned into a nature reserve and country park, with a cycle track, cafe, toilets and a play area on site. As part of Geoconservation Kent (http://www.geoconservationkent.org.uk/), there is agreement to retain a fossil hunting area within the country park. Once the current area has been used up, a new area will be made available for fossil hunters. Fossils at Betteshanger are found either lying on top of the spoil heap or by digging into the spoil. Remains of Arthropleura, a large arthropod, have been found at the site. However, unlike other coal measures sites in Europe, no insects have been found at Betteshanger. Fossils are easily found at Fowlmead, where you can walk over the site and simply pick up fossils, such as Calamites, Lepidodendron and Neuropteris.

Rocks to be found here are the scree from the former colliery and are Silesian (Upper Carboniferous) in age, from the mid-Westphalian Stage (Asturian Substage of 323.2–315.2 Mya) to the Stephanian Stage (Stephanian B Substage of 315.2–307 Mya).

The rocks are from between 316–311 Mya and mostly consist of the Kent 5 coal seam, with some Kent 7 scattered under the bench. Kent 5 is assigned to the Upper Coal Measures (Warwickshire Group) and Kent 7 to the (South Wales) Middle Coal Measures.

The site is of scientific importance because it has helped us to understand the climate and habitat of Kent some 310mya. Fossils show that there were areas of forest and river levees, with overbank deposition taking place. Remains of Arthropleura, a large arthropod, have been found at the site. However, unlike other coal measures sites in Europe, no insects have been found at Betteshanger.

Just be careful on the steep sides of the spoil heap. If it is a hot day, make sure you take a hat and sun cream, as this site is a bit of a suntrap.

A hammer, chisel, eye protection, kneeling pads, a spade and sensible footwear, such as walking boots, are all useful here.

Restrictions: RIGS, Private Land – (Collecting allowed with advanced permission)
It is important to follow our ‘Code of Conduct’ when collecting fossils or visiting any site. Please also read our ‘Terms and Conditions‘