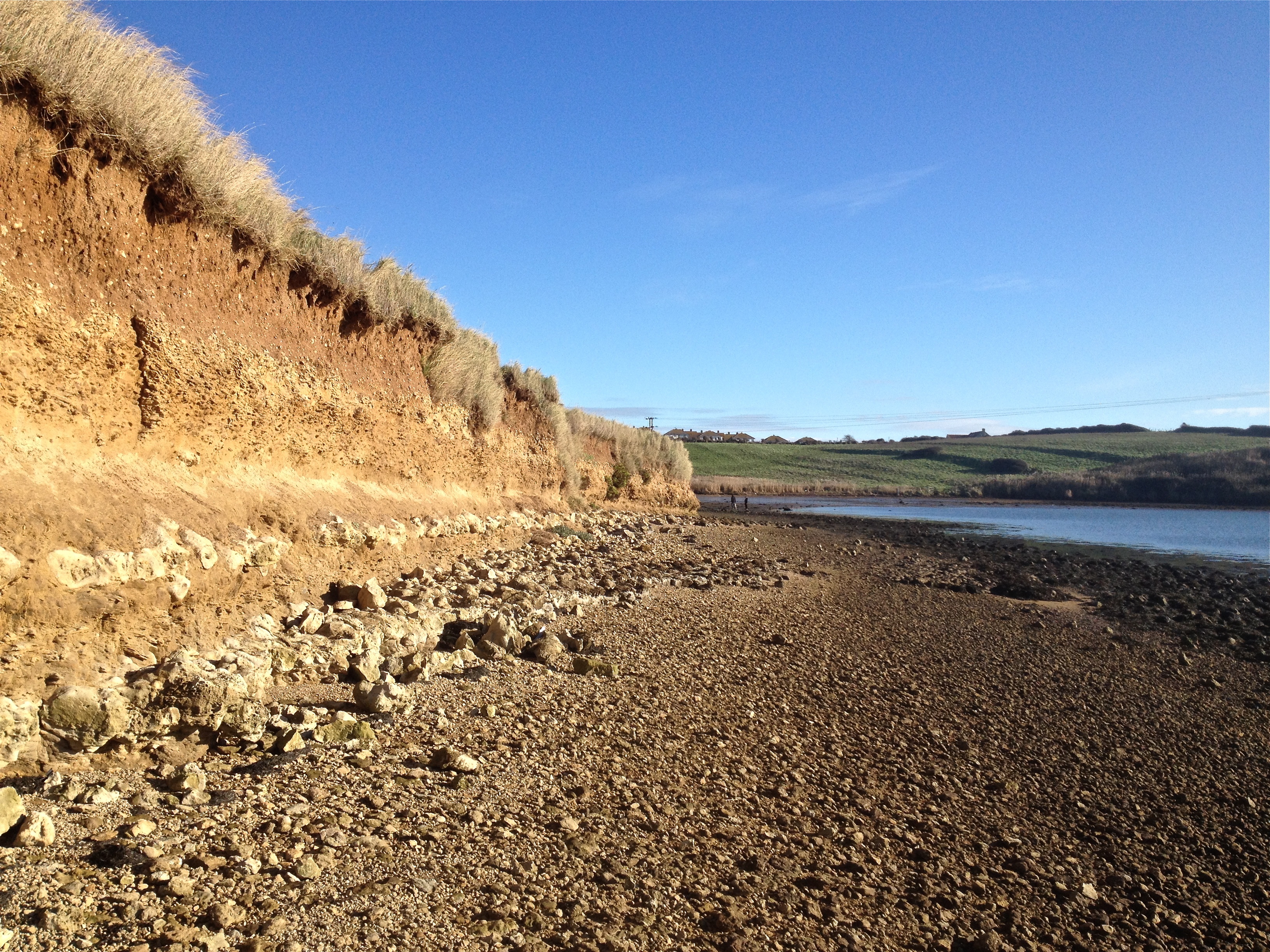 The small section of Corallian cliff at Pirates Cove, near Wyke Regis provides the collector with an abundant and varied fauna of gastropods and bivalves, as well as echinoids. With easy access, provided the tide is favourable, it is an ideal spot for a productive hour or two and not far from other sites.

The small cliffs at Pirate Cove, along The Fleet, Dorset

The low cliffs at Pirate Cove

The low cliffs at Pirate Cove

♦ The site is situated at the end of Pirates Lane in Wyke Regis The postcode is DT4 9GL.
♦ Park in Westhill Road (a residential street) and walk down Pirates Lane to the beach. The exposure of Corallian rocks lies to the right (north).
♦ Ref: SY 66016 77304

FIND FREQUENCY: ♦♦♦ – Depending on recent rates of erosion, the fossils can be found loose on the foreshore beneath the low cliff.
CHILDREN: ♦♦♦♦♦ – The site is good for children under supervision. However, the sandy bay needs to be assessed, as it can become hazardously muddy in places.
ACCESS: ♦♦♦♦♦ – Access is very easy, with parking very close to the access point at Pirates Lane.
TYPE: – Fossils are found loose on the foreshore and can be picked up easily.

At the point where Camp Road joins The Fleet, the Corallian Bencliffe Grit crops out, succeeded further south by the Osmington Oolite Formation, appearing as 12m-high cliffs. The rocks are softer than the same sequence displayed at the coast around Osmington Mills and the fossils ‘drop’ out of the rock, to be found beneath the cliff base. The trace fossil, Teichichnus (a burrowing bivalve), is well displayed and denotes the Upton Member. The Shortlake Member is a mixture of oolites, sands and clays, and, from this bed, gastropods, bivalves and echinoids can be found. The echinoid, Nucleolites scutatus, is common. The bivalves, Myophorella clavellata and Nanogyra nana, can also be found. The Sandsfoot Grit in the south-eastern section of cliff provides internal moulds of the bivalves, Pleuromya uniformis and Mactromya aceste.

Collecting fossils is always best on a low tide and will require getting on your hands and knees to carefully look on the beach beneath the cliffs.

The fossils are of Corallian age (approximately 190 to 183myrs old), consisting of the Osmington Oolite Formation, with the Nodular Rubble Member forming the top of the sequence, followed by the Shortlake Member, Upton Member and Bencliff Grit Member at the base.

You do not need any tools here, as fossils can be simply picked up loose from the beach. However, you will need something to put them in and sensible footwear is recommended.

Be aware of tides, as The Fleet is tidal and incoming tides are fast, especially close to The Fleet mouth, where this site is located. Be aware of muddy conditions beyond the firm surface of the beach, where the tide has retreated, as the mud can be slippery and deep in places.

This site is an SSSI and forms part of the UNESCO World Heritage Jurassic Coast. This means you can visit the site, but hammering the bedrock is not permitted. For full information about the reasons for the status of the site and restrictions, download the PDF from Natural England.