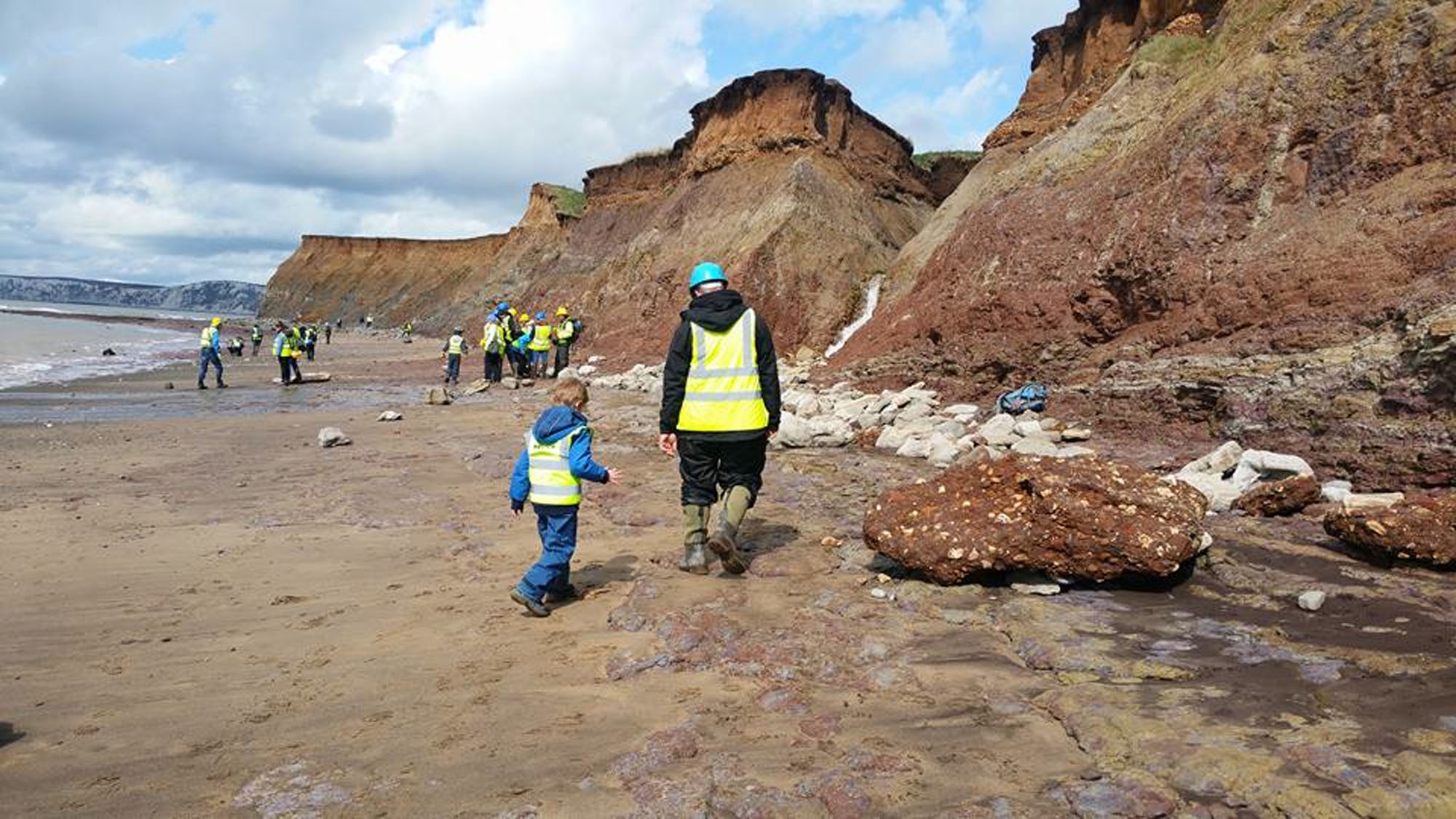 The entire section of coast along Compton Bay provides a worthwhile day out, with opportunities to ﬁnd pieces of dinosaur bone (mostly rolled) and possibly teeth; and to see the large number of dinosaur footprints scattered along the coast. This section is famous for the remains and footprints of dinosaurs, for which the Isle of Wight is famous. Both commonly occur on the foreshore.

The purple, blue and pink sediments of the cliﬀs and foreshore were deposited on an ancient river ﬂoodplain around 126 million years ago.

Compton Bay, Isle of Wight, the coastline here is rapidly eroding and the cliffs often sheer.

Foreshore and Cliffs at Compton Bay

FIND FREQUENCY: ♦♦♦♦♦ – This is the most popular location on the Isle of Wight for finding dinosaur remains. Compton Bay is also very famous for its dinosaur footprints in the rocks along the foreshore.
CHILDREN: ♦♦♦♦♦ – Compton Bay is one of the best places to take children on the Isle of Wight, providing they keep well away from the cliff. They will be fascinated to see the dinosaur footprints in the rocks and to have the opportunity to pick up dinosaur bones.
ACCESS: ♦♦♦♦♦ – There is easy access to the beach at Compton Bay from the a car park situated at Compton Chine. From the car park, you can immediately start finding fossils.
TYPE: – Fossils are found along the foreshore along with dinosaur footprints. These are all washed out from the cliff.

The entire section is famous for the remains and footprints of dinosaurs, for which the Isle of Wight is famous. Both commonly occur on the foreshore.

Dinosaur Bone from the Isle of Wight.

Dinosaur bone remains are common along Compton Bay to Hanover Point on the Isle of Wight. This is a Caudal vertebra of Postcode Iguanodon

Rolled DInosaur Bone from the Isle of Wight.

Comparing a human footprint to a dinosaur footprint found at Compton Bay, Isle of Wigth.

Dinosaur Footprint from the Isle of Wight.

Fossils are common from Compton bay, Isle of Wight.

Iguanodon footprint along the foreshore at Compton Bay.

Hanover Point is a short distance to the southeast of Compton Bay and is probably the most well-known of the dinosaur fossil localities, with both bones and footprints present. This stretch of beach is easily accessed from the carpark located at Compton Chine. However, the site is protected by the National Trust and the removal of the large dinosaur footprints is forbidden. Some are still embedded in the source exposure, a white splay crevasse sandstone, which extends from just west of Hanover Point to about 100m west of Brook Chine. They are particularly well exposed for 15m at the western end. There is also a section of dinosaur track way in a red clay bed, 150m out from the cliﬀ at Hanover Point, when heading in a south-easterly direction, but this is only accessible at a low tide.

Compton Bay and nearby Brook Bay, on the southwest coast of the Isle of Wight, are places of rapid coastal erosion. The rocks are all Cretaceous and, in the main, belong to the Lower Cretaceous Wealden Group (Barremian age, 121 to 127mya). The chalk is equally well exposed and, sandwiched between, are exposures of the Lower Greensand, Gault and Upper Greensand.

Fossils can easily be picked up along the foreshore, so tools are not needed at this location. The dinosaur footprints are protected by the National Trust and must not be taken, so we recommend bringing a camera to take photos. A small bag or collecting boxes will also come in handy.

This site is situated long a rapidly eroding coastline and cliff falls are very frequent and sudden. Therefore, keep clear of the cliffs at all time and only visit on a falling tide, as the sea often reaches the base of the cliffs.

The site is protected by the National Trust, the dinosaur footprints must not be removed from the beach. This site is also a site of special scientific interest (SSSI). This means you can visit the site, but hammering the bedrock is not permitted. For full information about the reasons for the status of the site and restrictions, download the PDF from Natural England.