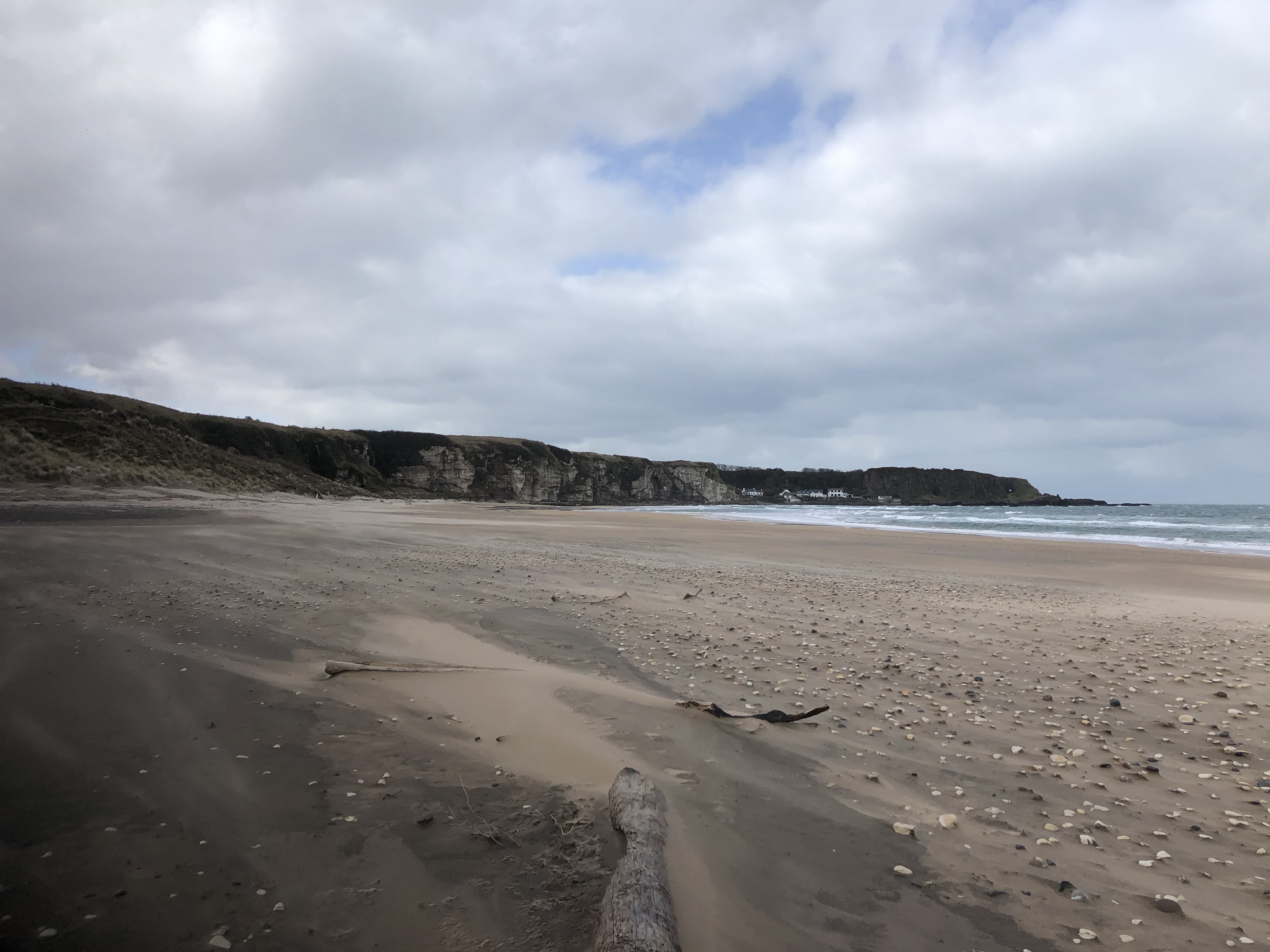 Ten kilometres northwest of Ballycastle in Co. Antrim is White Park Bay. Successive layers of rock yield Mesozoic fossils including ammonites, belemnites and Gryphaea. However, the cliffs and platforms are protected, but many loose blocks containing fossils and some washed out fossils can be found. The beach is also known as one of the few places in the world to have “singing sand” – when conditions are right, the extremely fine sand vibrates to make a humming noise. The location is also known as a historic manufacturing hub for flint axes and arrow heads, due to the abundance of flint nodules found in the cliffs, with artefacts dating back as far as 8,000 BC. The landscape also features passage tombs looking out over the sea, where, on a clear day, the coast of Scotland can be seen.

♦ White Park Bay is 10km west of Ballycastle and 2km east of Dunseverick on Whitepark Road, which is part of the A2 Causeway Coastal Route. The bay is signposted from the road.
♦ Access to the beach is by steps and a footpath from the car park located just off Whitepark Road. Be sure to use the public car park and do not trespass on the Youth Hostel grounds.
♦ From the viewpoint by the car park, there are a number of steep stone steps down to a winding pathway, which takes you past the remains of the old “hedge school” and down to the beach.
♦ NT 27940 8847955

FIND FREQUENCY: ♦♦♦ – When emerging from the footpath onto the beach, you will see Cretaceous chalk cliffs and wave cut platforms, with rocks and boulders on the beach to your left. However, it is more productive to turn right and head east towards Oweynamuck to find exposures of the Lower Jurassic Liassic Waterloo Mudstone Formation. Although much of the Lias is overlain by landslips of Cretaceous material and wind-blown sand, it can be found in scouring conditions in the toes of landslips and at low tide, particularly in a waterfall section west of the school and at Oweynamuck. Half way along the beach, at the foot of the chalk boulder field, exposures can be found at low tide in the right conditions.
CHILDREN: ♦♦♦ – The sandy beach is safe and easy to walk on, and access is not especially steep or difficult. However, the path is uneven and does involve some steep steps along its approximately 1.5km-long stretch. Searching for fossils in the chalk pebbles and rocks is straightforward, but the chalk is much harder to break than that which is typical in Southeast England. The boulder fields may prove tricky for younger children and the Lias exposures can be slippery, so care should be taken.
ACCESS: ♦♦♦♦ – From the car park, it is about a 1.5km walk to the beach. The path is not especially steep or difficult, although it does involve steep steps at the beginning and is uneven along its approximately 1.5km-long stretch. The sandy beach is easy to walk on but the boulder fields can be more of a challenge. However, they can be largely avoided, but the Lias and wave-cut platforms can be slippery.
TYPE: – Fossils are found in the foreshore exposures of Lower Jurassic Liassic mudstone and in pebbles, rocks and boulders from the overlying successions of Upper Cretaceous chalk.

Belemnites and other fossils from the chalk can be seen in blocks and pebbles, and, if found in loose blocks, will require hammering or prepping out. Fossils from the Lias can be found when it is exposed. Ammonites are often pyritised and fragile but bivalves can be extracted quite easily. Collecting should be limited to loose fossils and fossils in loose blocks, as the bedrock and cliffs are protected as a SSSI and cannot be hammered.

The rock forming the coast around White Park Bay consist of the lower Jurassic Waterloo Mudstone Formation. Resting with a major unconformity on the Lias is a thin unit of the Hibernian Greensands Formation overlain by the Cretaceous succession of the Rathlin Basin chalk deposits, including the Galboly Chalk, Cloghastucan Chalk (including the Oweynamuck Flint Bank) and the Creggan Chalk members. The chalk spans the Cenomanian to Santonian stages. The Jurassic rocks are about. 200 million years old and the chalks are about 100 to 80 million years old.

Common sense when collecting at all locations should always be used and knowledge of tide times taken into account. The sea does reach the cliffs at high tide, so collecting should be done on a falling tide. Care must be taken getting down from the embankment, as the steps may be slippery and dangerous in wet weather. There are occasional cliff paths but they are unmarked, unmade and sometimes unsafe. Therefore, we recommend they are avoided.

The site is an ASSI, so hammering the bedrock is not permitted and only loose fossils may be collected. You may wish to take a chisel hammer to split larger, loose rocks but you may not hammer the bedrock as it is protected.

This site is an area of scientific interest (ASSI). This means you can visit the site, but hammering the bedrock is not permitted. For full information about the reasons for the status of the site and restrictions, download the PDF from The Department of Agriculture, Environment and Rural Affairs