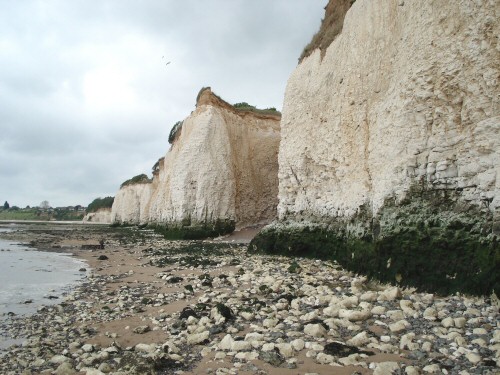 The cliff section between Pegwell Bay and Ramsgate Harbour is composed of Upper Chalk. There are many fallen blocks to investigate for sea urchin fossils, with other common finds including crinoid stem parts, brachiopods and starfish plates.

♦ The A256 runs parallel to the shore at Pegwell Bay. When you see the Viking ship, turn into one of the side roads away from the beach (for example, Mount Green Avenue). There is plenty of free parking in these roads.
♦ From here, walk towards the coast in the direction of the ship. Behind it, there are steps down to the old hover port – now unused. Walk diagonally across the concrete in the direction of the cliffs. Then walk about 300 or 400m towards the cliffs along the beach and you will start to encounter blocks of chalk. From here, there is a kilometre or more of cliff section with fallen blocks. Fossils can be found along this whole section.
♦ It is best to collect on a falling tide, but most of the section is accessible for up to three hours after low tide. However, there are quite a few points where it is possible to get cut off by the tide, so be careful.
♦ Ref: 51.32818°N, 1.37392°E

FIND FREQUENCY: ♦♦♦ – There are plenty of echinoid fossils, but the majority are broken, having been eroded by the weather and the sea. However, complete examples can be found with patience. Sponges and small fossils, such as the plates from starfish, are also common.
CHILDREN: ♦♦♦♦ – This location is suitable for children. However, the cliffs should be avoided and you should watch out for the tide.
ACCESS: ♦♦♦♦ – There is plenty of free parking at this location and it is a fairly short walk over easy terrain to get to the main fossil hunting area.
TYPE: – Fossils are found in the wave-cut platform and in the fallen blocks that have come away from the cliff. They are also present in the cliff face itself, but hammering into it should be avoided for obvious safety reasons.

Typical Micraster coranguinum zone chalk fossils are found along the whole of the section. The three most common echinoids are Conulus albogalerus, Micraster coranguinum and Echinocorys scutata. There are also plenty of drum-shaped crinoid stem segments (Bourgueticrinus sp.) and various bivalves, brachiopods and other fossils. Many of the echinoids are crushed or broken through erosion, so patience is needed if looking for complete examples. It is also worth taking a look at the Thanet Sands exposure to the west of the chalk cliffs. This is a SSSI and should not be damaged in any way.

The best collecting is carried out by investigating the many fallen blocks of chalk at the base of the cliffs. These are being slowly eroded by the sea and are constantly revealing new fossils. After strong winds, the blocks are often turned over by the waves, presenting fresh surfaces to examine. It is worth breaking open larger blocks that show evidence of broken echinoids on their surfaces, as these may contain complete examples inside. In some places, there is a wave-cut platform, although this is often obscured by sand. Fossils can also be found in the cliff, but are hazardous to collect due to the risk of falling rocks.

The site is most productive after scouring conditions, when the wave-cut platform is fully revealed and the chalk blocks have been turned over. On other occasions, plenty of patience and a thorough investigation of as much of the chalk as possible should ensure a few good finds.

Pegwel Bay on the Isle of Thanet is the type locality for three of the most conspicuous marker beds in the White Chalk Subgroup of the Southern Province: Bedwell’s Columnar Flint Band, Whitaker’s 3-inch Flint Band and the Barrois’ Sponge Bed. It is also the type area for the Margate ChalkvMember, found within the cliffs from the Newhaven Chalk Formation.

Pegwell Bay is famous for the excellent preservation in very soft chalks of fossil echinoderms and (towards the higher part of the succession) for the relative abundance of giant ammonites.

Although the whole section is faulted, faulting becomes more intense towards Ramsgate. Whitaker’s flint effectively marks the sense of fault movement as it steadily reaches the cliff top.

This site also has Palaeogene rocks. and there are exposures of the Thanet Sands of the Thanetian stage of the Palaeocene. Together with the cliffs at Reculver, Pegwell Bay provides the international stratotype section for the Thanetian stage. The youngest sediments preserved are the Reculver Silts, from the Reculver Sands Formation; a series of yellowish grey fine silty sands, with some glauconite and bands of drifted comminuted bivalve shells.

Pleistocene brick earth can be found in the cliffs below the car park, which have been compared with the loess deposits of Europe and elsewhere. This is dated as Late Devensian

Next to these is a Pleistocene periglacial infilled stream channel. On top of the chalk cliffs there are excellent examples of periglacial cryoturbation structures between the overlying Pleistocene sediments and the chalk. You may also see the Pegwell Marls containing many bivalves (Artica morrissi).

There is a risk of being cut off in the small bays and caves by the tide, which always reaches the cliffs at full tide. Unfortunately, the location often has a lot of washed up rubbish, presumably due to local currents. Therefore, watch out for glass and rusty metal.

Most fossils at Pegwell Bay can be found on the foreshore. Sometimes, fossils in chalk blocks will require a hammer, safety glasses and chisels to remove.