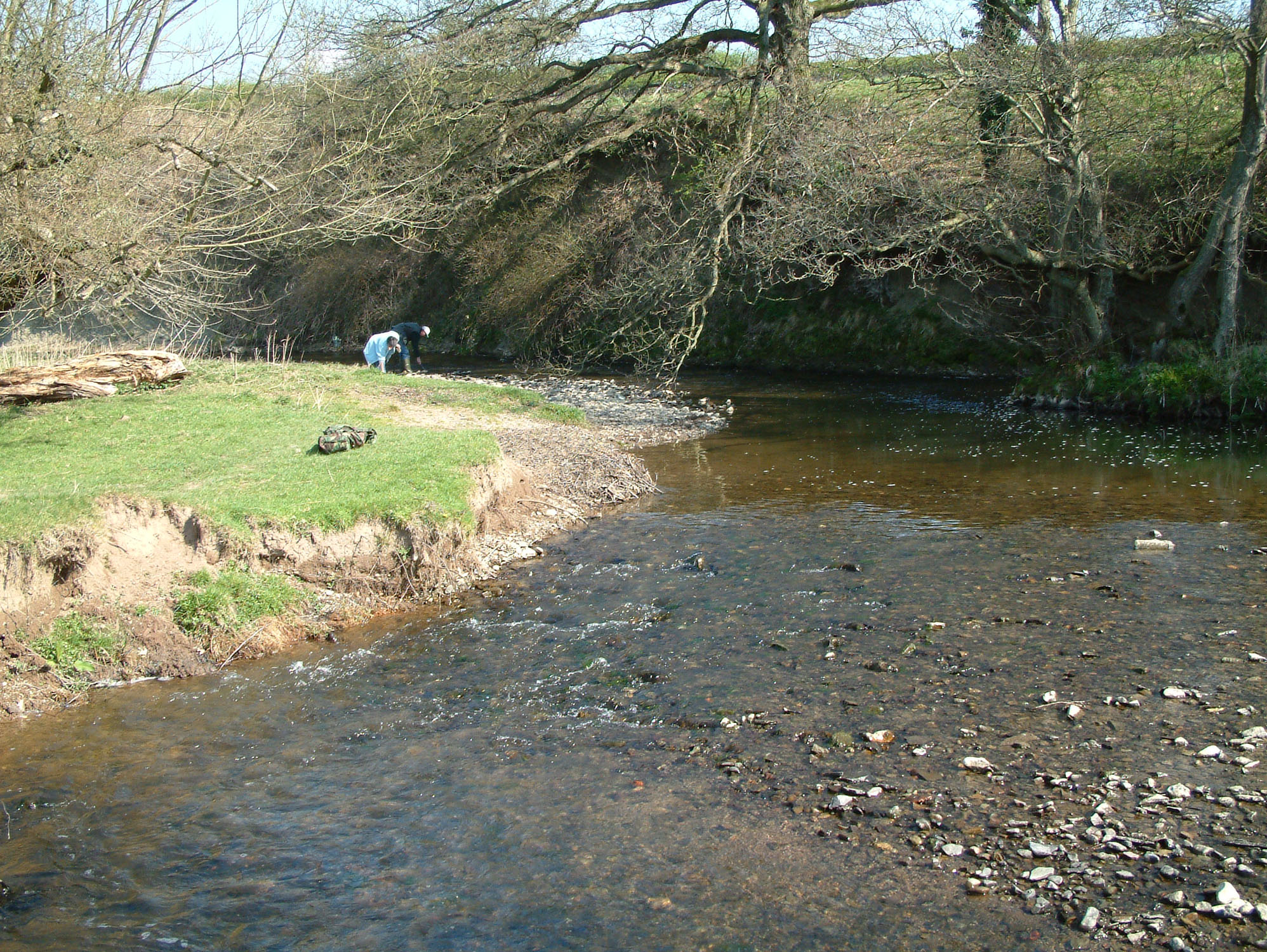 This is another walk along a designated geological route visiting two stream sections and two further cuttings, including an old railway cutting and a quarry. The rocks here are Silurian, Ordovician and Pre-Cambrian. Shells, graptolites and trilobites can all be found.

♦ Leave the A49, about 1.8km north of the Craven Arms. At a turning to Cheney Longville, there are two turnings to the village, the first avoiding the weak bridge. Ignore this one and turn down the second. You will pass over a railway bridge and, immediately on your right is a car park (GR 430845). Turn in and park here.
♦  STREAM SECTION 1. Leave by the stile opposite the car park and keep left through the cutting and ascend the old railway embankment. Continue through a gate and over a stile until you meet a signpost, where there is an embankment next to the stream. Go straight ahead, across the hummocky field, following the river to a stile, then a plank bridge and wooden steps across a footpath and another stile. You will see a footbridge over the river. Do not cross, but rather continue upstream for a further 330m. You will notice a small beached area with lots of rocks and a small cliff face on the other side of the river on the bank.
♦  STREAM SECTION 2. The next location is 90m upstream to a stile and then 180m to a ruined railway bridge. Walk along the railway track a further 90m to the stile in the fence across the track and 120m to the next fence and stile across the track. Beyond the stile you will see a boggy area in front of the cliff. Continue past it over another style and around the boggy area to a further stile giving entrance to the boggy area. Follow a track back left above the cliff, where you will find the Cheney Longville Flags exposed, or search below in the cliff face for trilobites.
♦  RAILWAY CUTTING. Go back over the stile, where you entered the boggy area, and continue 365m further west. You will see a footbridge over the river to your right and, on the left in the old railway cutting, are occasional exposures. Finds can be made on the ground and in scree from the small railway bank or in the river.
♦  THE OLD BRIDGE. Follow the path 230m west, and leave the railway track and a footbridge behind you. You will then pass a tall bridge with very high cliff faces. Search in the scree and rocks around the cutting.
♦  THE OLD QUARRY. Continue west along the main path, and you will leave the railway and footpath behind you on the right. There is a stile and gate to the old quarry, which can be seen on the left.
♦ Ref: 52.45510°N, 2.84136°W

Along the trail, you can find trilobites from the Silurian shales and brachiopods from the Ordovician rocks. These can be found in the riverbed at the first part of this walk. At the old cliff, trilobites and the trace fossil, Tentaculites sp (small screw like impressions) are quite common. Around the disused railway cutting area, Ordovician brachiopods (in particular Heterorthis alternata) are common, along with more Silurian and Ordovician fossils from the riverbed, similar to those that can be found in the first part of the walk.

At the second location, fossils can be collected from both the lower part of the cliff face in the boggy area or above, where a path leads back up over the top of the cliff. The best beds are those at the top, but trilobites can be collected from the lower cliff. The trace fossil, Tentaculites sp is quite common. All fossils are found in the sandstones and shales from the Ordovician flagstones. You need to examine different zones at different levels to find fossils, but once you find the right zones, they are usually packed with fossils.

The fourth location along the walk yields brachiopods and bivalves, but gastropods and trilobites can also be found. You will notice a small beach area full of rocks. There is a wide range of different rocks here washed down from the Stiperstones and the Long Mynd. Look for an angular black-coloured hard slate, as these rocks can contain trilobites from the Silurian shales. Also look out for Ordovician rocks packed full of brachiopods. Both types of fossils can be picked up either by walking in the river and collecting from the bed or by searching the rocks along the riverbank or the beach area (depending on the height of the river).

At the disused railway cutting, you can collect from two locations either in the river by searching for both Ordovician and Silurian fossils, or within rocks lying around. This is by far the most productive and, at most horizons, the rocks are packed with Ordovician brachiopods (in particular, Heterorthis alternata). The easiest way is to carry samples from the cutting back to the grass area and split the rocks. You may need preserving liquid on site, as the fossils are extremely fragile.

Ordovician sandstones continue to the bridge, where there are vast amounts of fallen rocks within scree slopes to search in. The high cliff faces often crumble to provide plenty to search in without the need to hammer the faces. Brachiopods and bivalves are common, but gastropods and trilobites can also be found. This site is a site of special scientific interest (SSSI), so hammering on the bed rock is not allows. You won’t find many fossils here, as the rocks are mostly Pre-Cambrian, but they are geologically very interesting to see. You may find the occasional rock full of brachiopods from the Ordovician grit, but these are now rare.

Most of the rocks along the trail are Ordovician from the Caradoc Stage. However, Silurian and other Ordovician rocks from both the Stiperstones and the Long Mynd quartzite ridges can be found in the riverbed along the trail. It is difficult to pinpoint the exact formations that these rocks come from. However, Silurian rocks from the Pentamerus Sandstone Formation and Purple Shales Formation can be found at the southeast part of the trail.
There is a lot of loose material in the form of river worn pebbles of various ages that have been brought down-stream. The SSSI covers the river and its banks. 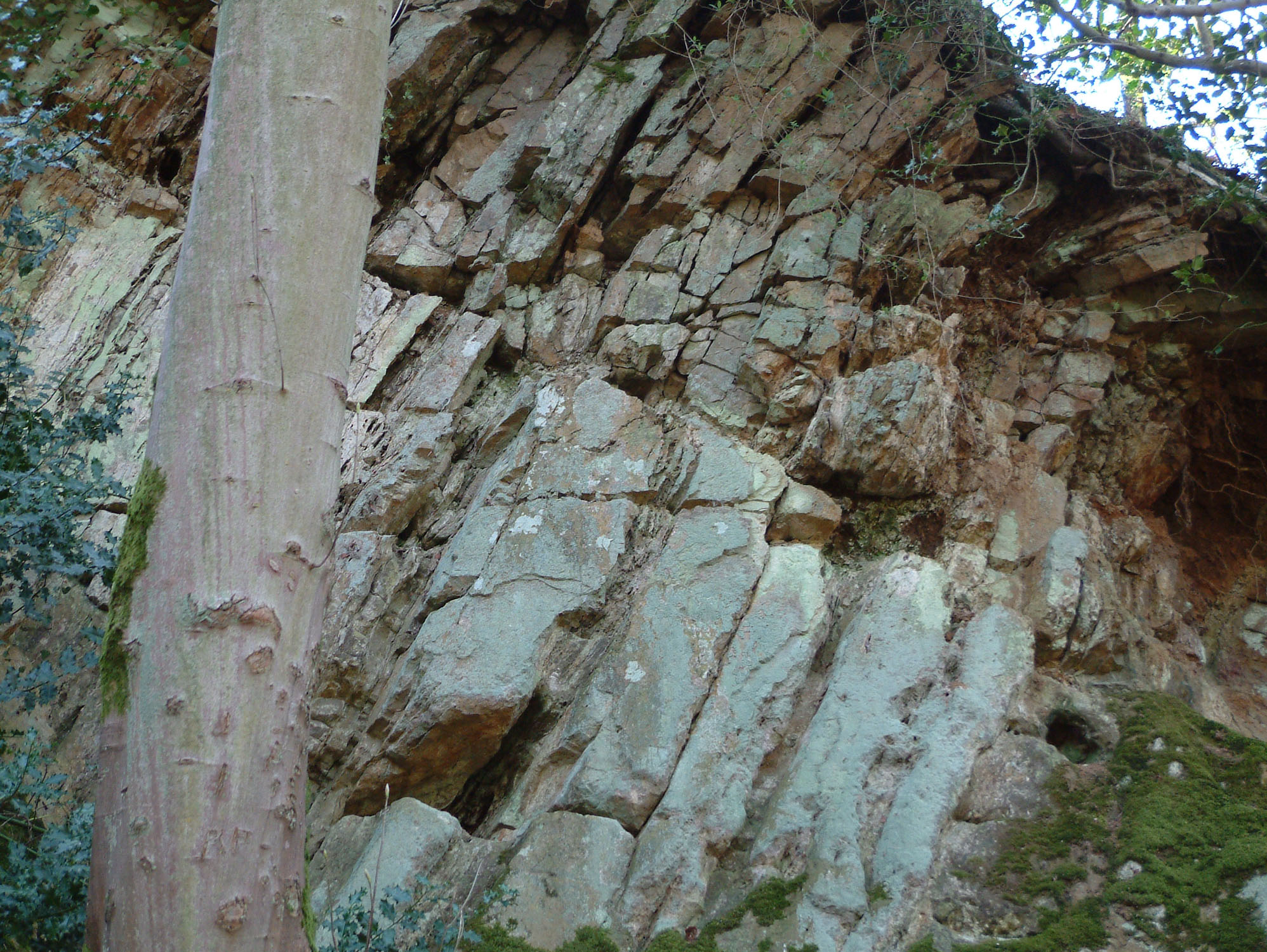 In particular, children should stay away from the river. The high cliff faces at the old bridge and quarry should be kept clear of. Collect from the rocks below.

These locations are quite a distance apart and it is highly recommended that you take hiking gear, a rucksack and good walking` boots etc. Also ensure that you have food and drink. In addition, a compass and GPS navigation device may come in handy. A hammer, chisel and eye protection should be taken, and maybe a small pick and wedging device if you can carry them. Take paper and good wrapping material as some fossils can be fragile. A pen, paper, labels and so on are a good idea so that you can record where you found the fossils.

This site is an SSSI. This means you can visit the site, but hammering the bedrock is not permitted. For full information about the reasons for the status of the site and restrictions please download the PDF from Natural England – SSSI Information – Onny Valley