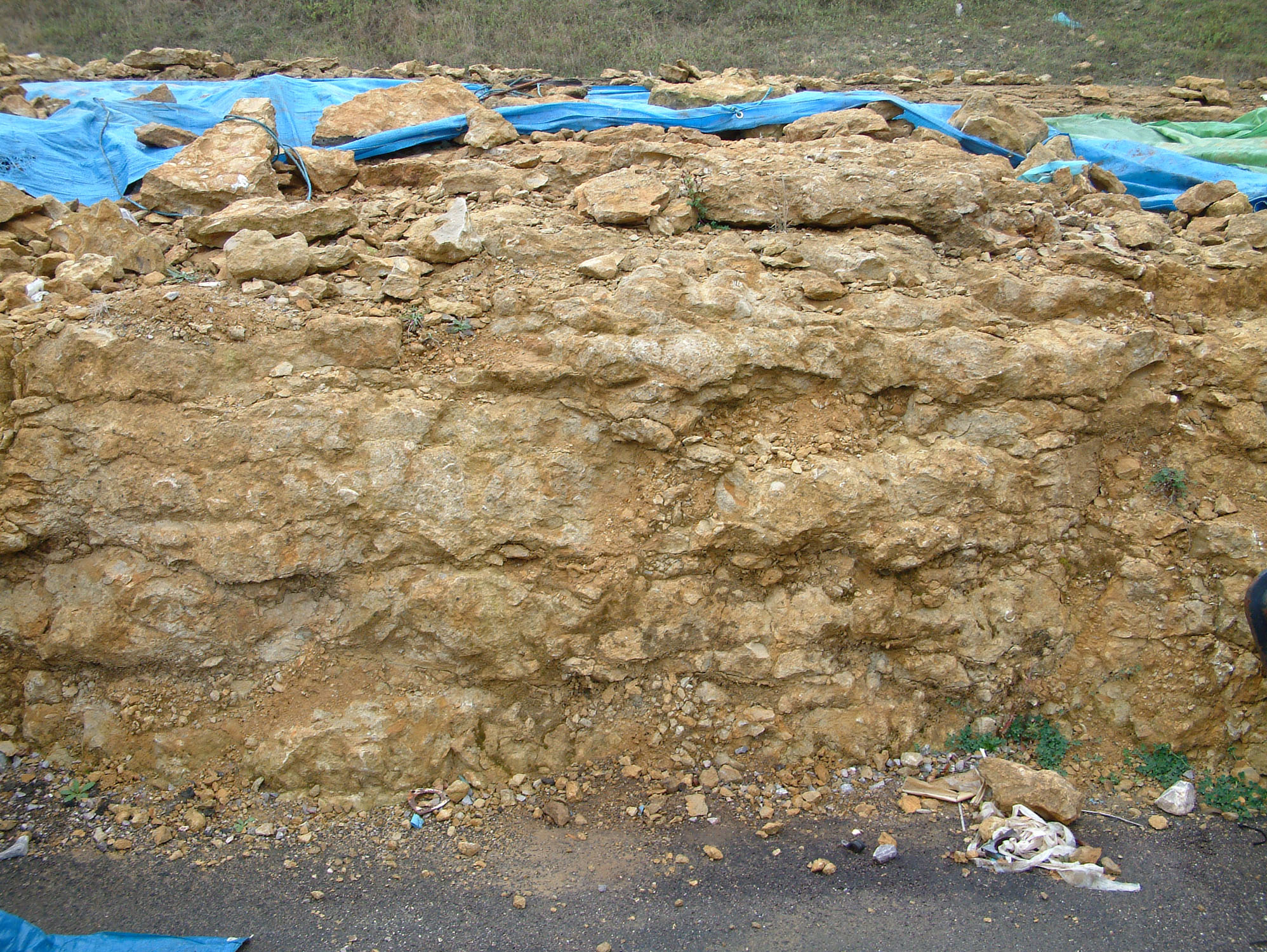 Although no longer accessible, Horn Park Quarry was one of the best locations for Inferior Oolite fossils. Today, you can view the once, productive beds as a much smaller outcrop but collecting is not permitted. Large ammonites, once common here, are confined to a relatively small inspection area. Nonetheless,  Horn Park has the most complete record of Aalenian ammonites anywhere in the country.’

♦ This location is now surrounded by security fencing (the fence and gates of the county’s smallest National Nature Reserve!) to protect the fossils and due to previous irresponsible collecting. Collecting from Horn Park is now strictly prohibited, without prior permission. However, visits can be arranged through the Beaminster Museum to see fossils laid down 174-168 million years ago in the Middle Jurassic period.
♦ Horn Park Quarry can be found between Broadwindsor and Beaminster, along the B3163.
♦ If travelling from Beaminster, about 1.5km after you leave the town, you will see Horn Park Farm on the right. Not far after this, you come to the old quarry, which is signposted as Horn Park Quarry Business Park.
♦ Ref: 50.81487°N, 2.77241°W

FIND FREQUENCY: ♦ – Fossils from Horn Park Quarry were once very common, with ammonites being extensively found . However, this is now a business park with only a small outcrop remaining and only a few ammonites can now be seen in this once very productive location. Access is banned, unless prior permission is given by Natural England or via Beaminster Museum.
CHILDREN: ♦ – Horn Park Quarry is a busy business park and is not suitable for children. It is also not suitable for anyone who only wants to find fossils but it is worth a visit for anyone interested in seeing the geology of an historic site.
ACCESS: ♦ – Access is only granted by Natural England or by contacting Beaminster Museum. This location is surrounded by security fencing to protect the fossils, due to previous irresponsible collecting. In addition, Horn Park Quarry is on privately owned land, so access is restricted.
TYPE: – Fossils can be seen in (but not collected from) the old outcrops on the sides of the quarry.

This is an SSSI from which no collecting is allowed. Due to previous irresponsible collecting, the site is now surrounded by a security fence to protect it. Visiting is strictly prohibited without the prior permission of Natural England or Beaminster Museum. It is also on privately owned land, so access is generally restricted.

However, Beaminster Museum’s gallery houses an impressive display of wall-mounted fossils and offers a tantalising glimpse into a warm shallow sea full of ammonites from this quarry. It also tells the story of Horn Park Quarry set against the basic background of changing sea levels and deposition of the Inferior Oolite Formation.

Although the smallest National Nature Reserve in the UK, it is an official World Reference site for stratigraphy and, therefore, protected. Visits can be arranged through the Museum to see fossils laid down 174-168 million years ago in the Middle Jurassic period. It includes the most complete Aalenian ammonite succession currently known in England, with examples from all four zones.

To visit the Quarry please contact the museum in advance at info@beaminstermuseum.co.uk. Small groups or family visits are welcome but  it is not possible to pop into the museum expecting a same day visit!

Horn Park Quarry was once a world famous fossil site, yielding hundreds of superb large ammonites from the Middle Jurassic Inferior Oolite when it was open. A university conducted a study of the site after a new owner wanted to purchase the site, and confirmed that there was a lot of “limestone” present at the site. The owner purchased the quarry and, a couple of years later, quarrying hit the Bridport Sands, which is actually a type of limestone, but economically worthless. Litigation by the owner against the university ended without success, since the university had been asked to confirm how much“limestone” was present and not what type of limestone.

Since the owner lost a great deal of money, he sold the quarry to become a business park. However, it is still an SSSI and some small outcrops can be seen with ammonites in them. The quarry area includes the most complete Aalenian ammonite succession currently known in England, with examples from all four zones.

Horn Park Quarry is now a business park and a lot of heavy vehicles use it. Therefore, ensure you are not in the way of traffic.

As collecting is not allowed, the only equipment you need is stout footwear and a camera to take pictures of the in situ fossils.

This site is an SSSI. This means you can visit the site, but hammering the bedrock is not permitted. For full information about the reasons for the status of the site and restrictions please download the PDF from Natural England – SSSI Information – Horn Park Quarry