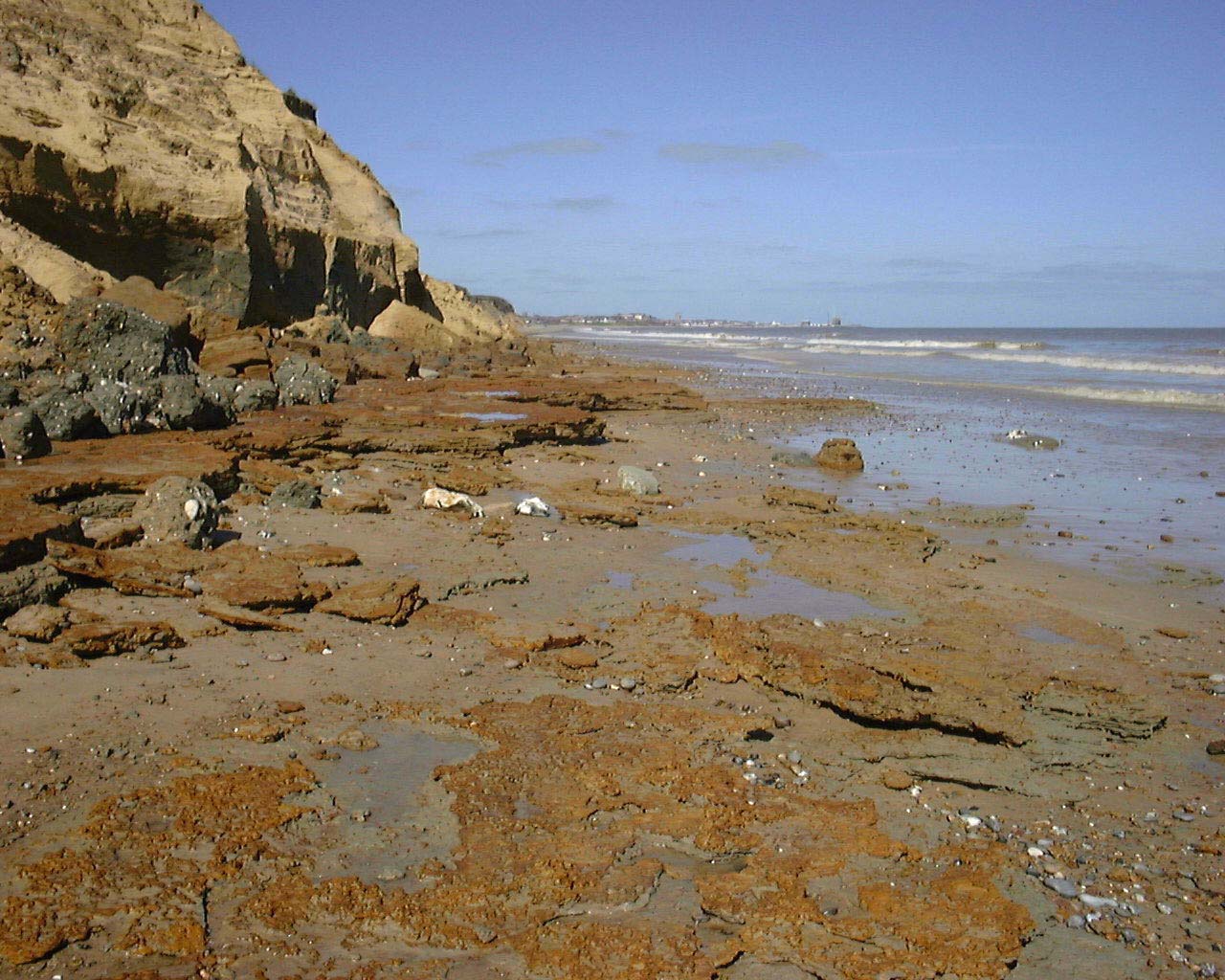 You can find almost anything, such as ammonites, shells, belemnites, reptiles (for example, ichthyosaurs), echinoids and more from the boulder clay; and mammalian and bird remains from the Forest Bed during scouring conditions.

♦ The most direct way to access Pakefield is from Kessingland. Park in the layby near some houses on the right coming from Lowestoft. It is not far from the roundabout. There is a footpath on the opposite side of the road down a Campsite South of the lay by. This will take you directly onto the beach down some steps. However, these are not always accessible due to rapid erosion.
♦ It is possible to access the beach down the landslips during the winter, but this can be very dangerous. It is also possible to cut across the fields from the Kessingland roundabout before the duel carriageway (from Lowestoft) or by walking from the beach at Kessingland, where there is a large car park.
♦ Should access be difficult using the above directions, an easier access to the beach (but a much longer walk) can be made by following the A12 heading from the south and, just after the 30mph sign after the last roundabout, turn off onto Arbor Lane. Follow this down to the beach and then walk south once on the beach. Access can be made through the holiday park for the most direct route, but they often clamp cars and hand out big fines if you park here.
♦  Ref: 52.42971°N, 1.72915°E

FIND FREQUENCY: ♦♦  – Pakefield during the late 1990s and early 2000’s was East Anglia’s premier location for collection fossils. There was much to find here. This location did rely on storms, heavy rain and beach scours, and with the right conditions, it was highly productive in mammalian remains from the Forest Bed and ammonites, reptile remains, shells, echinoids and more from the boulder clay. Sadly, since then the Kessingland beach has extended northwards and now the sea never reaches the cliffs. The beach is now overgrown with sand dunes.
CHILDREN: ♦♦♦♦♦ – This location is ideal for children, as fossils can be found on the foreshore. However, it is not suitable for children during winter high tides.
ACCESS: ♦♦♦ – There are several ways to access Pakefield (see above). The quickest and most direct route depends on whether the steps are present, as often during winter the sea sweeps them away and they have to be re-built in the spring. The second point of access is a long walk.
TYPE: – Fossils are mostly found on the foreshore, but can also be found in the cliff face and at the base of the cliff. Fossils from the Forest Bed are mostly below the usual beach level, so these will only be found on the foreshore. Ammonites and other Jurassic fossils from the boulder clay come from the top beds, which fall from the cliffs after heavy rain and high tides.

Blue silty beds of the forest bed occasionally yield mammal bones. These are more fragile and smaller than those from the gravel bed (see below). Smaller bones can also be found, but the bed often only yields fragments. Between the blue greyish silt from the Forest Bed and the reddish orange silt, there is a very thin layer packed with stones and gravel. Within this layer, many small mammal remains can be found, including in particular voles. It is best to wet sieve this layer.

A similar gravel layer can be found to the south of the above, where over 1.5m of blue clay is well exposed. This layer is below beach level and requires beach scouring. It is highly fossiliferous and contains a wide range of large mammal bones including rhinoceros, deer, boar, horse, whale and others. These can be very large and well preserved, but the layer is very rarely seen. During intense rainfall or high tides, boulder clay falls from the top of the cliff and this usually gets washed out on the foreshore, especially during scouring tides. Within this clay, many ichthyosaur bones have been found (mostly vertebras and paddle bones). Other reptile bones can be found, including from crocodiles.

Ammonites can be collected from the foreshore, which have been brought here in the boulder clay. It is best to collect from the foreshore when the clay is being washed out and, you have more chance of finding fossils. The clay contains many erratics, including Lower, Middle and Upper Chalk, Kimmeridge Clay and occasionally highly fossiliferous oolite similar to that of Yorkshire. In the chalk, echinoids and brachiopods can also sometimes be found. Within the clay, occasional blue-grey nodules or pale yellow nodules can be found, which can contain ammonites, shells and bones. You will need a heavy hammer to split these. There are also some dark red rocks in which ammonites can also be found, but these are poorly preserved.

Below this, glacial sands and till make up roughly half of the formations. These beds are unfossilferous and made up of very fine sands. They are from a time when there were very cold conditions during the Ice Age and when sea levels rose, depositing a sequence of mostly shallow marine sands and gravels..

Directly below the sands, the Lowestoft Formation, a glacial till of the Anglian Stage is present but is unfossiliferous. This solid-looking grey clay, containing chalk pebbles, is a till, laid down beneath a massive ice sheet during the Anglian glaciation about 450,000 years ago. The Lowestoft Formation is a major component of the geology of Suffolk.

Under the glacial sands and till, the Cromer Forest-bed Formation begins and is similar to that found at Cromer. The laminated silty clays make up roughly 0.8m of the Forest Bed. Glaciation has cut through this bed at the middle-north end of Pakefield. The laminated silty organic muds lie directly under the sands and till. However, at the middle-south end, this bed is missing and, instead, the Rootlet Bed is directly below.

The Rootlet Bed of the famous Cromer Forest-bed Formation, is named after deposits of roughly the same age found in north Norfolk. It tells a story of life on the forested floodplain of a big river during one of the warm periods of the Pleistocene Ice Age. The river was huge, and probably drained much of central England. The mud is compacted, organic-rich sediment containing plant and animal fossil evidence of life in conditions very similar to southern Europe today. Animals included familiar species such as wild boar, fallow deer, hippopotamus, lion and spotted hyena; extinct animals included straight tusked elephant, giant beaver and sabre-toothed cat. We can also add early humans to the fauna

Finds of human flint tools at Pakefield were the earliest recorded human activity in northern Europe. These included worked flakes and choppers made of black flint. They were found in the Rootlet Bed and overlying river gravel known as the Unio Bed, named after the mussel shells found in it. The thin Unio Bed also contains small vertebrates.

Below the Rootlet Bed, the Ferruginous Bed is a red-brown sand and gravel bed, which has been measured as 2m thick, but could be much thicker.

The south end of Pakefield was not washed out or scoured until 2002. For this reason, not much is known about the remainder of the Forest Bed and nor has research been carried out. However, it is packed with the remains of large mammals and is highly fossiliferous. The bones are very well preserved and are a reddish colour. They have been recorded from the top of this bed and, during 2002, from the lower part. The red-brown, ferruginous sand and gravel continues to the south end of Pakefield. Below this is a series of layers, alternating blue and red, which are similar to the Rootlet Bed followed by a grey layer full of fossil wood. This layer is far more compacted with wood compared to that of the laminated silty layers of organic mud. The bed is approximately half a metre thick and it darkens with depth. The lowest part of this bed is a very dark grey. Below this layer is yet another area that has not been identified. It is a second bed similar to the red-brown sand and gravel and has yielded mammal bones (including an antler and deer jaw).

Common sense when collecting at all locations should be used and knowledge of tide times is essential. The main issue to be aware of is that, during scouring and exceptional high tides, you can easily get cut off. Be careful of cliff falls and do not climb the cliffs, because, after persistent or heavy rain, you may get stuck in the wet clay.

Apart from good eyes and a high tide or scour, a pick is the best tool to take along with a knife and spade to dig any bones out of the cliff or foreshore. The bones are fragile, so should be cleaned and treated as soon as possible.