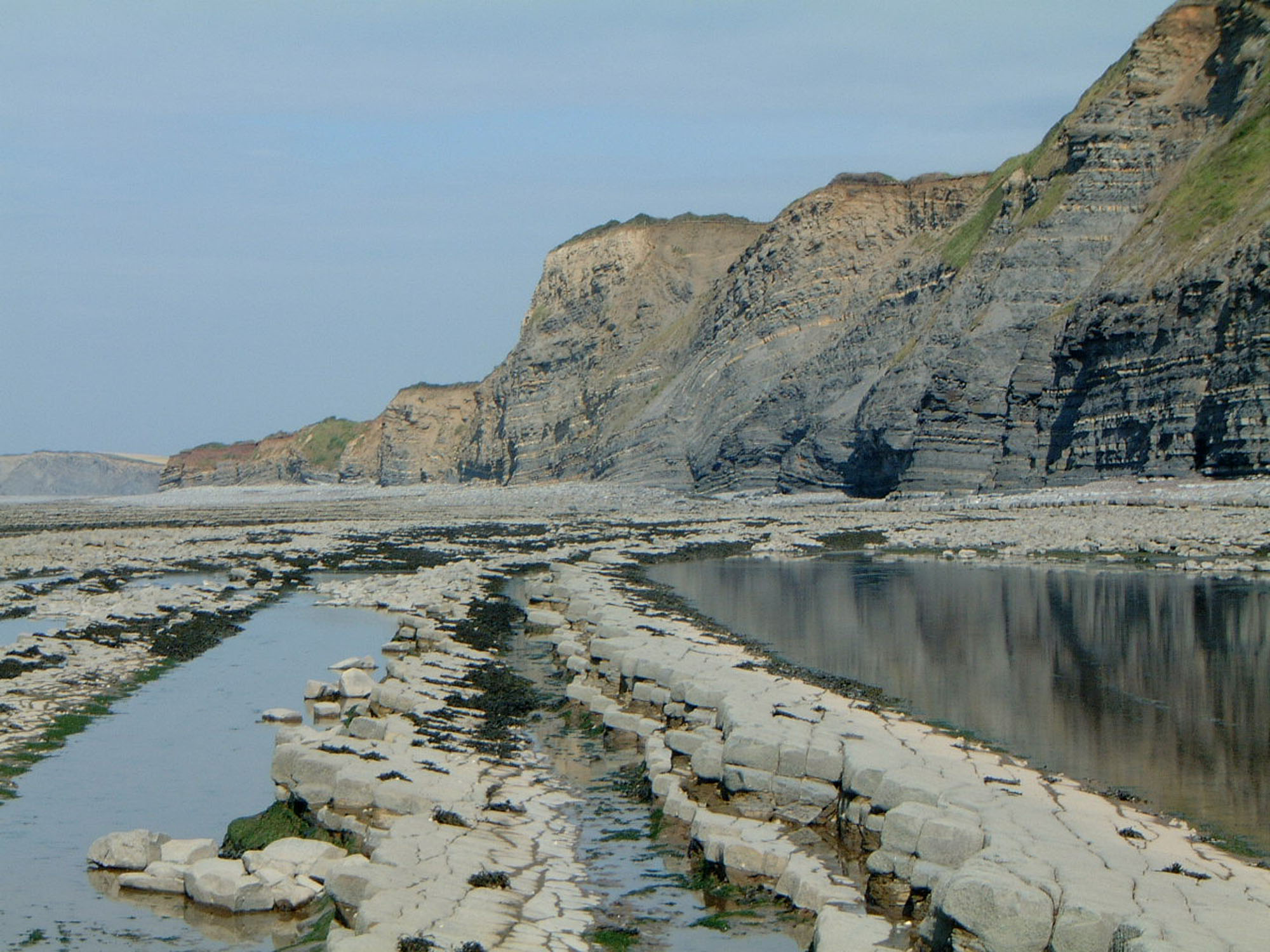 Quiet, peaceful and tranquil, Quantoxhead has several kilometres of tall Jurassic cliffs and a very long wave-cut platform. Many fossils, including some superb ammonites and reptile remains, can be found on this platform. There are also plenty of rock pools for the kids.

♦ Quantoxhead is quite difficult to find. It is best to follow the A39 to East Quantoxhead and turn up Frog Street.
♦ Follow this road until you get to the church. There is a large pond with ducks here and, on the opposite side of the road, is a church car park. The church is quite happy for you to park here, but you should make a small donation in the donation box. It is then a long walk until you reach the steps leading onto the beach.
♦ Ref: 51.19144°N, 3.23692°W

FIND FREQUENCY: ♦♦♦♦♦ – Quantoxhead is highly productive for fossils, especially for reptile remains and large ammonites. Shells and fish remains can also be found.
CHILDREN: ♦♦♦♦ – This location is suitable for families, as there is lots for the kids to do, including plenty of huge rock pools to explore, which are full of sea life. There are also lots of fossils to be picked up off the foreshore. However, keep children well away from the base of the cliff.
ACCESS: ♦♦♦ – Access to Quantoxhead beach is fairly easy, but the location itself can be difficult to find without a map. You should head to East Quantoxhead.
TYPE: – This is a foreshore location. Fossils are found exposed on the foreshore within the rocks, or exposed in wave-cut platforms.

Bones of ichthyosaurs and plesiosaurus are the most common reptile finds, but other reptiles have been recorded at this location. Fish remains can also be found. There are also many different species of ammonite at Quantoxhead and one species of nautilus. Belemnites are much less common, but can still be found. Over 20 different species of bivalve can be found at Quantoxhead and a number of brachiopods. Trace fossils, including the burrows of bivalves, can be found along with the occasional echinoid spines. Crinoids are also very common, but tend to be mostly small broken fragments, found within the shale.

The poor quality photo below shows a nautilus in a bolder from a cliff fall. The actual size was around 500cm in diameter and it was in perfect condition. However, the nodule was too large to lift.

There are two different interesting sections at Quantoxhead, but it is an extremely long walk to get to them. Reptile remains can be found in the soft foreshore shales. This generally starts about 2km west from the steps and the bones can often be found in the same layer as the crinoid fragments, where fish fragments can also be found. If nodules are present within the same zone, occasionally bones can be found within these, which are extremely well preserved. Moving west, you start to get a number of ammonite impressions in the foreshore rocks, increasing in size as you walk further west. With a fresh cliff fall, ammonites tend to become loose from their nodules and can be found on the beach. They can also be found in nodules throughout the Quantoxhead area, especially within the hard limestone layers.

Over 60m of Lower Lias clays and limestone is present at West Quantoxhead, which dip eastwards. The Lias is similar to that at Church Cliff at Lyme Regis in Dorset. In Somerset, they are known as the Quantock Beds and are 20m thick.

The major faults along this part of the coastline can clearly be seen, especially with the hard limestone blocks on the foreshore, which, in some cases, form stepped circles and are almost hard to believe that they have been made naturally by the sea.

Common sense when collecting at all locations should be used and knowledge of tide times is essential. You can easily be cut off at Quantoxhead by the tide as the sea always reaches parts of the cliff,

Quantoxhead covers a huge area and there is lots of walking to be done. The rocks are actually much less fossiliferous than other Lower Lias locations, but the huge area makes finds just as frequent.

This site is an SSSI. This means you can visit the site, but hammering the bedrock is not permitted. For full information about the reasons for the status of the site and restrictions please download the PDF from Natural England – SSSI Information