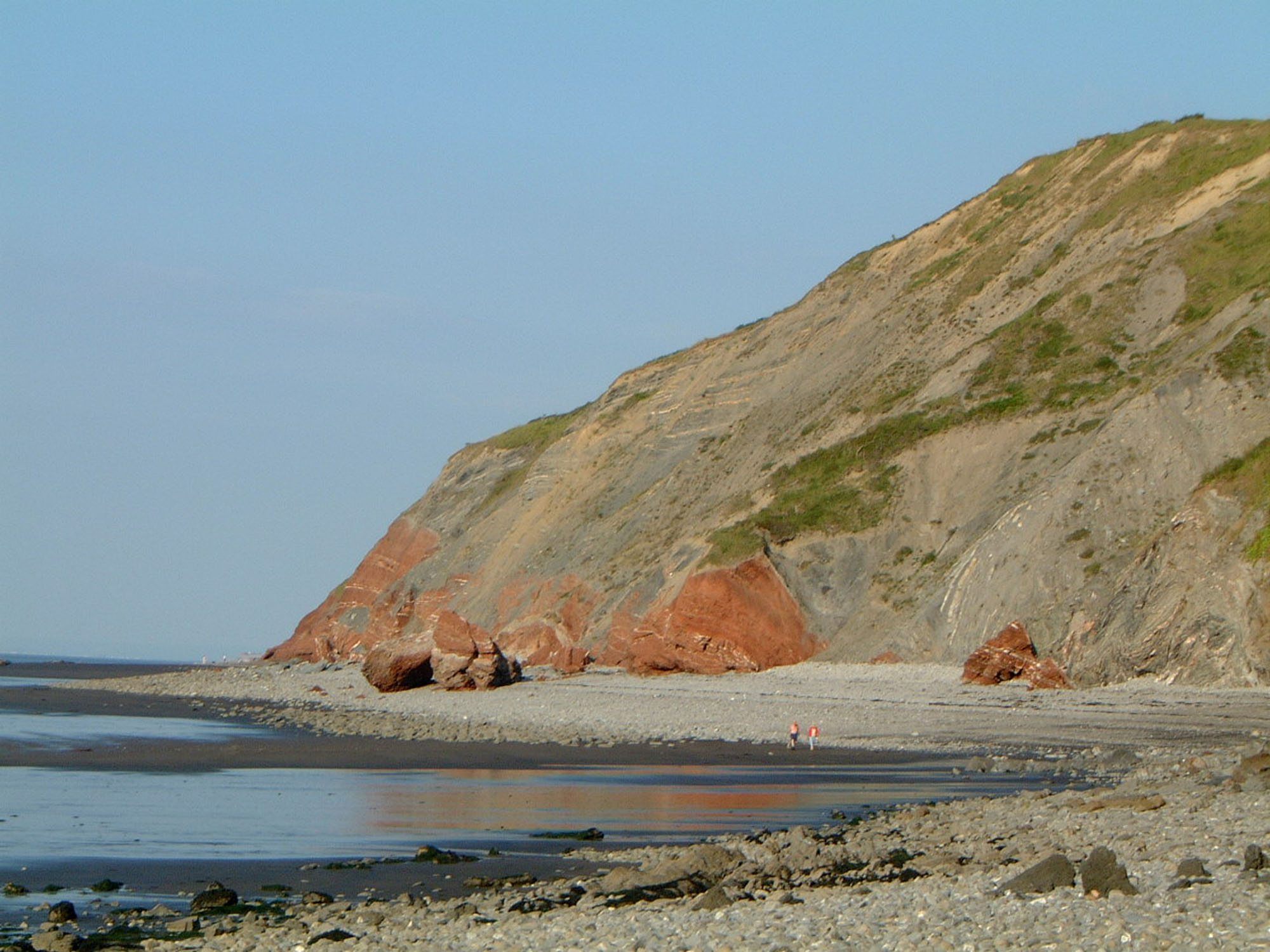 Watchet is rich in reptile remains and ammonites are also common. There are also some spectacular faults, which can be seen along with fossil casts of giant ammonites on the foreshore. This is a must-visit location for anyone in the area who is into fossils.

♦ There is a car park near the small museum in the centre of Watchet, next to the harbour. The museum contains examples of locally found fossils (including an ichthyosaur skeleton) and books illustrating the fossils and strata of the area.
♦ Take the narrow footpath running next to the steam railway line (with the sea on your left hand side) and follow it up onto the cliff top. After a pleasant walk (of about half a kilometre), you reach a long set of steps onto the beach (with a good handrail).
♦ Once on the beach, head away from the lighthouse The rocks around the lighthouse are all Triassic and unfossiliferous.
♦ Alternatively, you can drive out of Watchet to the west on the B3191. Follow this road up and around the steep hill and then down again.
♦ On a fairly straight part of the road, you will see a campsite on your right. Go through the car park to the bottom of the hill. Park here and walk down the slope, walking west once on the beach.
♦ Ref: 51.18281°N, 3.35444°W

FIND FREQUENCY: ♦♦♦♦♦ – Watchet is very productive, but the best time to collect is during scouring conditions on the foreshore. Many reptile remains can be collected just west of Warren Bay.
CHILDREN: ♦♦♦♦♦ – This location is suitable for family trips and for young children, as fossils can be found on the foreshore.
ACCESS: ♦♦♦ – Access to the beach at Watchet can be achieved usually by parking in the town and walking from Watchet Harbour along the beach. However, if you want a more direct route, head for Warren Bay Campsite, just outside Watchet and park there. Follow the footpath directly to Warren Bay.
TYPE: – Watchet is a foreshore and cliff location, so fossils can be found in both. However, the vast majority are found in rocks on the foreshore or exposed during scouring tides.

Watchet is a bit of an unpredictable location. Sometimes, you can come away with nothing and other times buckets full. Much depends on beach conditions, but always take the right tools. It is also a good location for collecting bones from plesiosaurs and ichthyosaurs, although fresh cliff falls are often required. The bone in the photo was found in a bolder on the foreshore.

Bivalves, including scallop shells, oysters and Gryphaea are also common at Watchet and crinoid slabs are common around Warren Bay. Many ammonites can be found, although they are mainly broken, unless you are lucky enough to arrive after a fresh cliff fall. They can be found scattered on the foreshore, but are usually just fragments. However, occasionally, you will get an ammonite in a small nodule or, if lucky, a complete ammonite that has fallen out of its nodule.

The second prime location for ammonites is at the location from where most of the bones are found, that is, past the major fault which has been undercut by the sea where the Lias starts again. Ammonites are also often found in the fine shingle heading towards Blue Anchor. The rock (shale) in the bottom layer is extremely soft and wet, and fractures into fine sheets when stressed. In some areas, this shale contains imprints of ammonites (up to 30cm in diameter). A number of small whole and sections of larger pearly ammonites can also be found from this layer scattered around on the rock platforms.

Rocks from the Triassic Blue Anchor bone bed can also be found, which contain fish, reptile and shark remains. There are two main locations where bones can be found, although, generally, they can be found anywhere on the foreshore. The first is from the foreshore where the entrance to the camp site is, stretching west, until you reach the red Triassic beds. The second is when you reach the massive fault that the sea always reaches (which is notable for the algae and overhangs). Beyond this point, the Lias begins again just before Blue Anchor. This is the main location from where bones are found. The bones come from the top part of the cliff, and they often fall and can be picked up from the foreshore.

Between Warren Bay and Blue Anchor, there is a large Triassic rock in the middle of the foreshore. If you search along the foreshore around this area, crinoid slabs can be found. The yellowish limestone blocks surrounding the steps originate from the cliff and are rich in a variety of bivalves, including scallop shells, oysters and Gryphaea. The rock is quite hard but, if you search the foreshore around the blocks, you can find well preserved shells, especially oysters and Gryphaea buried in the sand.

Rock platforms extend along most of the foreshore. At certain times of the year, they become buried in sand and/or mud deposits and can be difficult to access.

At very low tides, searching the mud at the waterline can yield some excellently preserved specimens. Local reports have included instances of finding whole crinoids (although these do not appear to feature in the rocks further along the foreshore).

Ammonites are also often found within the fine shingle heading towards Blue Anchor. In many places the rock platforms contain two quite distinct rock layers. While it is difficult to extract fossils from the very soft shale due to its texture, the white ammonites can be extracted by carefully using a chisel to split off sheets of rock. (Fossils need to be placed into a protective container. As specimens dry, they tend to split from the surrounding rock and crumble. Slow the drying process by keeping the fossils wrapped in plastic with small air holes for several weeks seems to work well.)

The rock in the top layer of the photograph showing the bedding structure lacks fine bedding planes and is much easier to handle. In some areas, it contains white ammonites or imprints of them.

Watchet has very interesting geology. There are many major faults at Watchet, which can be seen in the two photos.

The cliffs west of Watchet are made up of the Keuper Marl beds of the Triassic. To the east, the beds fault, revealing the Lower Lias beds. There is well over 150m of beds extending up to the semicostatum zone. About 12m of limestones and shales containing with Psiloceras planorbis are succeeded by a thick sequence of shales with a few thin limestones.

As you continue walking west, major faulting changes the formation back to Triassic.

Common sense when collecting at all locations should be used and knowledge of tide times is essential. You can easily be cut off by the tide as the sea always reaches parts of the cliff, especially if walking from the harbour at Watchet or from Blue Anchor. The tide comes in very high at these two locations.

In addition, the foreshore at Watchet is subject to periodic thick mud deposits, which submerge much of the rock platforms and render the foreshore quite dangerous to walk on. Warning signs are posted when relevant at the top of the cliff path.

This site is an SSSI. This means you can visit the site, but hammering the bedrock is not permitted. For full information about the reasons for the status of the site and restrictions please download the PDF from Natural England – SSSI Information