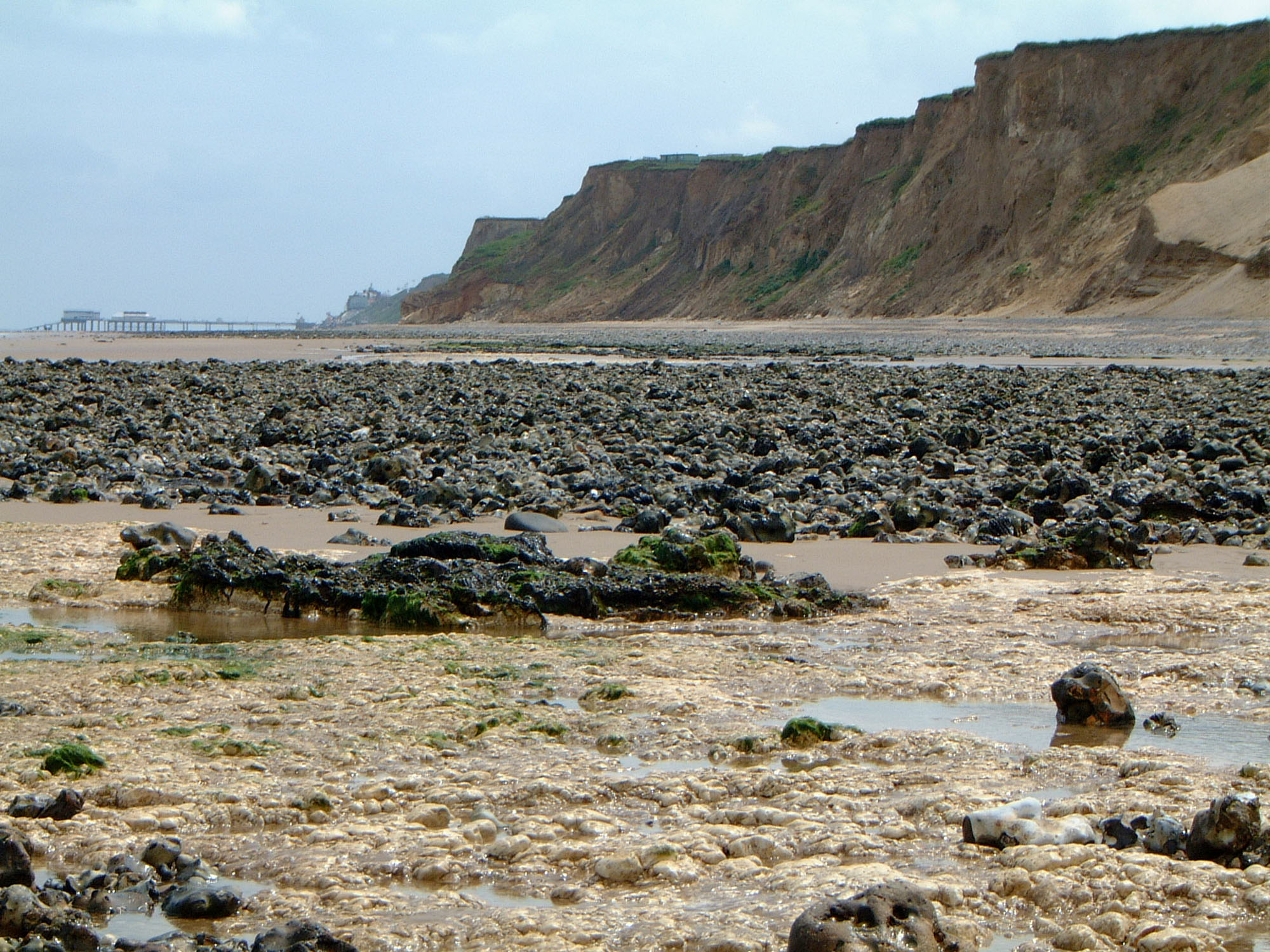 This is the location of the famous ‘West Runton Elephant’ find. From the West Runton Fresh Water Bed, mammal and fish remains are common, along with freshwater shells. On the foreshore, during scouring tides, the chalk yields echinoids and sponges.

♦ West Runton is located to the west of Cromer on the northern Norfolk coast and is a small village. Driving through the village, you will pass some caravan sites and then a road sign leading to the beach. There is a small corner shop near the entrance to the road. Follow the road all the way down and, on the left, you will come to a car park.
♦  In summer, parking fees apply at a toll gate, but, during the off peak season, tickets are issued from the cafe. Toilets and the cafe are also next to the beach. Once on the beach, you need to walk east and it isn’t very far until you get to the beds (providing they are exposed).
♦  The best chalk section, including the Micraster Bed, is just west of the road on the shore. During scouring tides, the entire foreshore is exposed with chalk.
♦ Ref: 52.94173°N, 1.25137°E

The Forest Bed is rich in fossils. There is a large number of different freshwater shells to be collected, together with fossil seeds, and fish, birds, frogs and mammal remains. The mammal remains from this bed can be anything from beavers to vole and even elephants, deer and hippopotamus. So many different mammals have been recorded from this bed that you never know what you may find. On the foreshore, the chalk yields superb corals, sponges and echinoids. Bivalves can also be found. Between the Fresh Water Forest Bed and the chalk, the Wroxham Crag also yields mammal and fish remains, and anything from deer to mammoth and whale remains have been found.

The best time to collect fossils at West Runton is after high tides, heavy rainfall and scouring conditions. Fossils are exposed on the Forest Bed surface, which can easily be seen and collected from. After a very high tide and during scouring conditions, mammal remains are often found. However, even if the conditions are not favourable, with a small knife or pick, you can very gently break apart the loose material at the base of the cliff section to make finds. On the foreshore, fossils from the chalk and Wroxham Crag can be found. Search carefully around the chalk exposures and in the areas of heavy-iron coloured cemented pebbles (that is, the Wroxham Crag).

West Runton beach is most famous for the elephant or steppe mammoth, Mammuthus trogontherii, which was discovered in 1990 and is one of the oldest and best preserved fossil elephants ever found in the UK. Deposits of bone and teeth can still be collected from this bed, but, being a SSSI, it should not be dug into and it is better to collect from the beach, unless something is obviously exposed at the surface.

The world-famous Upper Freshwater Bed is well exposed at the base of the cliff. These and the underlying sands, gravels and estuarine silts (Pastonian Stage) comprise the Cromer Forest-bed Formation, which can be exposed in the cliffs during scouring tides and rough weather.

The geology of the section between West and East Runton is complex. The beach itself is composed of flint, which sits on top of a Cretaceous Chalk wave-cut platform, with various erratics, which were deposited by Ice Age glaciers.

The Cromer Stone Bed and Wroxham Crag are often cemented together by calcrete and iron pan and are exposed during heavy tidal scouring conditions. The shelly sands, grey silts and conglomerates have produced a rich fauna, including voles, shrews, giant beaver, deer, elephant and it is significantly older than the West Runton Freshwater Bed.

Overlying the Wroxham Crag is the West Runton Freshwater Bed; a prominent dark ‘peaty’ bed at the base of the cliff and up to 2 m thick. It is highly fossiliferous and contains the remains of plants and trees (seeds, cones, fungi and pollen), terrestrial and aquatic molluscs, fish (scales, teeth and bones), amphibians, large and small mammals (teeth and bones) and bird bones.

Common sense when collecting at all locations should be used and knowledge of tide times is essential. The main issue at West Runton to consider is the tide if visiting the chalk past the headland. This is the main place where you can be cut off by the tide.

The West Runton Freshwater-bed is protected by SSSI rules, so digging and removing samples is not permitted, but the use of small tools, such as a knife or small pick to remove any fossils is. Collecting from the foreshore chalk is less restricted, but a knife or pick is still the best tool for removing fossils. Remember to bring specimen boxes to ensure your fragile specimens make it safely back home.