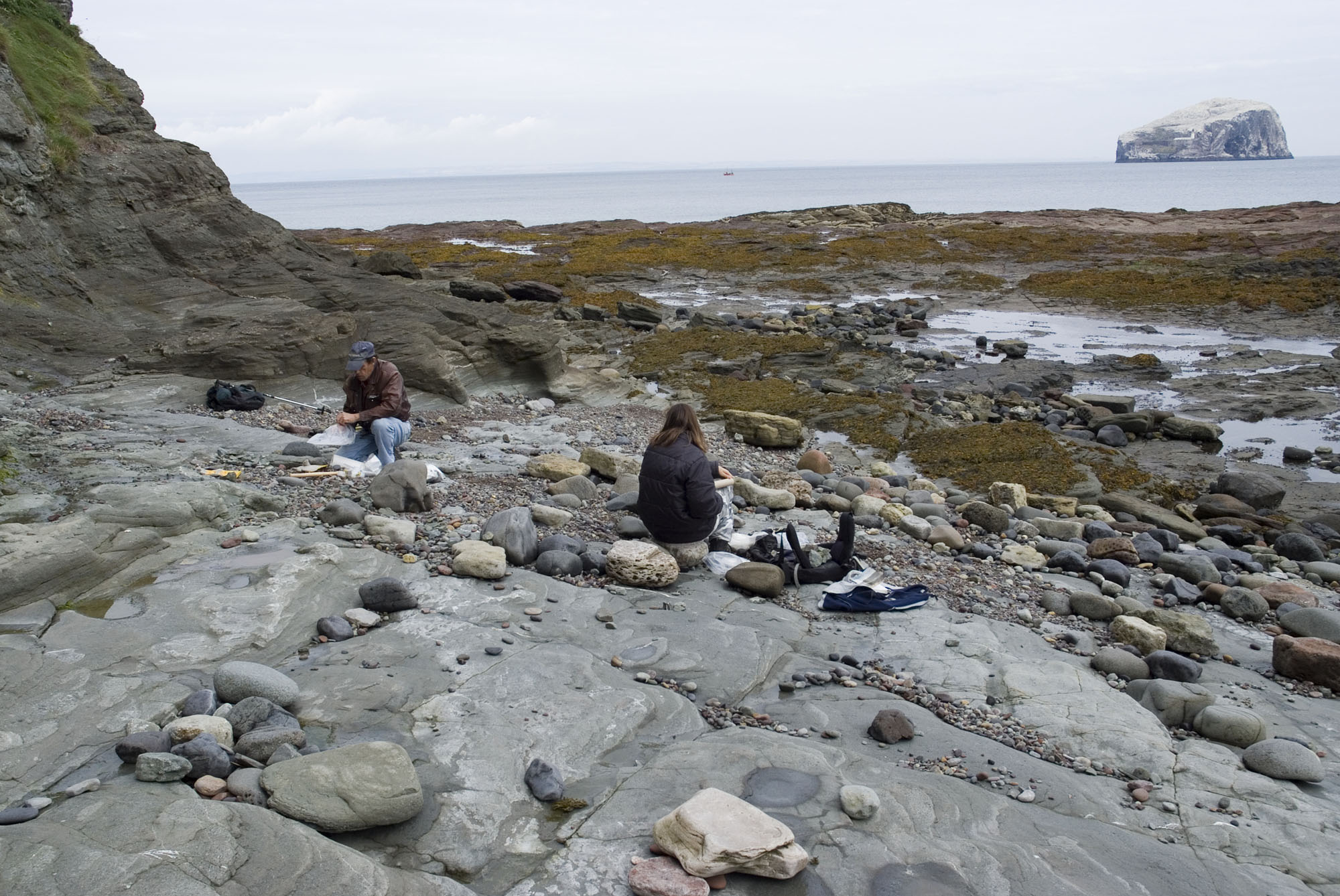 The rocks at North Berwick are volcanic tuffs, but cementstones within a small zone of tuff contain fish remains and 23 species of pteridosperms and lycopods.

♦ From North Berwick, follow the A198 to Auldharne. There is a private toll-road leading to the beach just past the village. Follow this, which will take you down to the shore where there is plenty of parking.
♦ From the car park, walk west past the first bay and round the headland. Here, a rocky bay with a castle at the western end can be seen. In the middle of the bay, you will find the volcanic tuff.♦ Ref: 56.05411°N, 2.64747°W

FIND FREQUENCY: ♦♦ – Only a small area yields fossils at North Berwick. This consists of just a few meters of cliff, with a 10cm band running through the volcanic tuff containing the cementstones. Once you find the band, it can be quite productive. The problem is the area has been over collected.
CHILDREN: ♦♦ – This location is not suitable for families, as the foreshore is too rocky.
ACCESS: ♦♦♦ – A private car park takes you onto the beach and from here it is a short walk. The car park has a toll.
TYPE: – Fossils at North Berwick can be found within the cliff.

The most common finds at North Berwick are fish fragments. However, within the cementstones, 23 different species of pteridosperms and lycopods have also been found.
Oxroad Bay is very rocky, but, in the middle of the bay where it is less rocky, green volcanic tuff can be seen in the cliff. You will also see a layer of cementstones, which are extremely hard. These weather to a yellow colour, but you will need to look hard to find them. Split these cementstones to find fossil fish inside.

The cliffs at North Berwick are Carboniferous in age, but are actually volcanic, mostly comprised of Garleton Hills Volcanic Formation, an igneous bedrock formed 326 to 345 Mya and Yellow Crag Plantation Vent, a tuff and agglomerate formed 326 to 359 Mya.

As a result, the vast majority are unfossiliferous. In the middle of Oxroad Bay, the Garleton Hills Volcanic Formation cliffs consist of fine, agglomerate green volcanic tuff. The yellow-weathered cementstone bands contain fish remains and pteridosperms.

Towards the east of the bay, near the castle, the Yellow Crag Plantation Vent agglomerate crops out. Red-bedded tuffs with blocks of large basanite boulders can be seen on the foreshore, which are now outside of the vent.

Common sense when collecting at all locations should always be used and prior knowledge of tide times is essential. You can get easily cut off by the tide here. The shore is also very rocky, so extra care should be taken.

The cementstones are extremely hard and you will need a crack hammer and safety glasses to split these stones.