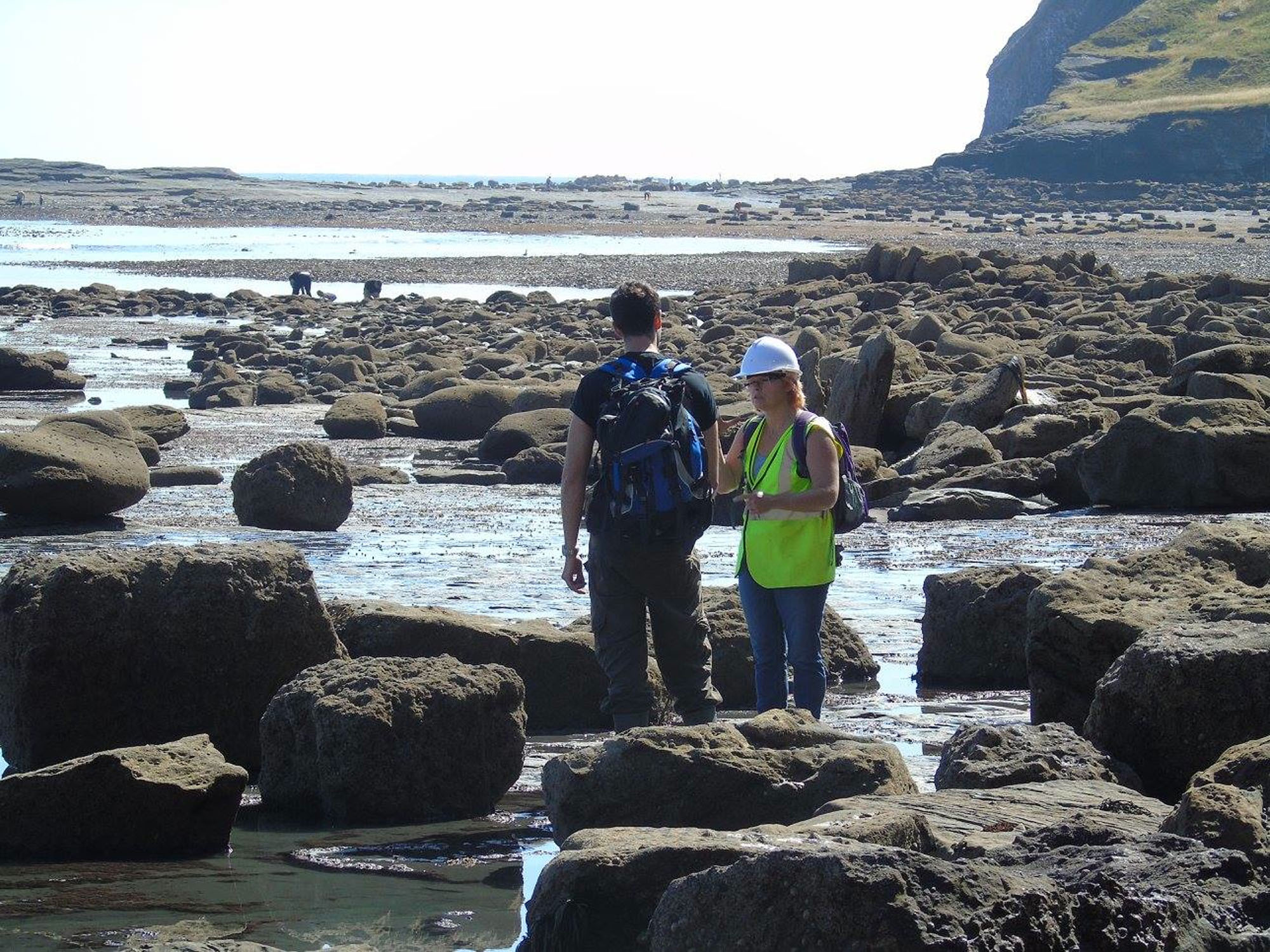 Saltwick Bay yields many ammonites, reptiles and shells, and is also famous for jet, which is a type of lignite and considered to be a minor gemstone and popular for jewellery. Ammonites are often found in nodules, which are easy to split and found along the foreshore.

♦ Take the coastal road from Saltwick Bay Abbey. Not far after the abbey, there is a caravan park signposted ‘Holiday Park’.
♦ Drive down this lane until you reach the wooden barriers. Park here and there are steps down to the foreshore.
♦ Ref: 54.48456, -0.58897

FIND FREQUENCY: ♦♦♦♦♦ – Saltwick Bay yields excellent ammonite specimens and dinosaur/reptile remains, but there is also quite a lot of competition. Plant remains can sometimes be found, if there have been rock falls from the top of the cliffs have brought blocks of the Whitby Plant Bed. The best time to collect is during the winter storms, or scouring conditions.
CHILDREN: ♦ – Due to dangerous accessibility of this location, young children should not visit this site.
ACCESS: ♦♦♦ – You can park at the top of the cliff and there is a long way down to the beach by steps. These can be very slippery after rain and during the winter months.There is a small store and a snack bar. The descent to the beach is a bit arduous!
TYPE: – Most fossils can be found on the foreshore, especially after storms or scouring conditions, in nodules or loose in areas of shingle and shale. However, fossils are also commonly found fallen out of the cliff and on the scree slopes, either in nodules or loose.

Like so many coastal locations, fossil collecting at Saltwick Bay is best conducted along the foreshore. Look between rocks and boulders for ammonite nodules, which can be broken with a geological hammer, to reveal beautiful ammonite specimens, particularly Dactylioceras and Hildoceras. Look for nodules with sings of an ammonites, which often have the sides showing around the edges of the nodule. Nodules can often be found trapped under rocks.

The nodules are common enough and fall from the Alum Shale Member above. The bivalves Dacryomya ovum and Pleuromya sp. are a common ﬁnd, along with belemnites. The long thin ones (Cuspiteuthis tubularis) can be found on the surface of the shale near to Black Nab at Saltwick Bay.

Plant remains are quite common in the Whitby and Scarborough areas and Saltwick Bay is no exception. The Dogger Group of ﬁne-­grained sandstones reaches down to beach level here and the Whitby Plant bed reveals leaves, usually preserved as carbon impressions of the original leaf. Tree trunks and branches are sometimes preserved as ﬂattened coal like bands, sometimes as mineralised casts and occasionally as Jet. Collecting fossils at Saltwick Bay can be very dangerous. The cliﬀs are constantly losing pieces from small ﬂakes of shale to massive boulders of sandstone.

The geology at Saltwick Bay is Jurassic, including rocks from the Alum Shale Member, with the overlying Dogger Group and the Saltwick Formation. These are the Ravenscar Group and are from the Bajocian (170 to 177Mya), the Aalenian (177 to 180.1Mya).

Common sense when collecting at all locations should be used and knowledge of tide times is essential. It is very easy to get cut off at Saltwick Bay, as the sea always reaches the base of the cliff. You should ensure you return before the tide turns. Also be aware of sticky areas on the slippages, as it is easy to get stuck, especially after rain.