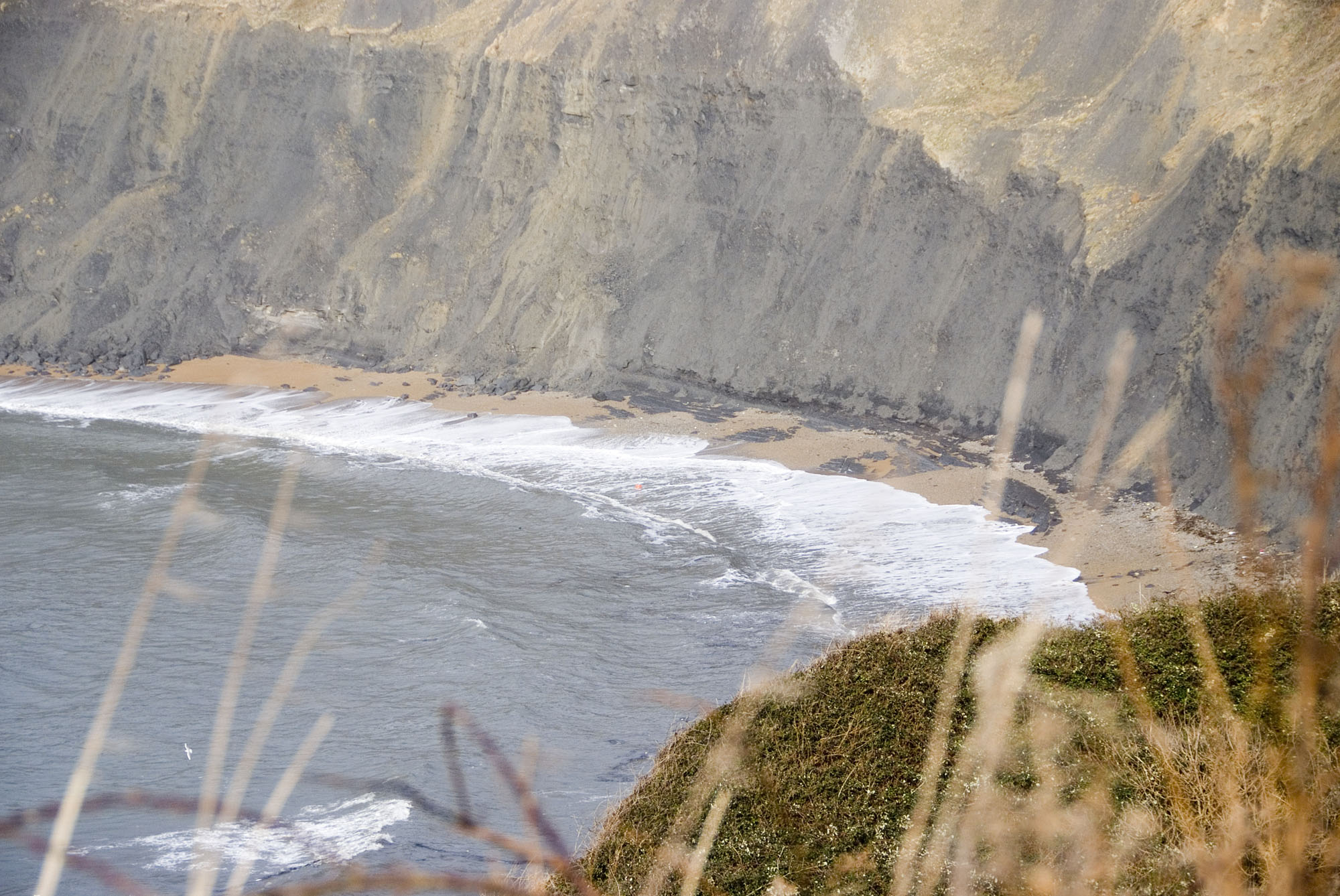 Chapman’s Pool is rich in Upper Jurassic ammonites, reptiles and shells. It is a very long walk down to the beach, but the fossils are often rewarding. It is best to visit during summer months when the sea is not so rough.

♦ Drive to Worth Matravers. You will pass a car park with toilets. Continue through the village all the way until the road passes a farm. Keep going and you will then see another car park.
♦ Park here and follow the footpath to Chapman’s Pool. It is a very long walk down. Once on the beach, head west.
♦ There is now a new footpath down to the sea that avoids the old slippery and steep slope, which was quite dangerous. This location is not easy to access and is only recommended for the more serious fossil hunter.
♦ Ref: 50.59544°N, 2.04745°W

FIND FREQUENCY: ♦♦♦♦ – Chapman’s Pool has yielded more reptile remains than any other Kimmeridge Clay location in the UK. It also has some excellent ammonites, but most of these are found between Kimmeridge Bay and Chapman’s Pool. This stretch of the coastline is often too dangerous for most people to visit, so this guide concentrates on the pool. There are still some lovely fossils to be found here, but hammering on the bedrock and cliffs is not allowed.
CHILDREN: ♦♦ – The site can be very dangerous for collecting fossils due to the tide and regular cliff falls. Therefore, it is not recommended for children.
ACCESS: ♦ – This is a remote location, but is fairly easy to find and has its own car park. However, if you are planning to walk from Chapman’s Pool to the more productive beds at Freshwater Steps, be aware that those locations are some of the hardest in Dorset to access. At some headlands along the coastline, the sea does not actually retreat fully, so you would have to take your shoes and socks off to get past. This can be very dangerous and we do not recommend it.
TYPE: – Fossils can be found on the foreshore or within the cliff face. However, collecting from the cliff face is dangerous and not recommended, but fossils can be collected from the foreshore, especially in areas of shingle.

This site is part of the Jurassic World Heritage Coastline, so follow the Fossil Code of Conduct. This is an SSSI, so the use of hammers on the bedrock and cliffs is not allowed. In addition, the cliffs are extremely dangerous, so collecting directly from them is extremely inadvisable. However, fossils are found washed up on the foreshore and so hammers are not required.

The ammonite, Pavlovia rotunda can also be found flattened in the foreshore clays. We do not recommend collecting this ammonite, as it is too fragile and best left for others to see. Instead, try to find nodules (Rotunda Nodules), as these can contain superb ammonites, but these are not a common as they once were. However, large ammonites have been found loose, which have fallen out of boulders and many fragments can lie scattered along the beach.

If you carry on to Freshwater Steps, which is about 2.5km from the pool, the foreshore and cliff yields the crinoid Saccocoma, which is pyritised. Freshwater Steps is equal distance between Chapman’s Pool and Kimmeridge Bay. In the cliffs, many reptilian remains, including plesiosaurs, ichthyosaurs, crocodiles, pterosaurs and chelonians, have been found here.

The rocks at Chapman’s Pool are Upper Jurassic in age When walking down the footpath from the car park at Chapman’s Pool and over the field, you may notice some yellow/white rock fragments scattered along the fields. This is Portland Cherty Series rock from the Portland Stone Formation, which forms the crest of nearby Hounstout Cliff and overlies the rock sequence from the Portland Sand Formation; namely the Houns-tout Marls, Houns-Tout Clay and the Rynchonella Marls.

At the base of the cliff is Blake’s Bed 2,  above which are the Rotunda Shales, which contain the ammonite Pavlovia rotunda. These are from the Pavlovia Zone and there once were plenty of these, but they are now not as common.

West of Chapman’s Pool is one of the most dangerous places to collect along the Dorset coast. The tides always reach the base of the cliff and you can easily become cut off. The walk is also a long way around several headlands. Therefore, it is essential that you check and double check tide times before you go. Also be aware of double tides. If you plan the whole walk from Chapman’s Pool to Kimmeridge Bay, you will have little time to collect and should try to reach your final destination before the tide starts to turn. The tides come in very quickly.

Falling shale is frequent. Therefore, hard hats should be worn at all times and you should try to keep away from the base of the cliff. Hammers are not allowed to be used on the cliff or bedrock at Chapman’s Pool. If you do take a hammer, be warned that breaking rocks may cause rocks and shale to fall from the cliff.

The use of hammers on the bedrock and cliffs is not allowed. Hard hats should be worn at all times, as the cliffs are unstable. Take plenty of drink and food, if planning the full walk.

This location is part of the Smedmore Estate. Please be aware that fossil collecting at this site is not permissible. UK Fossils strongly advice that any fossils that are found here are photographed and left for others to enjoy. Removal of any fossils or rocks from this location is totally forbidden