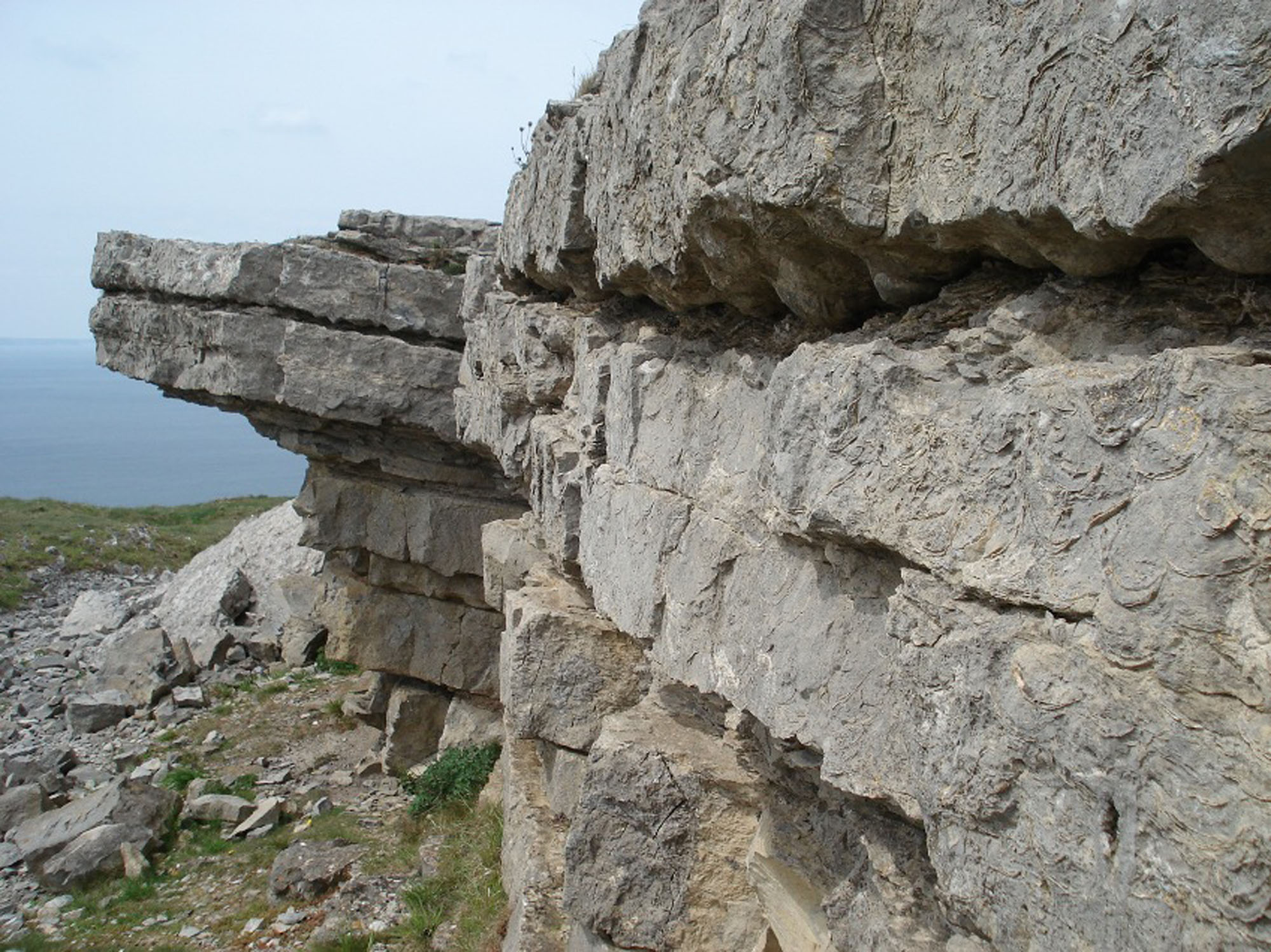 Great Orme’s Head is a massive headland north of Llandudno, which is carved out of Carboniferous Limestone. Numerous natural exposures can be examined, as well as old quarry faces. In fact, a whole day can be spent exploring here.

♦ There is plenty to explore along the toll-road from Llandudno that leads you up to the summit of Great Orme’s Head. From the summit, you can walk from the visitors’ centre and investigate limestone outcrops. The tramway also takes you to the summit and there are many paths in the area to explore.
♦ You are largely free to roam across the headland. To access it by car, there is a toll charge and the tramway also involves a charge.
♦ This location is Carboniferous in age (Carboniferous Limestone D Zone).
♦ Ref: 53.34177, 3.86518

FIND FREQUENCY: ♦♦♦ – The headland covers such a large area and there are so many limestone exposures to investigate that a whole day can be spent exploring here. There are limestone pavements and glacial erratics, and, in some places, the exposed limestone layers are packed with brachiopods and corals.
CHILDREN: ♦♦♦♦♦ – There are various tourist attractions on Great Orme’s Head, such as a visitors’ centre, a tramway, Bronze Age mines and an artificial ski slope. There are also many walks across the summit of the headland and, of course, there is fossil hunting. This is a location for everyone.
ACCESS: ♦♦♦♦♦ – The summit of the headland can be reached in a variety of ways. You can walk from Llandudno or take the tramway. There is also a scenic drive from the town along a toll road. In fact, all the areas of interest are easily accessible.
TYPE: – Fossils can be found in scree below old quarry workings and loose anywhere natural weathering occurs.

One of the best places to look for fossils at this location is near to the summit car park. From here, walk in the opposite direction from the visitors’ centre, towards an old quarry face that is surrounded by limestone pebbles that have been arranged into peoples’ initials and names, and so on. To the left of this, there is a shallow gully, with exposed limestone sides and scree at its base.

Walk along this gully and investigate the scree as you go. At the end of it, you will come to an area where large blocks have fallen from the face. These are covered by very large brachiopod casts and moulds. The rock face is also packed with these fossils.

Smaller pieces of limestone with brachiopods and corals can be collected. However, do not disturb the larger pieces. Rather, leave them for future visitors to enjoy.

There are many natural and artificial exposures on the headland. The natural ones tend to be covered by lichens and fossils are hard to find, but the manmade exposures are often full of easily visible fossils. Other features of interest include numerous limestone pavements and glacial erratics. There is an information board at the summit showing you the location of these.

The Carboniferous Limestone at Great Orme’s Head is from the Visean Stage (Lower Carboniferous – Dinantian) which is of Chadian- Brigantian Substage. It is part of the Clwyd Limestone Group, which is about 330myrs old.

In North Wales, the the Clwyd Limestone Group crop out extensively east of the Clwydian Range, through Llangollen, around Oswestry, from Colwyn Baythrough Denbigh, across the south and east of Angleseyand on the Great and Little Ormes

At the Great Orme the basement is not exposed. The succession comprises five formations:-

At some places, there are unprotected drops at the summit of the headland and on its sides. Also, be careful around the old quarry faces and wear sturdy footwear.

All that is needed at this location is a camera, a rucksack and packing material to accommodate your finds. This is a conservation area, so no hammering or other forms of manual extraction should be carried out. When collecting loose fossils, only take a few.

You are largely free to roam across the headland. To access it by car there is a charge of £2.50 and the tramway also carries a charge.