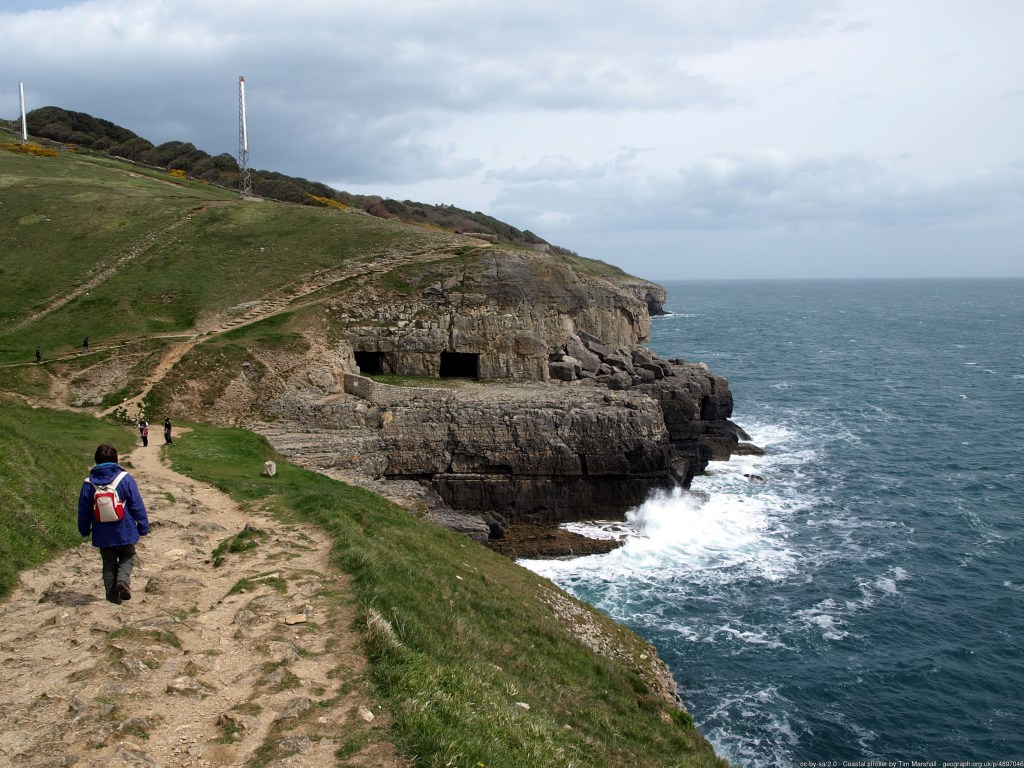 Dancing Ledge and the other disused quarry sites along this dramatic stretch of the East Dorset coast used to be a productive area for the extraction of Purbeck Stone. Now abandoned, the views from these old workings are stunning, even if the fossils are poorly preserved and uncommon. You can stand on Dancing Ledge, or any of the other abandoned quarry sites (such as Winspit, Seacombe or Tilly Whim) along the South West Coastal Path between Kimmeridge and Durlston Bay, watching the waves crashing into the cliffs. These are worth a visit just for the views. And with some persistence, a few fossils might still be found.

Near Tilly Whim Caves, closed because of dangerous conditions in 1976.

♦ Drive to Langton Matravers and you will find a car park to the south of the village, down a narrow road to Spyway Barn.
♦ From here, follow the footpath south through the farm, in a straight line and over the field. You will then come to an old quarry, with a board telling you about Dancing Ledge.
♦ Along the walk, you will pass some stones originally from the old quarry. Part of the footpath (including the steps), is also made from this rock.
♦ Although this location is poor for fossils, there is a spectacular view at the end of the walk.
♦ Ref: 50.60445°N, 2.00577°W

♦ Continue in either direction along the South West Coastal Path. Further quarries, now abandoned, are to be found along the route, although the quarry at St. Aldheim’s Head is still active.

FIND FREQUENCY: ♦ – Dancing Ledge has some superb views. You can watch the sea crashing against the cliffs, but fossils are few and far between. The same applies to the other quarries but it is possible to still find the odd specimen, with a keen eye and a bit of persistence.
CHILDREN: ♦♦ – The walk to the site could be a bit far for younger children. Everyone should be careful to keep well away from the edge of the ledge and cliff. Children must be supervised at all times.
ACCESS: ♦♦ – Dancing Ledge is a remote location with a long walk down a fairly steep hill. While the walk is not too difficult, it is the long climb back up that can be challenging.
TYPE: – Dancing Ledge is an old coastal quarry, cut into the side of a cliff. It has a ledge on which you can stand and watch the sea crashing into the cliffs below.

This site is part of the Jurassic World Heritage Coastline, so follow the Fossil Code of Conduct. This is a SSSI and no hammering is allowed on the bedrock or cliff. Damage has already been caused to the heritage site by people using power tools. This is strictly against SSSI rules and any attempt to ignore them may result in prosecution.

Dancing Ledge is a notable feature of the east coastal section of Dorset. This is a large gently sloping ledge of part of the Portland Cherty Series, with a large abandoned quarry above. It has been said to have received its name from the appearance waves “dancing” on the ledge. Look out for the bird life too, especially puffins.

The best fossils are those found within the boulders on the quarry floor and it is highly unlikely you will see fossils in the cliff face. Any fossils you do find are best photographed at this location and left for other to view.

At Winspit Quarry, fossils are not common, although impressions of the giant Titanites ammonite can be seen in many of the rock faces. Careful searching in the scree and loose material in the vicinity can still bring up the odd fossil from the Portland Formation.

The succession through the Portland Stone Formation (Portland Freestone Member) is exposed at Dancing Ledge and is similar to that found at Seacombe.

From the sea, the lower part of the cliff is a natural cliff and sea ledge exposue of the Cherety Series of the Portland Chert Series (Dancing Ledge Member). The Prickle Bed, a conspicuous, thin and nodular rock lies within this and is often referred toi as Puffin Ledge, as puffins nest here.

The upper part is Portland Freestone that has been quarried. There is a thin bed at the top of the cliff marking the base of the Purbeck Formation.

Dancing Ledge is an old quarry. The actual shore is not accessible, as the sea always reaches the base of the ledge. Keep away from the edge and the quarry cliff faces. In particular, the area at the back of the old quarry (opposite the sea) is overhanging, sot should also be avoided.

The rocks are very hard at Dancing Ledge. Most fossils are found within the boulders on the floor of the quarry. Therefore, the most important bit of equipment to use here is a camera to record what you see.