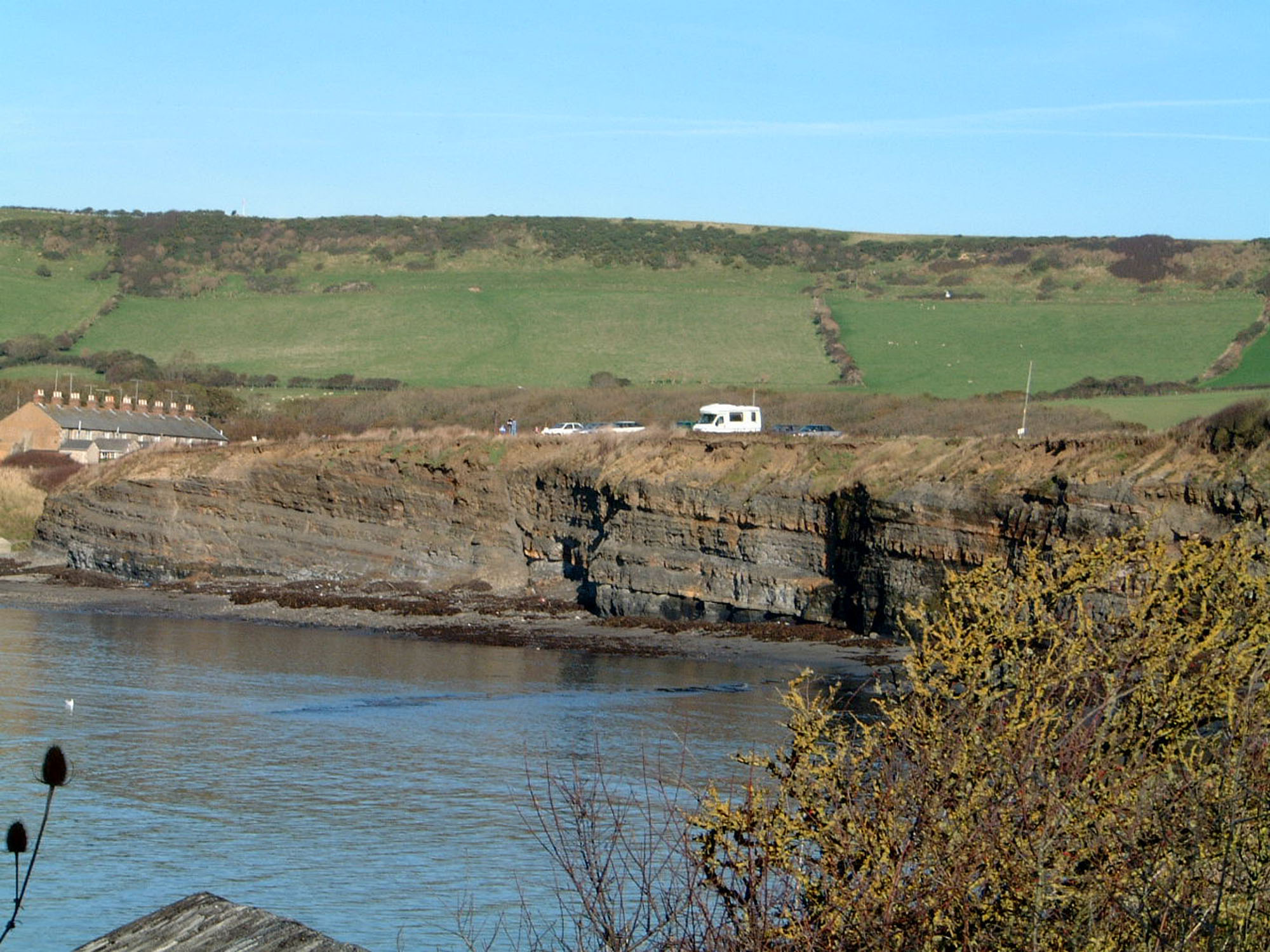 If you are intending to use Kimmeridge Bay as the start of a trip to get to other nearby sites, this can be one of the most dangerous locations for fossil hunting. The tides have cut many people off in the past. Kimmeridge Bay and the adjacent cliffs and foreshore are rich in ammonites, reptiles and shells, but the best collecting sites to the east are a long walk if you are planning to look for fossils along the coastline from Kimmeridge Bay to Chapman’s Pool

♦ Kimmeridge Bay and the adjacent coastline are in one of the most remote parts of the Dorset coast. There is a good road to the bay and car parking, but heading west or east from the bay can be dangerous. There are two methods of access: one is to park at the private car park at
♦ Kimmeridge Bay and walk east; and the other is to park at Chapman’s Pool and walk west. Both are a very long walks.
It is possible to walk the full length from Kimmeridge Bay to Chapman’s Pool, but this gives little time for collecting.
♦ Ref: 50.60890°N, 2.12903°W

FIND FREQUENCY: ♦♦♦ – Collecting at Kimmeridge Bay itself and to the east is prohibited unless prior permission is granted by the owners of the land, the Smedmore Estate (whose address is: Kimmeridge, Wareham, Dorset, BH20 5PD; Tel: 01929 480747). (To the west, access to the coast is restricted due to the army firing range, so is not discussed further in this guide.) However, the area has yielded more reptile remains than any other Kimmeridge Clay location in the UK. It also has some excellent ammonites, but the best are found between Kimmeridge Bay and Chapmanâ€™s Pool. However, as well as the collecting restrictions, this stretch of coastline is often too dangerous for most people to visit. There are still some lovely fossils to be seen within the bay, but hammering and collecting are not usually allowed.
CHILDREN: ♦ – Because locations accessible from Kimmeridge Bay can be very dangerous for collecting fossils due to tides and regular cliff falls, it is not recommended for children. The bay itself much safer.
ACCESS: ♦ – The areas that you can visit from Kimmeridge Bay are some of the most challenging parts of the Dorset coastline. It is not recommended for families or parties, or during winter and spring months. These areas are remote locations. The bay itself is fairly easy to find and has its own car park, but if planning to walk from Kimmeridge Bay to the more productive beds, then this really is one of the hardest locations in Dorset to access. At some headlands along the coastline, the sea does not actually retreat fully, so you have to take your shoes and socks off to get past. This is not recommended.
TYPE: – Fossils can be seen on the foreshore or within the cliff face. Collecting from the cliff face is dangerous and forbidden, but most fossils can be collected (with permission) from the foreshore, especially in areas of shingle.

This site is part of the Jurassic World Heritage Coastline and is a SSSI. No hammers are allowed at this site and collecting is restricted within the bay itself and the coastline to Chapman’s pool (see above). The cliffs are extremely dangerous. However, fossils can be found washed up on the foreshore and so hammers are not required.

The first section of cliffs does not contain any fossils, but the eastern area of the bay is where the fossiliferous beds begin. The best fossils are found along the foreshore among the shingle. Most can be collected without any tools, which is fortunate, since hammers are not allowed.

The best area to collect from is at Freshwater Steps, but this is simply too dangerous and remote for most people to visit.

Kimmeridge Bay is a fantastic place for geology and the views are magnificent from the tops of the cliffs. It is also one of the most peaceful and quiet places alone the Dorset Coast.

The section eastwards allows the most complete and thickest section through the Upper Kimmeridge Clay in Britain to be seen, and exposes the strata of the Bolonian Secondary Standard Stage in their entirety. Over 243m of Kimmeridge Clay is exposed along this section.

The shale beds can be seen first at Hen Cliff, just east of Clavell Tower. There is no route up the cliffs at this point, so low tides are required both here and eastwards to Yellow Ledges and Burning Beach. Yellow Ledges is marked by a yellow stone band of dolomite.

The vertical cliffs are prone to rock falls and extreme care needs to be taken of being cut off by a rising tide. Eventually, you reach Freshwater Steps and Clavell’s Hard, with Rope Lake Head some distance away. Finally, Chapman’s Pool can be reached.

At Clavell’s Hard, there is a small waterfall descending over the Kimmeridge Oil Shale. You may notice a pinky colour, which is the result of a fire that burned for many years and is one of the most famous.

At Kimmeridge, the Upper Kimmeridge Clay, in the cliffs east of Kimmeridge Bay, and also west in part of Brandy Bay, corresponds to the Bolonian stage of the Late Jurassic. It includes Yellow Ledge, the Kimmeridge oil shale, Rope Lake Head Stone Band, White Band and associated shales etc.

At Kimmeridge, the Lower Kimmeridge Clay, within Kimmeridge Bay, corresponds to the Kimmeridgian stage of the Late Jurassic and includes the Flats , Washing Ledge, Maple Ledge Dolomite Beds and associated shales etc.

The areas accessible from Kimmeridge Bay are some of the most dangerous places to collect from along the Dorset coast. The tides always reach the base of the cliffs and can easily cut you off. They are also an extremely long walks around several headlands. Therefore, it is essential that you check and double check tide times. Be aware also of double tides. If you plan the whole walk from Kimmeridge Bay to Chapman’s Pool, you will have little time to collect and you must reach your destination before the tide starts to turn, as it comes in very quickly. Falling shale is a hazard at Kimmeridge Bay and hard hats should be worn at all times. Keep away from the base of the cliff. In addition, the beach at Kimmeridge Bay is very slippery.

Hammers are not allowed and should not be used. Hard hats should be worn at all times. If picking up loose fossils on the foreshore, bags and containers are suitable for transporting fossils. Take plenty of drink and food if planning the full walk.

This location is part of the Smedmore Estate. Please be aware that fossil collecting at this site is not permissible. UK Fossils strongly advice that any fossils that are found here are photographed and left for others to enjoy. Removal of any fossils or rocks from this location is totally forbidden