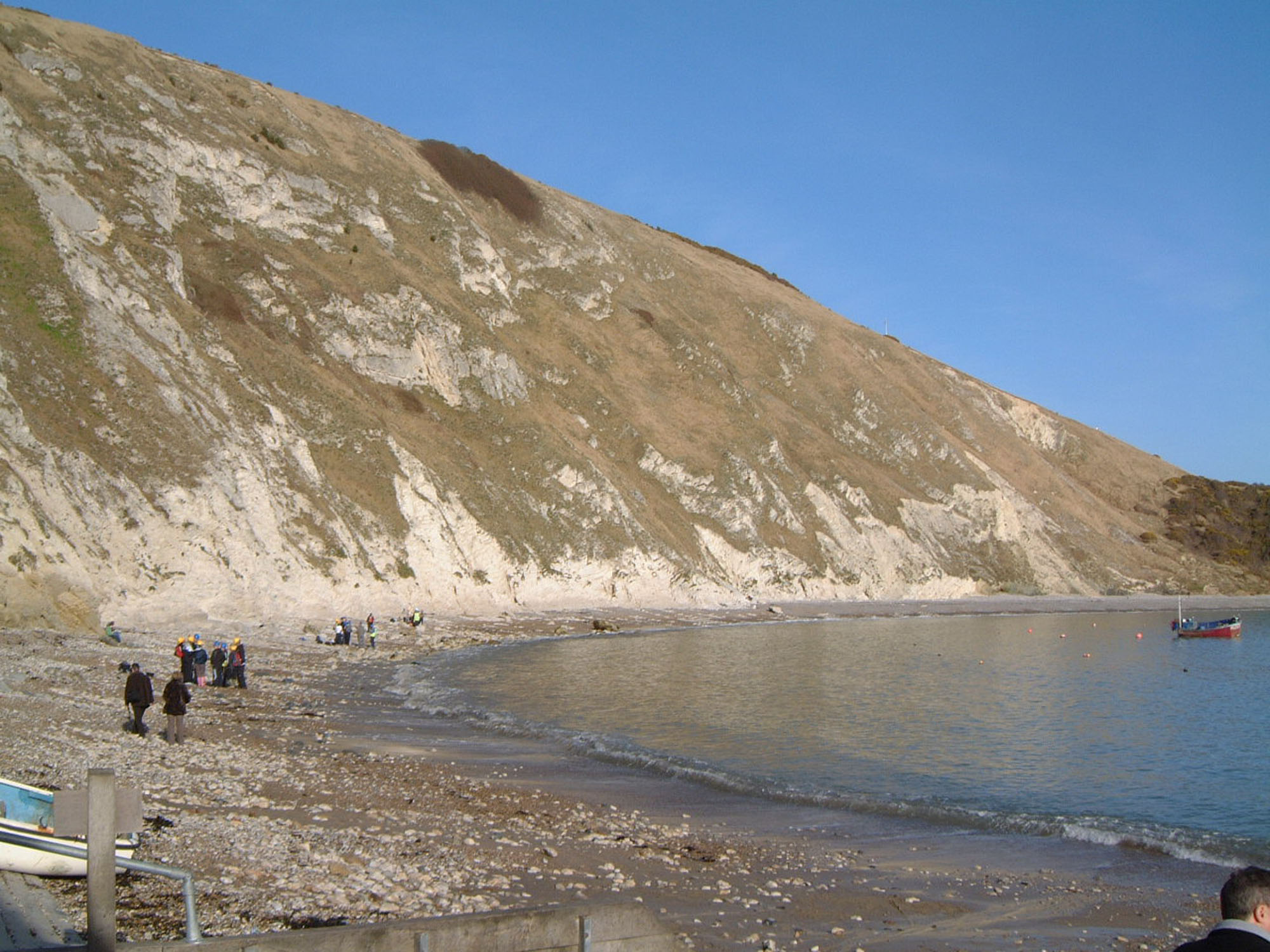 Lulworth Cove is a popular tourist location and its famous ‘Fossil Forest’ can be visited at low tide. It is ideal for children and makes for a great whole day out. However, fossils are less common than at other Dorset locations nearby.

♦ Lulworth Cove is a popular destination and has an enormous car park near the cove, next to the museum and shops.
♦ The beach and car park is clearly sign posted. The car park also has toilets, food and drink. Access to the shore from here is very quick. Just take the road down the hill.
♦ The Fossil Forest, which can be reached by walking east, is only accessible when the army ranges are closed. Access is usually possible on Sundays and bank holidays, and during most of August. There are signposts nearby that provide information on these times. For gun range times, call 0929462721 Ext. 819, or Ext. 824.
♦ To get to the Fossil Forest, first walk up the slight hill to the west side of the cove, from the car park, which overlooks Stair Hole and the cove itself. Then take the path that heads east around the top of the cove, which will take you to the east side of the cove and to the Fossil Forest.
♦ Ref: 50.61866°N, 2.24977°W

FIND FREQUENCY: ♦♦♦ – Most of the fossils at Lulworth are found from what now the Grey Chalk Subgroup and the White Chalk Subgroup (previously the Upper and Lower Chalk), at Bindon Hill (in the middle of the cove). However, they can also be found in the Greensand.
CHILDREN: ♦♦♦♦ – Lulworth Cove is suitable for children, although keep away from the cliff face and watch the tides.
ACCESS: ♦♦♦♦ – The car park at Lulworth Cove is very large and has toilets, a museum and shops. The only problem is if you plan to visit the Fossil Forest, in which case, you will need access to the firing ranges. The route is usually open during August and on Sundays and bank holidays.
TYPE: – Fossils are mostly found on the foreshore at Lulworth Cove, but can also be found at the bottom of scree slopes, slippages and occasionally in the cliff. Hammering the cliff and bedrock is not permitted, because Lulworth Cove is part of the Jurassic Heritage Coastline. However, you are far more likely to find fossils on the foreshore, which can be collected.

This site is part of the Jurassic World Heritage Coastline, so follow the Fossil Code of Conduct. This is a SSSI, so hammering the cliffs and bedrock is not allowed. The land is also private, owned by the army and digging is strictly forbidden in the cliffs. Damage has already been caused to the heritage site by people using power tools. This is strictly against SSSI rules and any attempt to ignore them may result in prosecution.

There is so much at Lulworth Cove that you never know what type of fossil you might come back with. In the middle of the cove, the Upper Cretaceous chalk is the most likely to yield fossils, which you can by simply searching the loose material on the foreshore.

The rocks at the mouth of Lulworth Cove are extremely hard and collecting is quite a challenge because you must not use hammers. Therefore, in general, most fossils are best collected from the loose material on the foreshore of the cove.

The near-circular shape of Lulworth Cove owes its form to a narrow breaching of the outer Portland Stone cliffs of the Upper Jurassic, allowing the sea to erode the softer Purbeck and Wealden Groups of rocks, along with the Gault and Upper Greensand.

The Portland Stone now forms the ‘horns’ of the mouth of the cove. Erosion at the cove slowed dramatically once the soft Wealden Beds had been eroded and the cove began to extend into the Chalk of Bindon Hill.

In the bay, immediately to the west of the cove at Stair Hole, you can see the full succession of the Purbeck Group, including the Cinder Bed of the Lulworth Formation with the remaining beds of the Worbarrow Tout Member below.

The northeast and northwest sides of the cove cut into the Wealden Beds; the Upper Greensand is seen close to the old limekiln and where it has mixed with slipped Chalk, to overlay the Gault on the eastern side of the cove. The Lower Greensand is represented by a thin band of ironstone on the cove’s eastern side. Here, badly preserved gastropods and bivalves can be found.

To the east of the cove, you can see the famous Fossil Forest. Its trees were rooted in what has become known as ‘Great Dirt Bed’, which is on top of the Purbeck limestones and oolites. All that now tends to remain of the trees are donut-shaped stromatolites, which formed around their base when the forest was flooded by the sea. Do not hammer or remove anything from the Fossil Forest.

Common sense when collecting at all locations should be used and prior knowledge of tide times is essential. The main issue one should be aware of is the tide. It is easy to become cut off, so it is important to return at least three hours before high tide. The other danger is from falling debris. Rocks frequently fall due to weather and birds, so hard hats are recommended and you should keep away from the cliffs.

You should not walk to the Fossil Forest if the army range is open. However, there are normally warnings of this danger when the range is open.

The use of hammers is not allowed at this location. However, fossils can easily be seen on the foreshore and these are often loose. Fossils can also be found in chalk blocks. If you can carry them, take them back home to work on using a hammer and chisel.