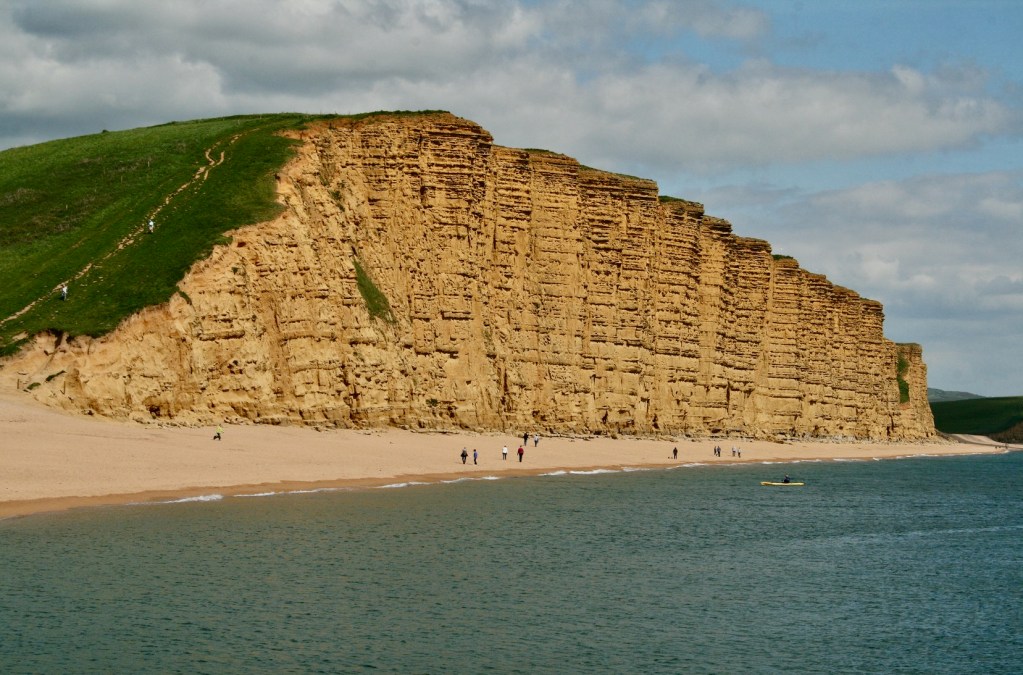 West Bay cliffs are a continuation of Burton Cliff at Burton Bradstock but they are generally much less productive because the Inferior Oolite beds are much thinner here. Rock falls from the high and vertical cliffs of Bridport Sand Formation are on average fairly rare to the east of West Bay or Bridport Harbour and more common at Burton Cliff. Fossil shells and often poorly preserved ammonites can be found in the Bridport Sands. For more productive collecting, a walk east, towards Freshwater and Burton Cliff will probably be more rewarding.

♦ West Bay is easy to access. Its main beach at Bridport is a popular tourist attraction. Follow the signs to West Bay from the Bridport roundabout.
♦ There is a large car park near to the beach. From here, the cliffs can be clearly recognised by their steep, vertical, yellow appearance.
♦ West Bay can also be accessed from Burton Bradstock, if you are planning on visiting the town.
♦ Ref: 50.70866°N, 2.75905°W

FIND FREQUENCY: ♦ – Fossils are not common at West Bay, because cliff falls are quite rare. Ammonites can be found in the Bridport Sands, and trace fossils and fossil shells can be found in the ‘Snuff Boxes’ (see below).
CHILDREN: ♦♦♦ – The large, sandy beach at West Bay is ideal for children, with nearby car parking, toilets and food. However, the beach can be very popular during the summer. Keep children away from the base of the cliff, which is dangerous.
ACCESS: ♦♦♦♦♦ – West Bay is an easy location to access. There is good car parking, with a cafe and toilets. The cliffs are not far from the car park.
TYPE: – Since cliff falls do not occur very often, there is little material on the foreshore to collect from, apart from the ‘Snuff Boxes’, which might contain poorly preserved fossils. Fossils are best found after cliff falls.

This site is part of the Jurassic World Heritage Coastline, so no hammering is allowed on the cliff. The highly unstable cliffs from the Bridport Sand Formation are very unpredictable and can fall at any time. In addition, fossils in the Bridport Sand are not abundant, although small belemnites are common. Poorly preserved ammonites can also be present in some layers, particularly from those higher up the cliff, nearer to the Inferior Oolite. These fossils can be collected on the beach from fallen blocks of the hard calcite-cemented bands. Trace fossils are common (particularly Thalassinoides), which can often be seen weathered out in the honeycombe weathering.

If you are lucky enough to arrive after a cliff fall, there is a thin layer of Inferior Oolite at the top, which can provide fresh exposures of ‘snuff boxes’, which are roughly spherical objects, made up of layer upon layer of corroding iron-stained sediments, which look like rusty tin boxes. Shells can often be seen within the boxes.

The section to be discussed is east of Bridport Harbour, or West Bay,  in the Bridport Sands Formation of the Upper Lias, one of the major sandstones in the Jurassic sequence in Dorset,

The two main cliffs at West Bay are West Cliff, also known as Watton Cliff, (see separate section on this website) and East Cliff, which are situated either side of Bridport Harbour. The rocks at East Cliff are similar  to those found further along the beach at Burton Cliff at Burton Bradstock, (see separate section on this website) a few hundred metres way.

Both East Cliff and Burton Cliff cliffs contain the Upper Lias, Lower Jurassic Bridport Sand Formation from the Toarcian Stage. At East Cliff, the top of the cliff reaches (or almost reaches) the base of the Inferior Oolite, whereas Burton Cliff has the full thickness of Middle Jurassic Inferior Oolite , with Frome Clay (formerly Fullers Earth) occupying the uppermost part.

In the most part, East Cliff displays the vertical and straight Bridport Sand Formation, displaying beds of friable sandstone and hard carbonate cemented sandstone. Here, exposures at the base are fossiliferous in places. The carbonate cemented sandstone of the Bridport Sand Formation is blue-grey when unweathered, but has a thick, surface layer of yellow when it becomes weathered, as fine-grained pyrite is oxidised to limonite or goethite. The sands contain belemnites and trace fossils, and the occasional moulds of ammonites. Only moulds are present as their original aragonite shells have been dissolved.

The considerably more fossiliferous Inferior Oolite is not well seen in this cliff and in any case, is not safely accessible in its 46 metre height.  Fallen blocks are sometimes present on the foreshore, although at West Bay the frequency of rock falls is far less than under Burton Cliff, due to the wider beach, which gives additional protection from the erosional forces of the sea.  The thin layer of Inferior Oolite is much thinner than at Burton Bradstock and contains fewer fossils. Blocks from this bed contain the layer with the ‘snuff boxes’ that can sometimes be found on the foreshore. These disc-shaped structures are formed by calcareous organisms forming around a nucleus of fossil fragments. Material was accreted onto the undersides of the growing ‘snuff boxes’, when they were periodically turned over by bottom currents

Access to the beach at West Bay is near to the stream (the River Brit) and 155m east of this point, there is a fault down throwing eastwards that cuts the cliff, dropping the Inferior Oolite capping sufficiently to bring in Fuller’s Earth in a cliff top outcrop.

Common sense when collecting at all locations should be used and prior knowledge of tide times is essential. Care should be taken of tides at all locations. The exposures of fossiliferous limestone at the foot of the cliffs are of course the result of cliff falls. Major falls like this are uncommon, but special care must be taken to watch for areas from where loose material can fall. Wet or frosty weather conditions can cause falls. Some other places such as the low cliffs east of West Bay, some parts of Portland or Chesil Beach could be visited instead. At all times, wear safety helmets and watch out for any dangerous activity in the cliffs. Since this is at the most westerly part of Chesil Beach, there is some risk of being cut off by the tide or swept into the sea in very stormy weather conditions.

West Bay is a location where you have to work hard for your finds. Take a good, strong, heavy hammer and safety goggles to crack open the oolitic rocks. Remember to take plenty of paper to wrap any specimens in.